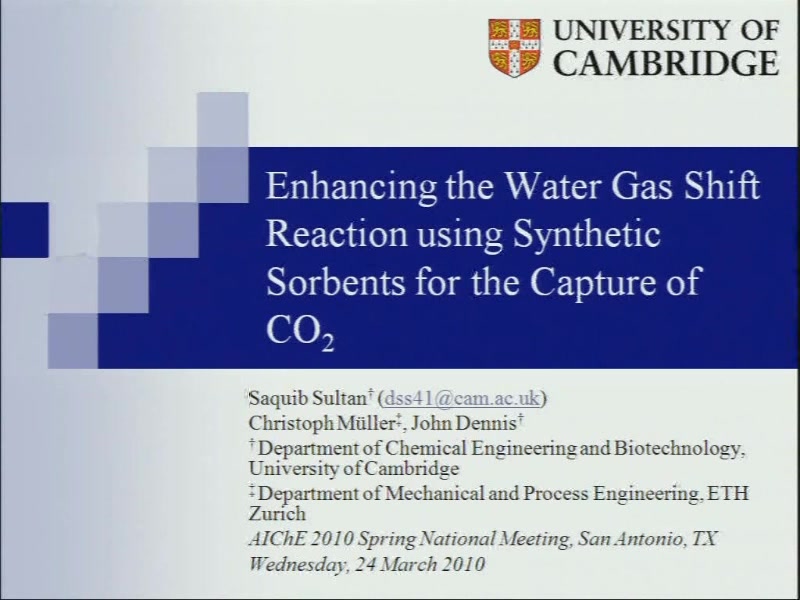 In order to capture the carbon content of coal, one option would be to gasify it with mixtures of, e.g. steam, CO2 and O2, to produce synthesis gas: the water-gas shift (WGS) reaction, CO + H2O <--> CO2 + H2, could then be used to increase the yield of hydrogen. In principle, if the WGS reaction is operating close to thermodynamic equilibrium, the yield of H2 could be enhanced by the simultaneous removal of the CO2 from the gas-phase using a suitable sorbent based on CaO, which is carbonated in: CaO(s) + CO2(g) --> CaCO3(s). This would move the WGS equilibrium to the right, thereby producing H2 with only a small contamination by CO2. The captured CO2 would subsequently be recovered by removing the carbonate and calcining it to generate a pure stream of CO2 which would be ready for sequestration, e.g. in deep saline aquifers. The regenerated calcareous sorbent would then be recycled to the water-gas shift reactor.

This paper describes the results of experiments in which the WGS reaction was conducted in the presence of a CaO-containing sorbent. A major limitation of such a scheme is the degradation of the conversion of the CaO over progressive cycles of carbonation and calcination, particularly with natural sorbents, such as limestone. In our experiments, the sorbent employed was a synthetic one, namely calcium magnesium acetate (CMA, Ca : Mg = 7 : 3, molar basis), the performance of which did not degrade substantially with cycling. The enhanced WGS reaction was conducted at temperatures of 500, 550, 600 and 650°C, with calcination at 800°C, in a packed bed. The gases fed to the reactor were obtained from cylinders (in the cases of CO and inert N2) and steam was generated from deionised water.

From the experiments performed, it was shown that CaO-containing sorbents can affect the WGS in two ways: (i) by catalysis of the reaction itself and (ii) by altering the equilibrium position through abstraction of CO2 from the gas phase. It was found that a trade-off has to be made between the production of H2 and the contamination of the product gas with CO2 (the CO2 slip). For the WGS performed at 600°C, equilibrium conditions were reached while at the lowest experimental temperature of 500°C, there was very little CO2 slip.

Preview Presentation:
Presenter(s):
Saquib Sultan
Once the content has been viewed and you have attested to it, you will be able to download and print a certificate for PDH credits. If you have already viewed this content, please click here to login.

Reducing CO2 Emissions From Refineries Through Chemistry Upgrade
Despite the lack of a global greenhouse gas emission reduction agreement, regional schemes are moving forward to limit CO 2 and other GHG emissions to the...
Structure Sensitivity of Methanol Synthesis From Carbon Dioxide On Copper-Based Catalysts
Thermocatalytic conversion of carbon dioxide to methanol has recently gained considerable attention because it is regarded as an optimal solution to mitigate...