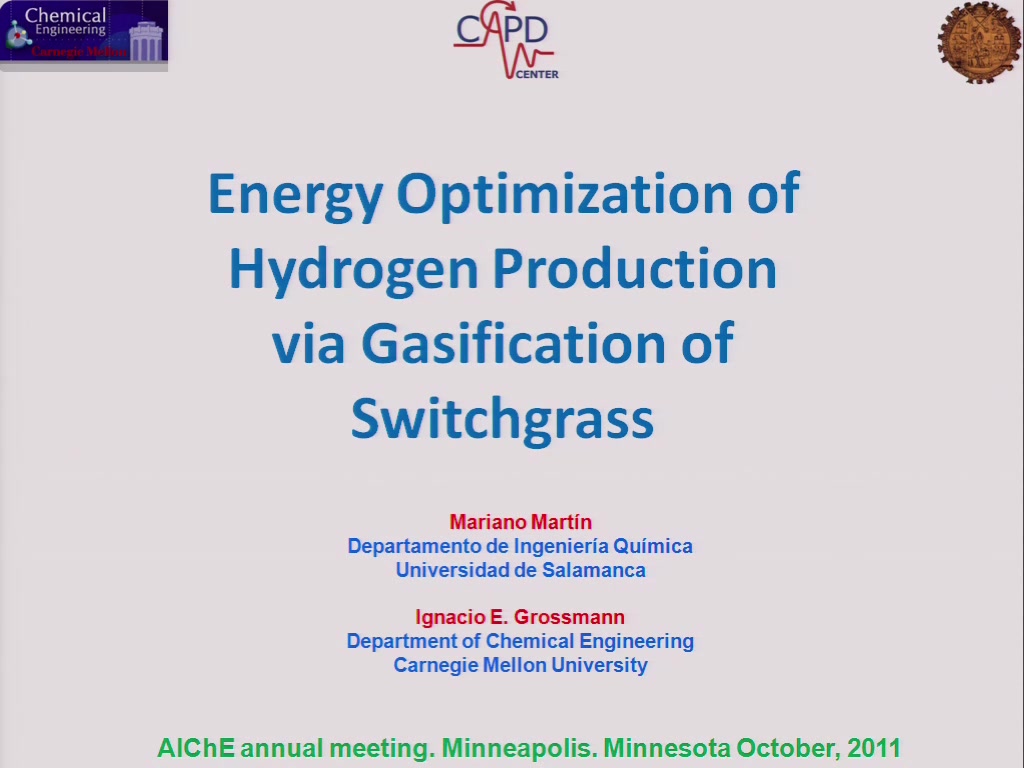 Hydrogen is a promising source of energy for the transportation sector. It is clean and the technology is becoming available as many car manufactures plan to offer it in the future (Cole 2007). However, its deployment in the market is not ready due to the strength and convenience of the liquid fuels industry (the energy density of liquid fuels is much higher), as well as the  lack of infrastructure for hydrogen distribution, handling and storage, resulting in high production costs using current technologies such as reforming of natural gas ($2.6/kg) or water electrolysis ($2.6?$4.2/kg) (Levene, Kroposki, & Sverdrup, 2006). The key issue to make hydrogen an attractive alternative fuel for the transportation sector is to optimize the production process from renewable raw materials instead of the more common processes such as natural gas reforming or electrolysis of water (Rand & Dell, 2008).

Although biomass has been traditionally regarded as a source of liquid biofuels (i.e. bioethanol, green diesel), it can in fact also be considered as a source of hydrogen as has been reported recently. Gasification of biomass generates a fair amount of H2 which has to be purified and/or separated from the other gases resulting from the gasification (Tanksale, Beltramini, & Lu, 2010). Therefore, recent studies have evaluated the production of hydrogen from gasification of biomass using a simulation-based approach selecting the technologies involved with good potential in terms of yield and energy consumption (Feng, Wang,&Min, 2009; Gao, Aimin,&Quan, 2009; Hamelinck & Faaij, 2002; Ji, Feng, & Chen, 2009a, 2009b; Lau et al., 2002; Li, Zeng, & Fan, 2010; Mueller-langer, Tzimas, Kalschmitt, & Peteves, 2007).

In this paper we address the conceptual design for the production of hydrogen from lignocellulosic raw materials. The optimization of the process is formulated as an MINLP using short-cut models, design and empirical correlations for modeling a superstructure embedding two different gasification technologies, direct and indirect gasification, and two reforming modes, partial oxidation or steam reforming. Finally, following recent trends, a water gas shift reactor (WGSR) with membrane separation is used to obtain pure hydrogen.

The problem is solved by constraining the binary variables of the MINLP so as to select each gasifier and reforming mode yielding four NLP's. The operating conditions in the gasifiers and at the WGSR are optimized for hydrogen production in the solution of each NLP. Next, the energy is integrated, and finally, an economic evaluation is performed to determine the production cost of each of the four alternatives. It is shown that indirect gasification with steam reforming is the preferred technology providing higher production yields than the ones reported in the literature for hydrogen from natural gas and at a potentially lower and promising production cost 0.67 $/kg with a yield of 0.11 kg/kg wet biomass.

Finally, an important issue to point out is the fact that this process generates CO2, 1.2 kg/kgBiomass together with  0.11 kgH2 /kgBiomass. It has recently been reported that the production of biodiesel from algae is a promising technology with a yield to biodiesel 10?100 times higher than using the current raw materials like soy bean or rapeedseed (Yusuf, 2007). However, it needs plenty of CO2. This process could be a source for growing the algae. Biodiesel production requires in the range of 3.6 kg of CO2 per kg of biodiesel (Pate, 2008; Sazdanoff, 2006). Thus, on a kg of biomass basis, it would be possible to obtain 0.33 kgBiodiesel/kgBiomass together with the hydrogen produced which provides full use of the biomass while producing short-term and long term biofuels with good integration of different processes.  According to the DOE, by using algae for the production of biodiesel it would be possible to meet the demand for biodiesel with 2?5% of the current cropland and with no consumption of water, since salt water can also be used.

Ji, P., Feng, W., & Chen, B. (2009b). Comprehensive simulation of an intensified process for H2 production from steam gasification of biomass. Industrial and Engineering Chemistry Research, 48, 3909?3920.

Preview Presentation:
Presenter(s):
Mariano Martín
Once the content has been viewed and you have attested to it, you will be able to download and print a certificate for PDH credits. If you have already viewed this content, please click here to login.

Effect of Fast Pyrolysis Conditions on Structural Transformation and Reactivity of Herbaceous Biomasses at High Temperatures
Fast pyrolysis of wheat straw and rice husks was carried out in an entrained-flow reactor (EFR) and compared with the results from the wire-mesh reactor (WMR)...
Biomass Thermal Conversion
Papers are on topics related sustatinable supply of a wide variety of biomass feedstocks to meet the needs of evolving liquid fuel demand (transportation and...