Energy Efficiency of Battery Systems with Forced Convection Between Electrodes 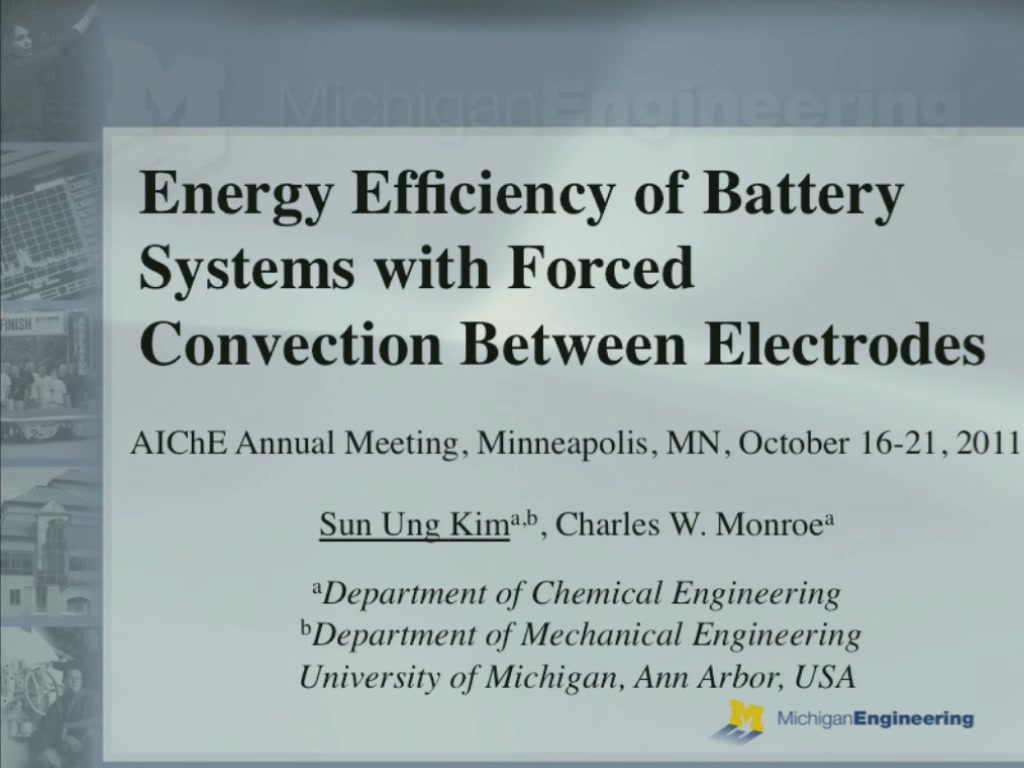 The energy efficiency of an alkaline battery system with forced convective flow between the electrodes has been investigated. Rechargeable alkaline batteries, which depend on the reaction between zinc and manganese dioxide (Zn/MnO2), have been widely used because of their excellent properties such as inexpensiveness, long shelf-life, high-temperature performance, and environmental friendliness comparing to the Leclanche cell or zinc chloride type batteries.1 A full recharge of commercial alkaline AA or AAA type batteries takes, however, more than 10 hours; but, the charge/discharge time is difficult to be reduced because the limiting current iL (the maximum charge-transfer rate) is fixed in a battery system.

In 2010 and 2011, Suppes introduced an interesting new battery configuration, which can in principle reduce charge/discharge times by using coaxial liquid flow to control the limiting current, iL.2,3 The Suppes system uses a mechanical pump to drive fluid between porous electrodes as the battery operates, so as to manipulate the concentration distributions of ions in the separator region. We applied the Nernst-Planck dilute-solution theory4-7 to model this battery configuration. The model allows the limiting currents, iL, to be calculated in terms of a Peclet number, Peforced, which quantifies the dimensionless rate of forced convection. In this presentation, we will show quantitatively how a pump can be used to adjust the maximum charge/discharge rate of the Suppes flow battery.

Even though forced convection can in principle reduce the charge/discharge time as much as needed, the rate increase is necessarily accompanied by a power loss due to concentration overpotential, as shown in Fig. 1. The power loss is increased because the larger Peforced leads to a non-uniform concentration distribution in the battery, inducing a diffusion potential ΔΦdiffusion. In addition, an analysis with the Ergun equation8 shows that significant power may be lost to fluid friction in the porous electrodes and separator. The fluid friction causes a significant pressure-head loss that increases with the forced-convection rate parameter Peforced; therefore, the use of forced flow to enhance rates may be more effective for increasing battery charge rates than for increasing rates of discharge.

Once the energy losses are calculated, the task of evaluating the energy and power efficiency of the battery presents itself. We investigate the optimal fluid velocity needed to get the highest efficiency from the Suppes flow battery. Also, the comparison of this battery efficiency with the Carnot efficiency will be discussed.

Preview Presentation:
Presenter(s):
Sun Ung Kim
Once the content has been viewed and you have attested to it, you will be able to download and print a certificate for PDH credits. If you have already viewed this content, please click here to login.

Advances in Automation: Wireless the Enabler
Older refineries and petrochemical facilities were built with the minimum amount of instrumentation, only that which was necessary to safely operate the plant...
An Operator Training Simulator (OTS) for a SUPERFLEX(TM) Unit
An Operator Training Simulator (OTS) of a new SUPERFLEXTM unit has been designed and built to provide highly realistic process and operations training to...