Enabling a Selective Dissolution Scheme for the Removal of Fines in Crystallization with a Hydrocyclone: Modeling and Experimental Validation | AIChE
Skip to main content

Enabling a Selective Dissolution Scheme for the Removal of Fines in Crystallization with a Hydrocyclone: Modeling and Experimental Validation 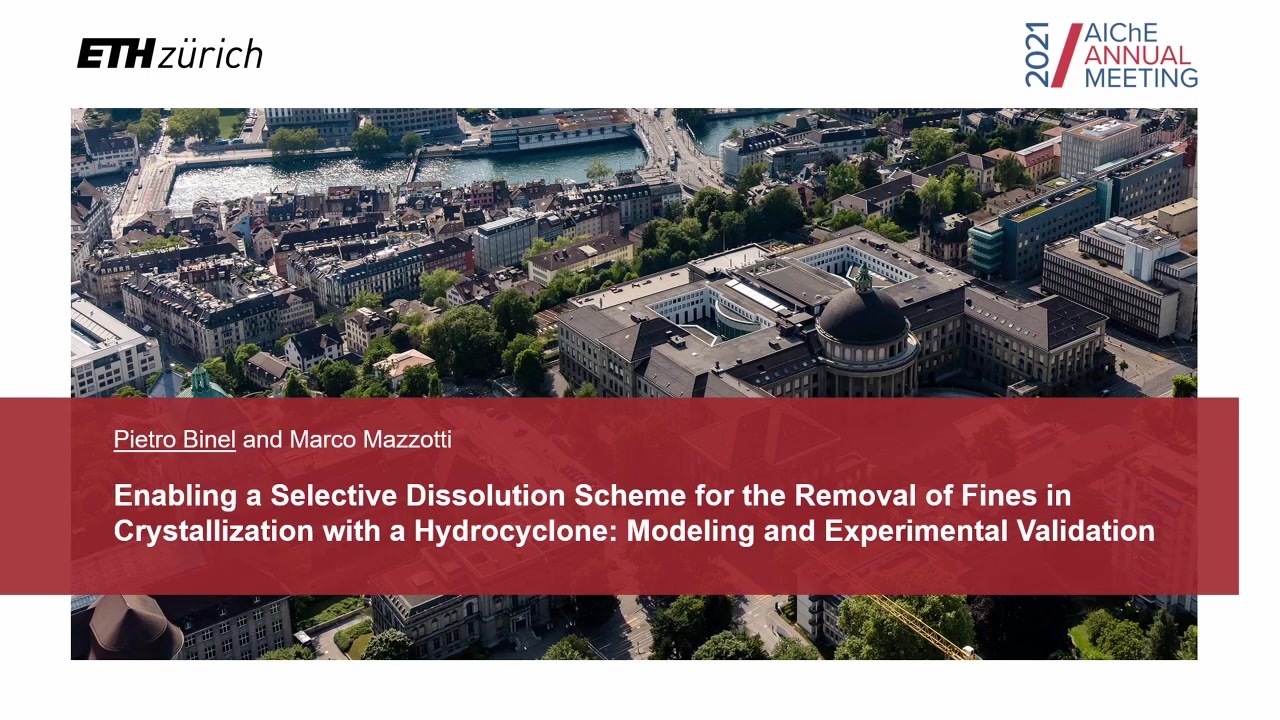 Effective methods to tune the particle size distribution (PSD) are of major interest in the field of crystallization, with the aim of facilitating the downstream processing, improving the mechanical properties of the powder, and, in the case of crystalline pharmaceuticals, modulating the absorption rate of the active ingredient in the human body.

Fines, i.e., crystals of a few tenths of micrometers in size, are often an undesired portion of the PSD, as they are responsible for extended filtration times. For their removal, temperature cycling is usually applied, consisting of one or more repetitions of a partial dissolution step followed by a growth step [1,2]. Temperature cycling has the advantage of being a very simple procedure; however, depending on the PSD and on the compound-specific behavior of crystallization, its efficiency may be limited, and the outcome may not be well predictable. Two factors limit the efficiency and predictability of temperature cycling. First, the partial dissolution step is non-selective, as it acts on the whole suspension and also affects larger crystals, thus decreasing the productivity; second, the evolution of the PSD strictly depends on the kinetics of dissolution and growth, which are generally unknown, and require tedious lab-work to be evaluated.

To address both shortcomings of temperature cycling, we have proposed and analyzed in detail through modeling an alternate process featuring a hydrocyclone [3], referred to as a selective dissolution process and outlined in Figure 1a. Hydrocyclones are common and inexpensive devices employed in several fields of chemical engineering, where they can act as classifiers to separate particles based on their size [4]. In the selective dissolution process, first the hydrocyclone separates finer from coarser crystals, then the suspension containing the fines is heated, so that only the particles in the targeted size range are dissolved. Further, the separation in the hydrocyclone depends on its design and operating conditions, and on the physical properties of the suspension, thus making the process less reliant on the kinetics of crystallization.

In this contribution we present both the main findings of the above-cited modeling study and the results of novel validation experiments, highlighting the trends and trade-offs that characterize the operation of a hydrocyclone and their effect on the overall performance of the crystallization process. Particular attention is devoted to process design, and a pathway for the selection of a suitable hydrocyclone design for a given target of fines removal is outlined.

The experimental campaign has been performed with Î² L-glutamic acid in water. 3D printing has been exploited to manufacture the hydrocyclones in-house (shown in Figure 1b), so as to enable superior flexibility in the design of units with different geometries. The experimental results demonstrate the advantage of the selective dissolution process over standard temperature cycling, and validate the modeled trends. Finally, the experimental data has been used to fine-tune the model predicting the separation performance of the hydrocyclone, which can be therefore used reliably for process design. 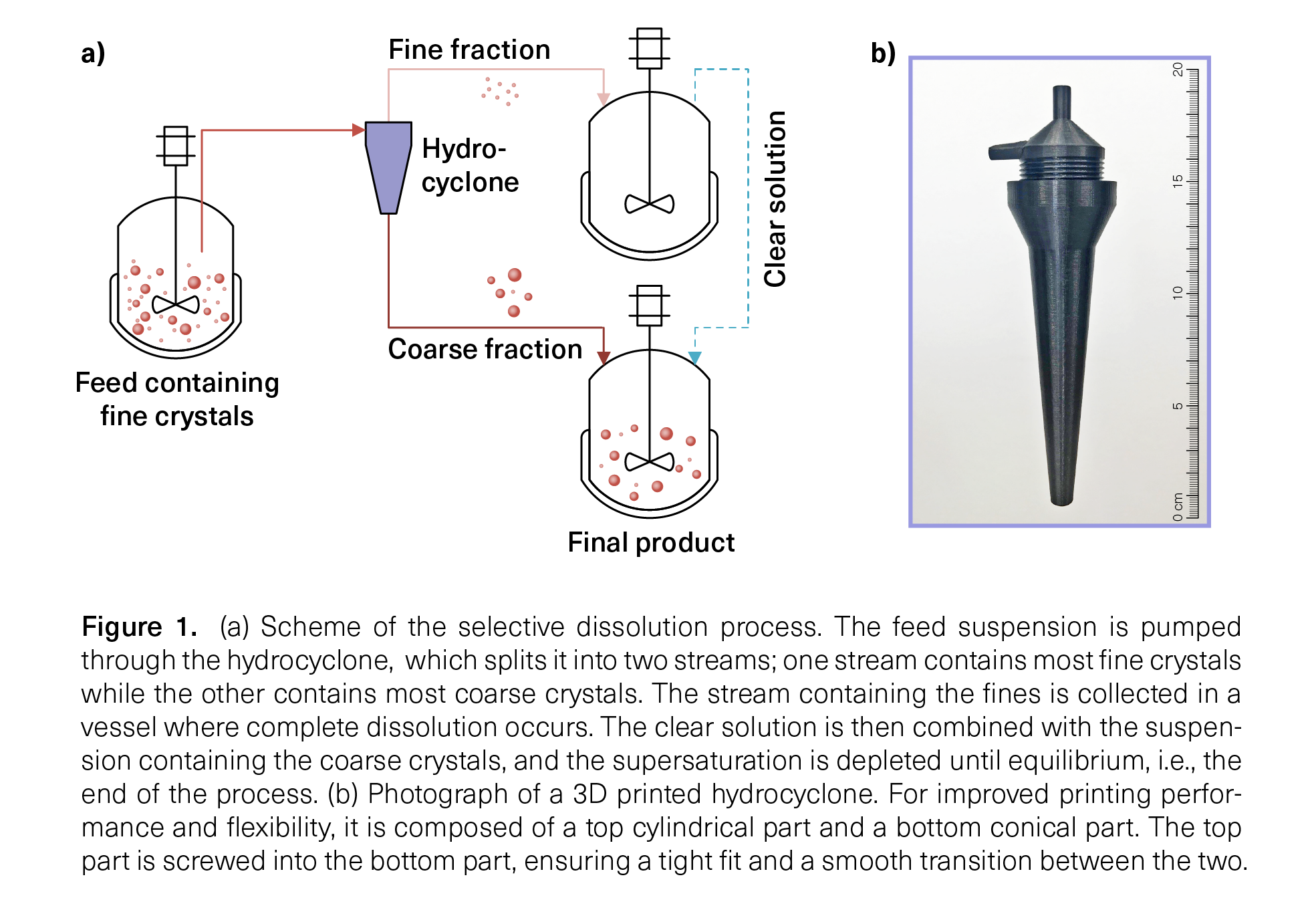 Preview Presentation:
Presenter(s):
Pietro Binel
Marco Mazzotti
Once the content has been viewed and you have attested to it, you will be able to download and print a certificate for PDH credits. If you have already viewed this content, please click here to login.

A Simple Accurate Non-Equilibrium Kink Density Model for Centro-Symmetric Molecules
Layered crystal growth regimes, such as the spiral and 2D nucleation & growth regimes, are preferred for controlled crystallization conditions. In these...
Successes and Failures of Pilot Plants for Technology Commercialization in Chemicals and Fuels: a Look Back over 3 Decades
Pilot plants for commercial deployments in Shell over the past three decades have included fully integrated units, and virtual integration using modeling to...