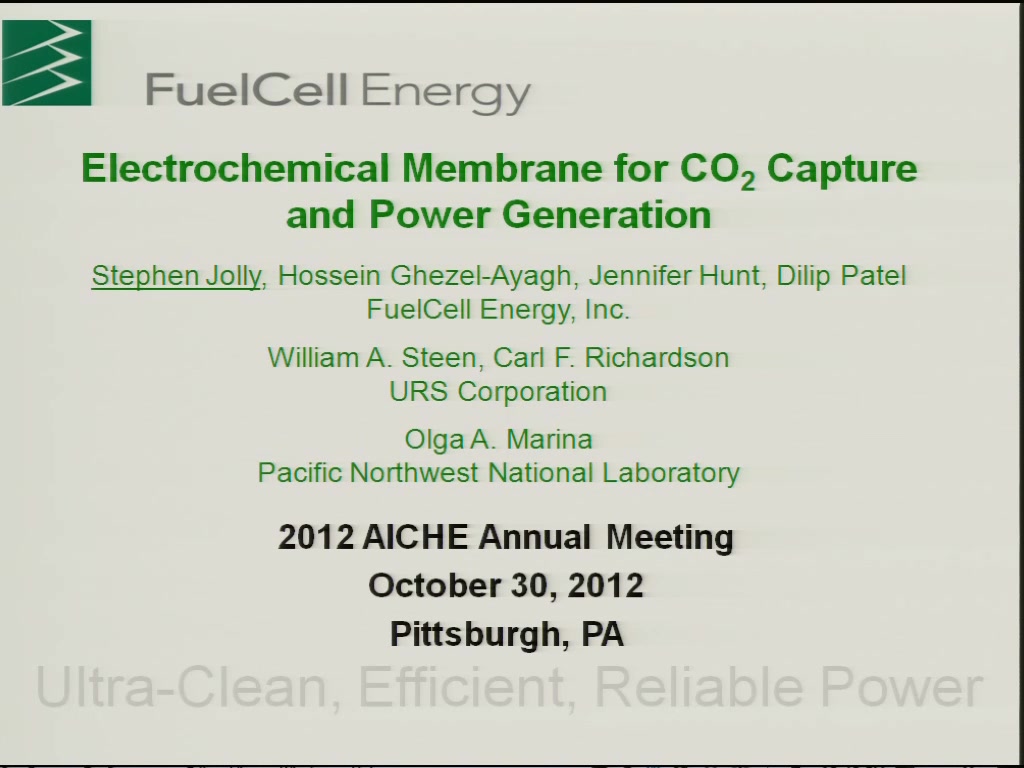 FuelCell Energy, Inc. (FCE) has developed a novel system concept for separation of carbon dioxide (CO2) from greenhouse gas (GHG) emission sources using an electrochemical membrane (ECM). The salient feature of the ECM is its capability to produce electric power while capturing CO2 from flue gas, such as from an existing pulverized coal (PC) plant. Laboratory scale testing of the ECM has verified the feasibility of the technology for CO2 separation from simulated flue gases of PC plants as well as combined cycle power plants and other industrial facilities. Recently, FCE was awarded a contract (DE-FE0007634) from the U.S. Department of Energy to evaluate the use of ECM to efficiently and cost effectively separate CO2 from the emissions of existing coal fired power plants.  The overarching objective of the project is to verify that the ECM can achieve at least 90% CO2 capture from flue gas of an existing PC plant with no more than 35% increase in the cost of electricity (COE) produced by the plant.  The specific objectives and related activities planned for the project include: 1) conduct bench scale tests of a planar membrane assembly consisting of ten or more cells of about 0.8 m2 area each, 2) develop the detailed design for an ECM-based CO2 capture system applied to an existing PC plant, and 3) evaluate the effects of impurities (pollutants such as SO2, NOx, Hg) present in the coal plant flue gas by conducting laboratory scale performance tests of the membrane. The results of this project are anticipated to demonstrate that the ECM is an advanced technology, fabricated from inexpensive materials, based on proven operational track records, modular, scalable to large sizes, and a viable candidate for >90% carbon capture from existing PC plants. In this paper, the fundamentals of ECM technology including: material of construction, principal mechanisms of operation, carbon capture test results and the benefits of applications to PC plants will be presented.

To address the concerns about climate change resulting from emission of CO2 by coal-fueled power plants and other industrial plants, FCE has developed Combined Electric Power and Carbon-dioxide Separation (CEPACS) system concept, as a novel solution (US Patent 7,396,603 B2) for greenhouse gas emission reduction. The CEPACS system utilizes the Company's well-established Direct FuelCell® (DFC®) technology. The system concept works as two devices in one:  it separates the CO2 from the exhaust of other plants such as an existing coal fired plant and simultaneously, using a supplementary fuel, produces clean and environmentally benign electric power at a very high efficiency.

A simplified diagram of the CEPACS system concept is shown in Figure 1.  CO2-containing flue gas from a coal-fired (combustion-based) power plant, such as the exhaust from a PC power plant or other industrial sources, is utilized as the oxidant for the DFC cathode.  The key feature is that the DFC utilizes the CO2 of the flue gas as a reactant for the electrochemical reaction to produce power, while synergistically transferring CO2 from the flue gas to the anode exhaust stream.  A supplementary fuel such as natural gas, biogas from a digester, or syngas from a biomass/coal gasifier is internally reformed in the fuel cell anode to provide the hydrogen needed to complete the electrochemical power generation cycle.

CEPACS separates the CO2 from the flue gas because of the unique underlying mechanism of DFC operation. The operating principle of the DFC is shown in Figure 2, along with the electrochemical reactions involved. In addition to CO2, H2O is produced at the anode as H2 is consumed by the chemical reaction. Overall, the operating mechanism of the DFC results in the separation and transfer of CO2 to the anode exhaust stream with a much reduced flow, compared to the original flue gas. The CO2 rich anode exhaust also contains water vapor which can be condensed, and a small amount of unused fuel (H2) which can be easily separated and either recycled to the fuel cell for achieving ultra-high efficiencies or sold as a byproduct. The captured CO2 can then be processed for sequestration.

Figure 2.   Separation of CO2 in a Carbonate Fuel Cell:

The fuel cells used in the CEPACS system are built from the same material and by the same fabrication processes as those used in the Company's DFC-based power plant products. DFC technology has reached commercial maturity and is readily available as a manufactured product used in building fuel cell stacks.  Figure 3 shows a picture of a unitized fuel cell assembly produced at the Company's manufacturing plant in Torrington, Connecticut.

Currently, the mass produced cells of about 9000 cm2 area, suitable for large-scale applications, are commercially available.  These cells have already been engineered for multi-layer stacking as shown in Figure 4.  The stacks of DFCs are incorporated in modules, which make up the MW scale building blocks for large power plants and CEPACS Systems.

The CEPACS enabling technology has been deployed in MW-scale power plants for stationary power applications in three sizes: 300 kW, 1.4 MW, and 2.8 MW units.  A 1 MW (nominal) unit (DFC1500) installed at a customer site is shown in Figure 5.  FCE services over 50 DFC power plant sites around the globe.

The DFC products are suitable for large multi-MW systems

Monoethanolamine based scrubbing technology (MEA) is considered to be the state-of-the-art for separating CO2.  However, the energy and efficiency penalties of using amines for CO2 capture in PC plants are substantial.  About 22-30% of plant gross power is used up by the amine system, dropping the plant efficiency to <30%.  Operation of the CEPACS system is set apart from other technologies by generation of electric power rather than consuming it, resulting in an increase in the power output of the retrofitted power plant.

A preliminary Technical and Economic Feasibility Study is being performed. The study includes assessments of cost and performance of ECM-based CO2 capture and compression system for retrofitting a 550 MW (net AC) PC plant. While the ECM-based CEPACS system captures 90% of CO2 from the PC plant flue gas, it generates additional (net AC) power after compensating for the auxiliary power requirements of CO2 capture and compression. The net electrical efficiency of the retrofitted PC plant (with CO2 capture) was estimated to be 39.8% (based on higher heating values of coal and natural gas fuels used by PC plant and CEPACS system, respectively).

A first iteration cost estimate for the CO2 capture system has been generated. The CEPACS plant cost and incremental cost of electricity for ECM-based CO2 capture are being finalized. The CEPACS technology has the potential to meet/exceed DOE's goal of <35% increase in COE.

Preview Presentation:
Presenter(s):
Stephen Jolly
Once the content has been viewed and you have attested to it, you will be able to download and print a certificate for PDH credits. If you have already viewed this content, please click here to login.