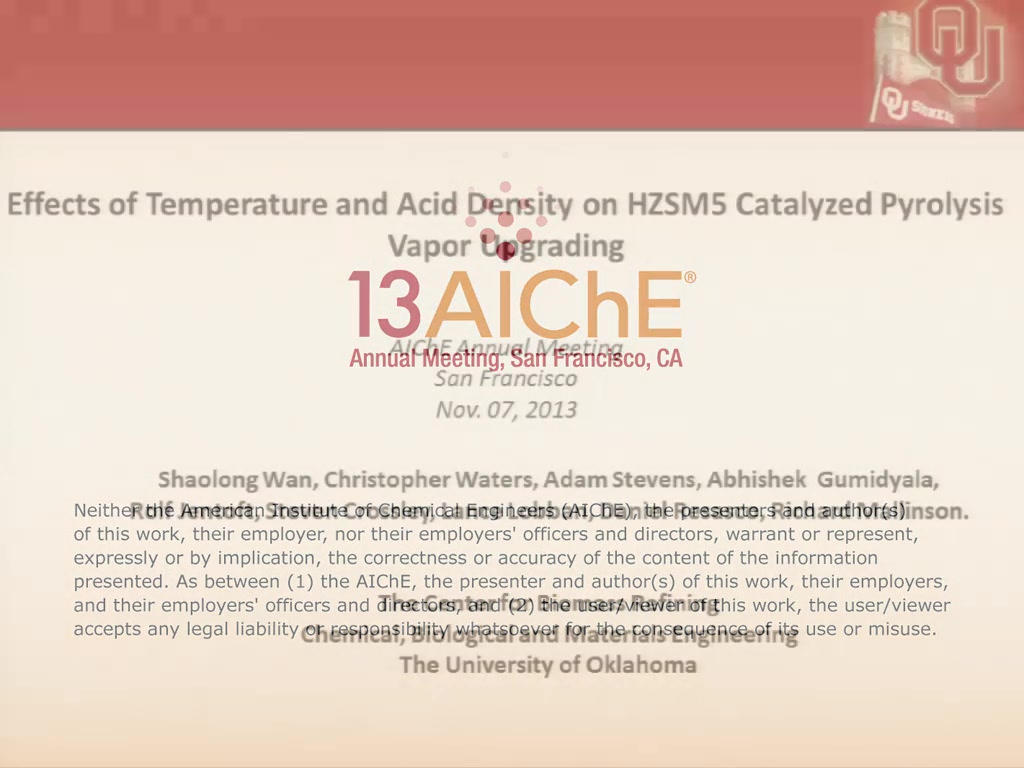 Since the mid 1980s, HZSM-5 has been shown to be a superior catalyst for upgrading the vapors from biomass pyrolysis to produce aromatic hydrocarbons.  However, this comes with relatively low liquid yields, significant coke and gas formation and rapid deactivation.  We have studied HZSM-5 catalysis of biomass pyrolysis vapors in a custom CDS pyroprobe with a separate reactor in order to understand how to increase liquid yield and improve catalyst stability.  Compared with pyrolyzing the catalyst mixed with the biomass, different product selectivities are observed with the separate reactor due primarily to differences in residence time.  The pyroprobe pyrolysis of a biomass-catalyst mixture lasts for seconds and results in high conversion of a primary cellulose decomposition product, levoglucosan, as well as light oxygenates including acetic acid.  When configured in a separate reactor with much shorter residence time, high conversion of the light oxygenates is obtained, but low conversion of levoglucosan is observed.  In this separate configuration, multiple pulses of pyrolysis vapors may be passed over the catalyst, thus allowing the deactivation characteristics to be studied.  For example, at a constant number of acid sites in the catalyst bed, the deactivation rate was found to be much faster with a catalyst containing a higher acid site density.  Different HZSM-5 materials have been tested, with different separate reactor temperatures.  These have included variation in the Si/Al ratio from 40 to 11.5 and the use of core-shell materials with a core of silicalite, an outer layer of HZSM-5, and also a material with a further outer layer of silicalite.  Additionally, the effect of the passivation of surface acidity has been examined.

Preview Presentation:
Presenter(s):
Shaolong Wan
Once the content has been viewed and you have attested to it, you will be able to download and print a certificate for PDH credits. If you have already viewed this content, please click here to login.

New High Capacity Adsorbent for Oxygenate, Nitrogen, and Sulfur Compound Removal from Olefinic C4 Streams
Demands placed upon C4 olefin producers have been pressed in light of the global petrochemical market and has led producers to re-evaluate opportunities for...
Experiences Migrating a Process Control System: “Legacy to Bleeding Edge - How Hard Can It Be”
Borealis' cracker in Stenungsund, Sweden was a very early adopter of APC for olefin plants. Part of Exxon's early 80's roll out of APC based on Honeywell's PMX...