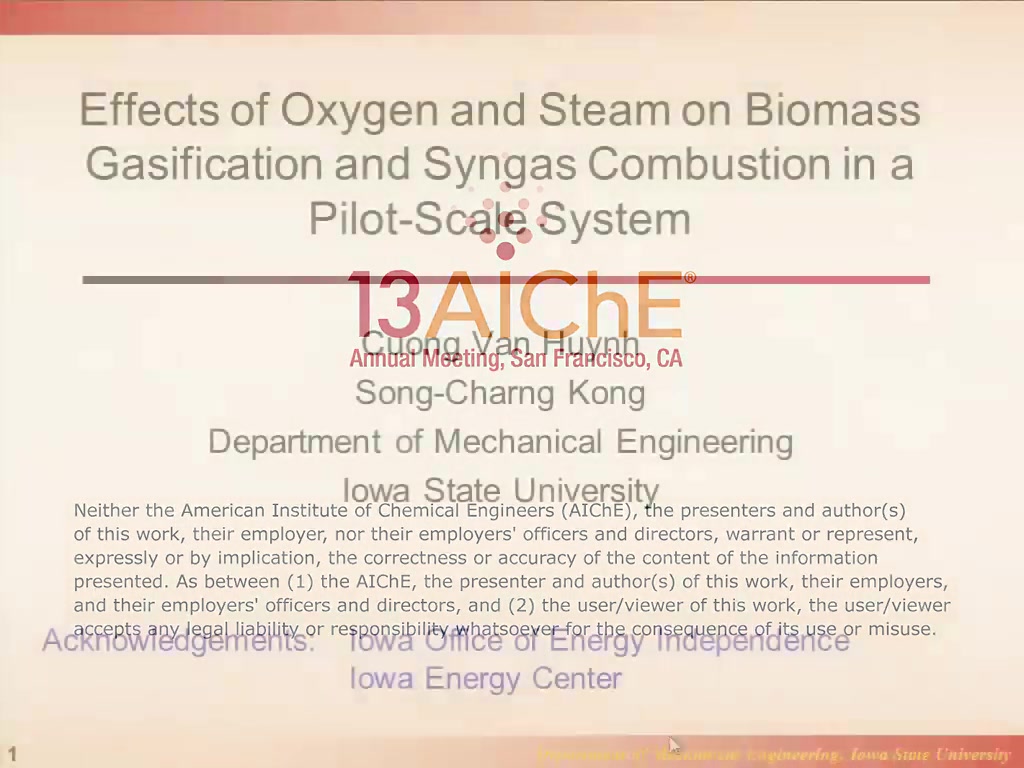 This study is to investigate the characteristics of a biomass gasification and syngas combustion system using mixtures of “oxygen-enriched air” and steam as the gasifying agent for increasing the syngas heating value. This study also aims to characterize the effects of oxygen-and-steam gasification on ammonia concentration that can lead to significant NOx emissions from syngas combustion. Experiments are conducted using a pilot-scale pressurized bubbling fluidized bed gasifier with a capacity of five tons per day , rated 800 kW thermal. Pure oxygen is added to air before mixing with steam for gasification. A significant amount of steam is required to control the reactivity of the system at high oxygen levels. The oxygen content in the enriched air varies from 21 , 45 , to 80 vol% on dry basis , corresponding to 21 , 30 , and 40 vol% on wet basis respectively. The bed temperature is maintained at 800 °C for all tests. Three different biomass feedstocks with nitrogen contents varying from 0.5 to 1.4 wt% are used for study (i.e. , pine , maple-oak mixture , and discarded seed corn). The syngas dry composition is measured using a micro gas chromatograph while ammonia concentration and moisture content are measured using a modified IEA Tar Protocol and Karl Fischer Titration respectively.  Results indicate that oxygen-enriched air and steam gasification favors the production of combustible gas components including hydrogen , carbon monoxide , methane , and lighter hydrocarbons. When 40% oxygen is used , hydrogen increases by 70% , 47% , and 32% for pine , maple-oak , and seed corn respectively , while CO increases by 34% , 18% , and 8.6% respectively. Overall , it is found that oxygen and steam gasification is most effective for feedstock with low nitrogen and moisture contents. Results also show that ammonia and NOx concentrations in syngas increase as oxygen enrichment increases. The lower heating value of syngas can increase by as much as 43% for the feedstock studied. When the oxygen level increases from 21% to 40% , the H2/CO ratio also increases from 0.59 to 0.75 , 0.67 to 0.84 , and 0.36 to 0.43 for pine , maple-oak , and seed corn respectively. Despite the improvement , the H2/CO ratio is still moderate. The moderate H2/CO ratio is explained by the high water content in syngas at high oxygen and steam conditions , indicating a large amount of un-reacted steam at the current gasifier temperature at 800 °C. NOx emissions from combustion of syngas derived from the above gasifier were also measured. The biomass-derived syngas was burned in an industrial burner that was integrated into the gasification system. The burner is rated at 879 kW thermal.  For each set of biomass-derived syngas , NOx emissions were measured at different burner operating conditions including various heat rates and equivalence ratios using emission analyzers with chemiluminescence technology. All the combustion test conditions are in the lean mixture ranges in order to avoid the peak temperature limitation of both the burner and combustion chamber. Results show that NOx emissions using syngas obtained from woody feedstock decrease almost linearly as the combustion mixture becomes leaner and the heat rate decreases. When compared to natural gas , syngas from both woody feedstock generates higher NOx emissions even when the heat rates are comparable , indicating that fuel NOx formation is highly important in biomass-derived syngas combustion. In contrast to syngas from woody feedstock , syngas from seed corn results in peak NOx emissions before NOx decreases with further leaner conditions. The trend is observed for all fuel flow rates and all oxygen-enriched-air and steam conditions of seed corn-derived syngas. Among the three feedstock , seed corn has the highest nitrogen content which yields the highest ammonia concentration in syngas , which , in turn , results in the highest NOx emissions for all test conditions. Overall , the NOx emissions from seed corn-derived syngas combustion are approximately in the range of 450 ~ 900 ppm higher compared to those from wood-derived syngas combustion.

Preview Presentation:
Presenter(s):
Song-Charng Kong
Once the content has been viewed and you have attested to it, you will be able to download and print a certificate for PDH credits. If you have already viewed this content, please click here to login.