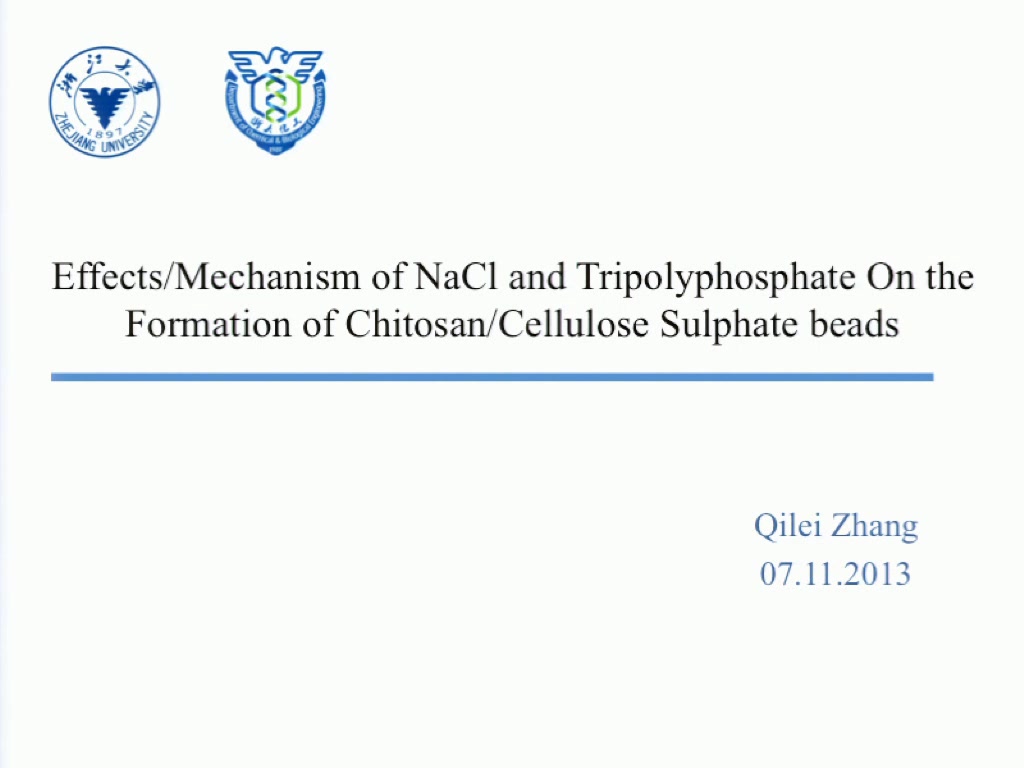 Polyelectrolyte complexes (PECs) are association of complexes formed between oppositely charged polymers due to electrostatic interactions. They have gained importance in modern pharmaceutical technology especially for controlled drug delivery. Chitosan is one of the few polycations that are widely used in the pharmaceutical industry due to its high availability , low cost , biocompatibility and easy modification. In order to improve the stability of chitosan PECs , crosslinking agents are introduced. In practice , crosslinking agents may compete with polyanions for binding sites on chitosan. Therefore , the selection of polyanions and crosslinking agents , together with material addition sequences are important factors in PEC preparing procedures. However , little research has focused on the effect of crosslinking agents to the polyanions in the chitosan PEC preparation. In this study , double-layer chitosan PECs were prepared and studied using sodium cellulose sulphate (NaCS) as the corresponding polyanion. Similar systems have been proved for the potential application as oral colon-specific drug delivery systems. Tripolyphosphate (TPP) was used as a crosslinking agent. The effect of TPP on the PEC formation was investigated by changing the TPP addition sequence. Moreover , sodium chloride (NaCl) was used as an adjusting agent in the chitosan/NaCS/TPP PEC formation processes.

The structure of the microcapsules formed under different TPP addition times was characterized and compared. The mechanism of the crosslinking effect of TPP in the chisotan/NaCS system was investigated and the results showed that TPP had the binding priority in the system , which can significantly affect the chitosan/NaCS PECs formation process. Drug release behaviours from these PEC systems were also characterized.

The effects of NaCl on the microcapsule formation process revealed that the microcapsules without NaCl in the formulation had a thin and transparent layer on the surface , which can be easily detached from the solid inner particle that was enclosed inside. However , the microcapsule prepared with NaCl showed a solid particle structure with a thicker wall and good wall-core interaction (Figure 1). The materials constructing both the wall and the core of the two microcapsules were further analyzed using FTIR , SEM , elemental analysis , UV spectroscopy and the mechanism of NaCl effects was discussed. The effect of adding NaCl on controlled drug release was investigated. The results studied can be applied to different PEC systems , which may further facilitate the development of PEC microcapsules for pharmaceutical applications.

Preview Presentation:
Presenter(s):
Qilei Zhang
Once the content has been viewed and you have attested to it, you will be able to download and print a certificate for PDH credits. If you have already viewed this content, please click here to login.

Can A Design Space Be Built On Material Attributes Alone?
In April, 2009, the PhRMA Drug Product Technical Group sponsored an industry workshop to explore the practicality and limitations of defining a design space in...
Modelling and Informatics Challenges IN Film-BASED Drug Formulations and Manufacture
Drug-loaded thin films are a novel pharmaceutical administration form that is creating an increasing interest in the pharmaceutical industry due to its...