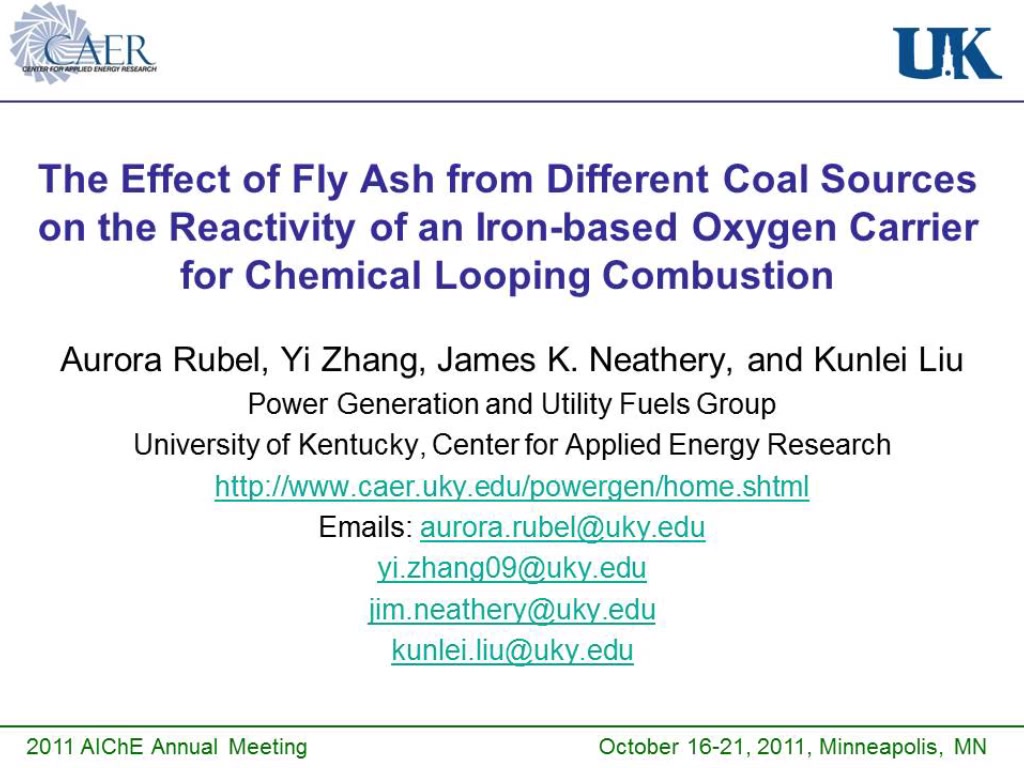 The University of Kentucky, Center for Applied Energy Research is investigating oxygen carriers (OC) for chemical looping combustion (CLC) with the goal of developing a pressurized chemical looping combustion/gasification process for generating electricity from coal. An important issue in the application of CLC to a solid fuel is the effect of ash on the performance of the OC. A previous study using a bituminous coal ash obtained from an electric utility suggested that the ash was not detrimental to the capacity and reactivity of two iron based OCs and iron oxide already present in the ash may have contributed additional OC activity. With the wide variety of coals used to generate electricity world-wide, it is unlikely that all ashes will have the same effect on OCs. This study was undertaken to further investigate the impact on an iron based OC of four different fly ashes representing bituminous, sub-bituminous, and lignite coals. The ashes were collected from power plants in Bulgaria (subbituminous), China (bituminous) and the US (Texas lignite and Powder River Basin subbituminous). These ashes varied in chemical composition as determined from elemental and inorganic analyses. Residual carbon and iron oxide contents varied from 0.07 to 8.52% and 4.22 to 13.71% respectively. These were considered the most important parameters but other oxides which might contribute oxygen (CaO, MgO, SO3) were also present in high concentrations in some of the ashes. Recently these four ashes were used in a comparative study of their effect on the reactivity of an iron based OC to combust a high carbon beneficiated coal char under dry inert gas (argon) conditions in a TGA. As expected the ash effect on the OC varied with the different ashes. The lignite ash did not affect the performance of the OC up to the highest concentration (75%) tested. The Bulgarian subbituminous which had a Fe2O3 concentration of nearly 14% caused a 20% reduction in the performance of the OC which was contrary to anticipated results. The Powder River Basin (PRB) ash produced a slight reduction in carbon removal ability as did the China bituminous ash. However, the results for the China ash which had 8.5% residual carbon indicated that the OC at the right carbon to OC ratio could also combust the residual carbon in the ash as well as the carbon in the fuel char.

The focus of this study was the impact of water vapor (WV) on the ash effect and a comparison to the dry gas results. The four ashes were mixed with a 1:9 by weight mixture of char and OC so that the final mixture of char:OC:ash was 5:45:50. A 2 gram sample was heated in a TGA to 950oC in a 200 ml/min (STP) flow of Argon with 10% WV added. The sample was heated at 950oC for 5 hours. The OC was generated at the CAER by freeze granulation and was 50% Fe2O3 on an Al2O3 support. Control runs included the OC, char, and each ash run alone. A (1:9) char:OC mixture with no ash added was considered the base case. Aliquots of the before and after heating of the sample were submitted for carbon determinations. Reaction rates were determined from the differential weight loss curves obtained by TGA.

The residual carbon in all ashes except the China bituminous ash was less than 1%. Heating the ashes under wet gases removed the 99, 97, 99, 58% of that carbon for the lignite, China , Bulgarian, and PRB ashes respectively. Under a flow of dry argon, comparable carbon removal from the ashes were 89, 15, 78, and 58% indicating the advantage of wet gases providing some gasification of the ash carbon. The effect of gasification on carbon removal was very evident by the increase in carbon removal from the char and char:OC controls from dry to wet gases of 1.2 to 62.3% and 56.7 to 86.8% respectively . The benefits of the OC were improved carbon removal of 27.5% under wet gases and 55.5% under dry gases in comparison to the char alone control. Under wet gas conditions, the char:OC:ash mixtures all had carbon removals equal to or exceeding the zero ash base case indicating that none of the ashes affected the capacity of the OC to oxidize carbon. This was not true for the dry gas runs where the China, Bulgarian, and PRB ash all produced some decrease in the OC capacity.

The influence of the different ashes on the reaction rate of carbon removal from the char was determined from the TGA results. Rates under wet gas conditions were significantly slower than under dry gases. For instance, the maximum char gasification rate (no OC or ash) was -3.5 mg/g/min wet and -8.5 mg/g/min dry. The addition of OC improved the maximum char gasification rate for wet gases to -7.0 mg/g/min and the dry gas rate remained unchanged at -8.4 mg/g/min. Maximum carbon removal rates for the ash mixtures varied from a low of -6.5 mg/g/min for the lignite to a high of -9.9 mg/g/min for the PRB ash under dry condition and from a low of -3.9 mg/g/min for lignite to a high of -6.3 mg/g/min for the PRB ash mixtures. All ashes did reduce the maximum char removal rate under wet gases. Reductions were 45, 13, 16, 10% for lignite, China, Bulgarian, and PRB ashes respectively. Whereas under dry gases, all carbon removal rate except for the lignite were equal to or more than the base case of zero ash. Another outcome from this work was the fact that 50% or more of the carbon was removed during the first 10 minutes of dry gases and 20 minutes for wet gases. Since a CLC process will have short residence time in comparison to the 5 hours used in this study, faster initial reaction rates are important.

Both positive and negative results were obtained for the effect of ash with WV on the performance of the OC. The effect of each ash was dependent on the source coal. WV had a beneficial effect eliminating the detrimental effect of ash seen under dry conditions for the China, Bulgarian, and PRB ashes on the OC capacity to oxidize carbon. The OC had beneficial impact on carbon removal under both wet and dry gas. Carbon oxidation rates were significantly increased by the OC in wet gases over the rate of carbon gasification only. WV negatively impacted the OC’s overall carbon removal rate over comparable dry runs with 50% removal of the carbon requiring 10 minutes under dry conditions and 20 under wet gas conditions. The conclusion was that in the presence of WV, ashes have no effect on the capacity of the OC to oxidize the carbon in the fuel but there was a reduction in the rate of oxidation.

Please Note: Members of the Transport and Energy Processes Division of AIChE are entitled to this content for free. Simply enter the 'promo code' TEPCOD when you are checking out. Only AIChE members are entitled to join the Transport and Energy Processes Division. For more info please click here. click here
Preview Presentation:
Presenter(s):
Aurora M. Rubel
Once the content has been viewed and you have attested to it, you will be able to download and print a certificate for PDH credits. If you have already viewed this content, please click here to login.