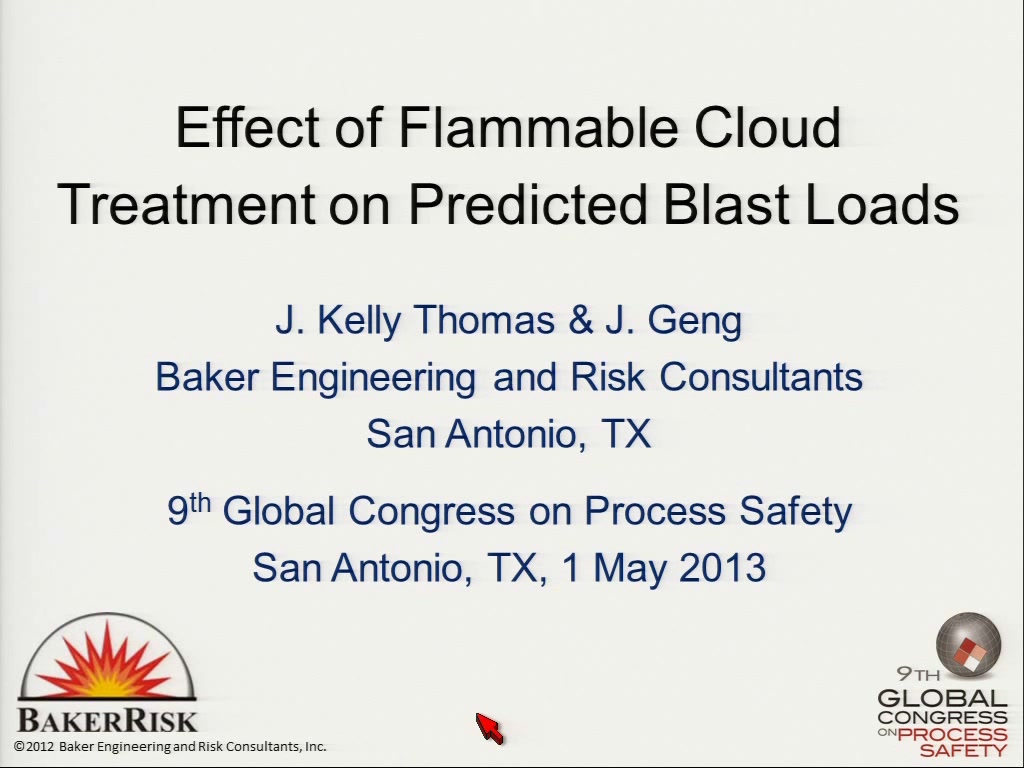 Computational fluid dynamic (CFD) analysis of flammable gas dispersion can provide a realistic evaluation of the resulting flammable gas cloud. CFD dispersion analysis can provide a more realistic assessment of the resulting gas cloud in heavily congested and/or confined environments relative to simplified dispersion analysis methods. In contrast to simplified methods, the gas cloud predicted using CFD analysis in congested/confined environments is typically complex, both in terms of shape and concentration gradients. The blast loads predicted using CFD vapor cloud explosion (VCE) analysis for the resulting flammable gas cloud are dependent upon the representation chosen for the gas cloud. Directly utilizing the predicted dispersed gas cloud, with the corresponding complexities in shape and concentration gradients, requires an extended series of analyses, since both ignition location within the cloud and the cloud location can have a strong influence on the predicted blast load. A common approach is to replace the dispersed gas cloud with a simplified representation for the purposes of performing a CFD VCE blast load assessment, such as a cubic shaped cloud with a uniform near-stoichiometric fuel concentration. This approach is very attractive since it greatly simplifies the blast load assessment. However, the relationship between the blast loads predicted using a simplified cloud representation versus those predicted for the actual dispersed cloud is not well defined.

This paper presents a comparison of the blast loads predicted using the dispersed flammable gas cloud resulting from CFD dispersion analysis versus a simplified representation of the gas cloud. The FLACS CFD code was employed for this purpose. The simplified flammable gas cloud representations used included the ?equivalent stoichiometric? gas cloud parameters developed by GexCon (i.e., the Q9 approach) and utilizing the entire flammable gas volume (i.e., from the lower flammability limit up to the upper flammability limit). Several typical congested volume geometries were employed for this purpose. Blast loads were assessed at locations both within and external to the flammable gas cloud. A range of potential ignition locations were evaluated in order to define the impact of ignition location on the predicted blast load relative to that obtained with the simplified gas cloud representations. It was found that, in general, the blast loads predicted using the equivalent stoichiometric cloud are conservative relative to those predicted for the dispersed cloud. The blast loads predicted using the entire flammable gas cloud volume were much larger than those for the dispersed cloud for the cases evaluated.

Preview Presentation:
Presenter(s):
Jihui Geng
J. Kelly Thomas
Once the content has been viewed and you have attested to it, you will be able to download and print a certificate for PDH credits. If you have already viewed this content, please click here to login.

Burn Injury Caused by Mixing Incompatible Chemicals with Sodium Permanganate
This paper discusses the investigation of an accident caused by the mixing of incompatible chemicals, a strong oxidizing agent with a reducing agent. The exact...
Applications of Cause-Consequence Diagrams in Operational Risk Assessment
Learning Outcomes: Understand the importance of hazard evaluation and risk assessment in the context of and safety and environmental management systems Gain...