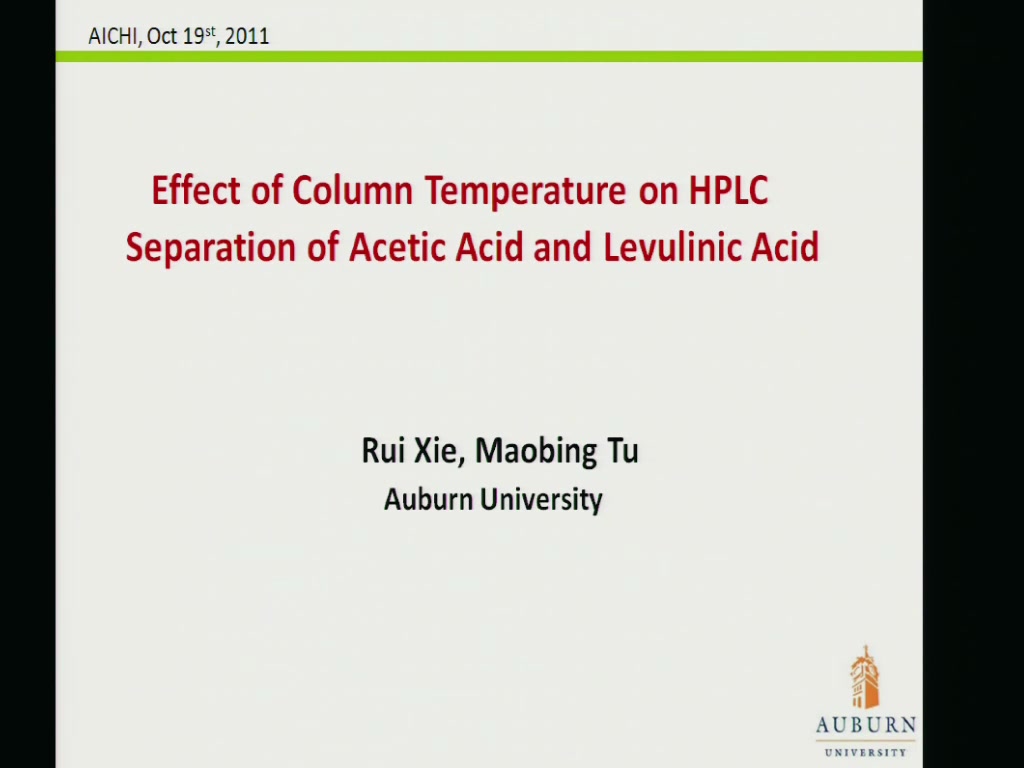 High performance liquid chromatography (HPLC) is a routine method in the analysis of degradation products in the prehydrolysate or the hydrolysis liquor of lignocellulosic biomass. Cation exchange column chromatography with a metal counter ion has been used for the quantitative analysis of carbohydrates with water as the eluent. A cation exchange column with exchangeable hydrogen ion (H+) has been employed in quantification of organic acids and furan derivatives with acidic water as the mobile phase. In particular, the Aminex cation-exchange HPX-87H column has been developed for determining organic acids, furan derivatives and alcohols. Although this column has been broadly used in biomass analysis, potential issues with co-elution of target analytes have been reported by several groups. Scarlata and Hyman (2010) suggested that Aminex HPX-87H column was not suitable for biomass sugar analysis because xylose, galactose and fructose are co-eluted together, and glucose and mannose are co-eluted together. The co-elution of acetic acid and levulinic acid has not been addressed indicated the value of acetic acid in biomass hydrolysate was not reliable at high severity due to continuous degradation of furfural and HMF to levulinic acid.

As one of the principle components in hemicelluloses, acetic acid always has a noticeable amount in the hydrolysate of lignocellulosic biomass. Characterization of this organic acid becomes even more important during fermentation due to its inhibition to the microorganisms. Levulinic acid, one of the normal degradation compounds of HMF, is present in the hydrolysate at low concentrations. The separation of these two acids could be easily ignored due to their co-elution in the hydrolysate liquor. Moreover, the separation performance of HPLC column gradually deteriorates during its lifetime worsening co-elution of these two acids. Solutions to improve the separation of these organic acids included the use of a dual column system, employment of a capillary electrophoresis to separate and quantify the concentration of acetic acid and levulinic acid from softwood hydrolysate. However, no method has been developed to resolve co-eluting acetic acid and levulinic acid by optimizing the HPLC chromatographic conditions. In the present study, the improvement of HPLC separation of acetic acid and levulinic acid on the Aminex HPX-87H column was investigated by varying column temperature, flow rate, and concentration of sulfuric acid in the mobile phase. Resolution and capacity factors were used as indicators for measuring the effectiveness of separation using pure standard compounds as well as real biomass hydrolysate from woody biomass.

Preview Presentation:
Presenter(s):
Rui Xie
Once the content has been viewed and you have attested to it, you will be able to download and print a certificate for PDH credits. If you have already viewed this content, please click here to login.

Comparison of In-Situ and Ex-Situ Catalytic Fast Pyrolysis of Pinewood and Phragmites Australis
One of the routes to provide sustainable chemicals and fuels from renewable sources that is receiving considerable attention is the catalytic pyrolysis of...
Isoconversional Methods Applied to Kinetic Modeling Oxidative Alkaline Pretreatment of Sugarcane Bagasse
Delignification (decrease of lignin content) has shown to be a valid method to significantly increase lignocellulosic feedstocks digestibility. This operation...