Downregulation of the T7 Promoter in E. coli for Enhanced Production of Small Recombinant Spidroins | AIChE
Skip to main content

Downregulation of the T7 Promoter in E. coli for Enhanced Production of Small Recombinant Spidroins 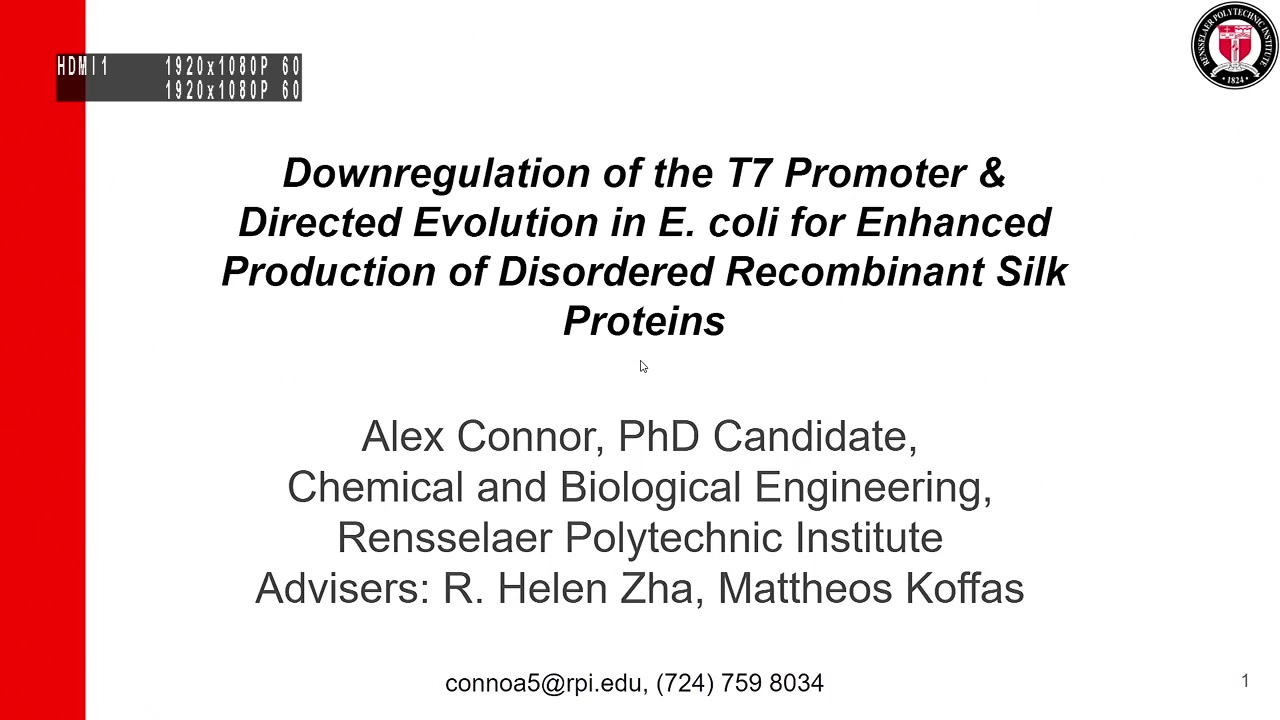 Silk fibroins are some of the most desirable biomaterials due to their unmatched combination of properties that includes, but is not limited to, high toughness, biocompatibility, biodegradability, self-assembly capacity, thermal stability, solvent resistance, and ability to act as an optical waveguide. In addition, silk fibroins can be manufactured into a diverse array of constructs, such as coatings, fibers, and hydrogels, facilitating their use in a wide variety of applications. The ability to produce silk fibroins recombinantly has furthermore facilitated the development of novel silk-mimetic materials with tunable properties. Recombinant proteins mimicking spider silk fibroin (spidroin) are of particular interest due to their exceedingly robust mechanical properties, even in relation to other natural silks or man-made materials such as steel or kevlar. However, recombinant production of spidroin-mimetic proteins still suffers from several fundamental difficulties, including low titers in microbial systems.

To understand cellular mechanisms that affect recombinant spidroin titers and in order to improve production titers, our work has analyzed the expression of a panel of spidroin-mimetic genes in nine different E. coli strains. These genes encode for spidroins that vary in size and self-assembly propensity. The nine E. coli strains have varying attributes that may enhance or impede spidroin expression titers, such as genetic lineage, promoter strength, tRNA availability, chaperone proteins, ability to maintain and express repetitive heterologous genes, and tolerance to toxic and insoluble proteins. Using this diverse set of E. coli strains, the soluble titer, pellet titer, ratio of soluble to insoluble titer, cell growth, and plasmid maintenance were measured for our recombinant spidroin-mimetic proteins, allowing an analysis of the connection between primary sequence design and the characteristics of recombinant production. Our results suggest that downregulating the T7 promoter through recombinant T7 lysozyme facilitates a six-fold increase in the titer of small recombinant spidroins versus standard BL21 and wild-type K-12 strains. Incorporation of T7 lysozyme also promotes a 4-7 fold increase in soluble spidroin titer per unit cell density. Moreover, the presence of T7 lysozyme allows for a high degree of recombinant silk plasmid maintenance, 90% versus 5% and 47% for BL21 and K-12, respectively. For large recombinant silk proteins, our results suggest that increasing the self-assembly propensity of the target construct through primary sequence manipulation does not affect titer for the strain harboring T7 lysozyme. Substantial increases in plasmid maintenance were also observed for the T7 lysozyme strain under these conditions, opposite of what was found for the other E. coli strains.

In addition to T7 inhibition, several other host characteristics were analyzed, and offered further insight into cellular mechanisms to target for improved spidroin production. Importantly, many of these characteristics are not exclusive to E. coli and can readily be applied to other microbial systems, such as overexpression of chaperone proteins and upregulation of tRNA supply. Likewise, the design of the proteins included in this work has overlap with other biomaterials of interest, such as elastin-like peptides and derivatives of collagen. Thus, our study has aimed to further the understanding of how the design of repetitive structural proteins and the characteristics of a microbial host can be leveraged for targeted outcomes during recombinant expression.

Preview Presentation:
Presenter(s):
Alexander Connor
Mattheos Koffas
R. Helen Zha
Once the content has been viewed and you have attested to it, you will be able to download and print a certificate for PDH credits. If you have already viewed this content, please click here to login.

Integrin-targeting Materials in Regenerative Medicine
The ability to direct cell behavior has been central to the success of numerous therapeutics to regenerate tissue or facilitate device integration. Collagen...
Chitosan-Nanoparticle Enhanced Antibiotic and ?-Lactamase Inhibitor to Treat Multi-Drug Resistant Pathogens
Antibiotic resistant bacteria (ARBs) are responsible for at least 2,868,700 infections and 35,900 deaths annually in the United States. Among ARBs, one type...