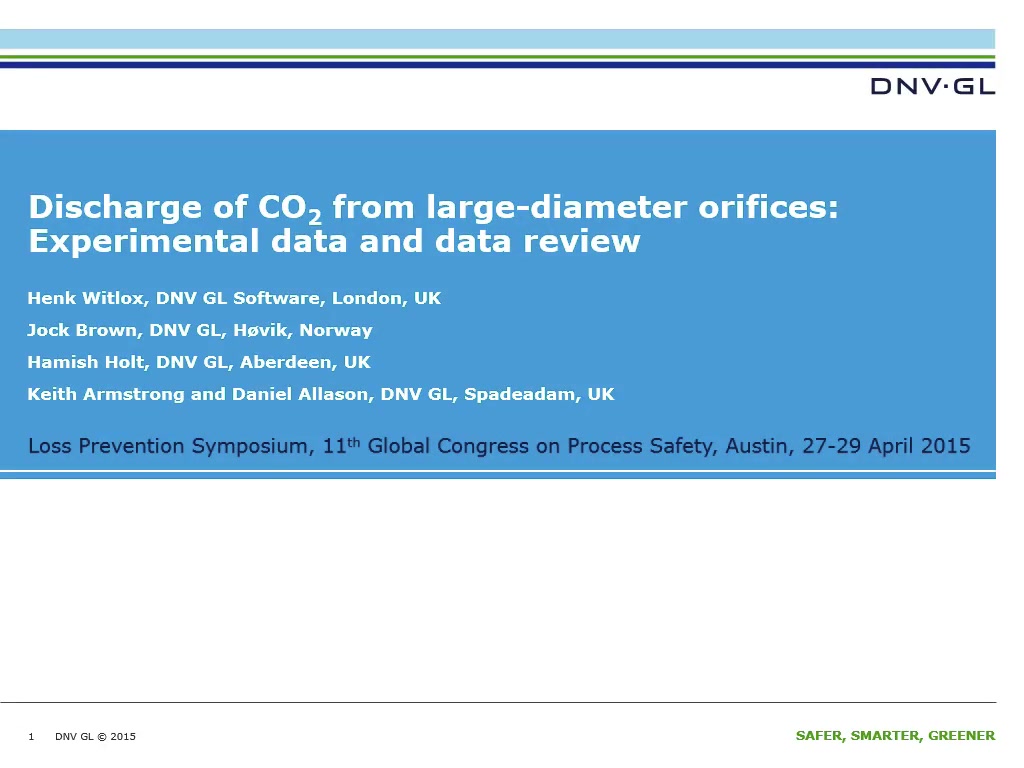 The first experiments undertaken were ‘shock tube’ experiments which involved rapid depressurisation of a 200m long 2” pipe through different orifice diameters and is the subject of an abstract submitted by Hamish Holt.

The subject of this paper is the second experimental programme which involved eight dense phase CO2 experiments at Spadeadam during which dense phase CO2 was released through 1”, 2”, 4” and 6” (25 – 150mm) orifice diameters. The releases were horizontal, released at 1m above the ground, with initial pressures ranging between 36 and 96 barg (520 - 1390psi) and temperatures between 10 and 15°C (50 - 59°F). Measurements included pressure and temperature at several locations in the supply reservoir, feed lines and discharge pipe, while direct flow rate measurements were carried out for the 1” releases only. In addition, field measurements of concentration and temperatures within the release plume were made. Flow rates for the larger releases were estimated by calculation. Setting up the experimental rig and executing the tests involved a number of challenges and some of the lessons learned are detailed in this paper.

This paper describes the above-mentioned 2013 experiments, and subsequently presents the results of a high-level data review of these experiments. The review was carried by DNV GL Software with the purpose of providing an initial assessment of the robustness of the data recorded. To assist in the data review DNV GL Software Phast discharge models were used to provide a reference source. The above experimental data and results of the data review have been made publicly available via the CO2PIPETRANS JIP. This data provides valuable validation material to the CO2 dispersion modelling community.

As part of the data review a method was derived to estimate the time-varying flow rate analytically from derived pressure and temperature measurements in the reservoir. Pressure, temperature and derived flow rate measurements were analysed for the subsequent stages of flow in the experiments. The data review concluded that whilst the data will be very valuable for model validation, the quality of the data measurements for the large-scale diameter experiments is not as high as the previous smaller-scale diameter BP and Shell tests due to difficulties making such accurate measurements at the large scale required.

[Note: The subject of this paper (CO2 1” – 6” releases) and the paper proposed by Hamish Holt (CO2 2” shock tube releases) are complimentary and DNV GL would welcome the opportunity to present both papers within a single extended time slot at the conference.]

Preview Presentation:
Presenter(s):
Henk Witlox
Once the content has been viewed and you have attested to it, you will be able to download and print a certificate for PDH credits. If you have already viewed this content, please click here to login.