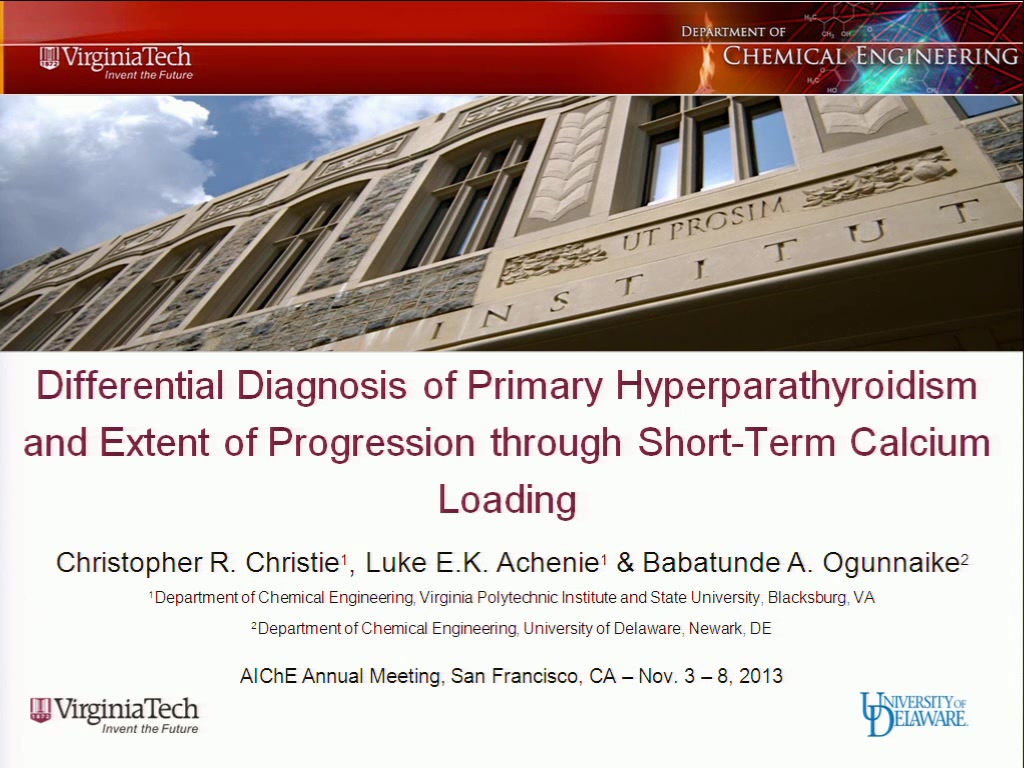 In the human body , total plasma calcium is maintained within a specific range (8.5-10.3 mg/dl) [1] via a regulatory system that employs parathyroid hormone (PTH) and calcitriol (CTL) to moderate Ca flux between the plasma and each of the organs: kidneys , intestines and bones. Disorders in the regulatory organs cause increased hormonal activity which subsequently leads to chronic imbalances in plasma Ca levels. For example , enlarged parathyroid glands (PTG) associated with primary hyperparathyroidism (PHPT) cause over secretion of PTH which leads to high plasma Ca levels (hypercalcemia)[2].     A common feature in the major pathologies associated with hypercalcemia is the excess secretion of PTH and/or PTH-related protein , leading to increased plasma Ca. The three most common pathologies , accounting for 90% of hypercalcemic cases are Familial Benign Hypercalcemia (FBH) , Humoral Hypercalcemia of Malignancy (HHM) and PHPT. FBH is a missense mutation of the calcium-sensing receptor , located on the surface of the parathyroid cells , causing increased PTH secretion. HHM is caused by cancerous tumors producing PTH-related protein (PTHrP). PHPT is often confused with FBH and/or HHM during the early stages of progression because the three pathologies have an identical effect on Ca-related biochemistries. A series of biochemical tests and family history checks are usually necessary to differentiate among these diseases [2]. Previously , we used an engineering control system framework to represent physiological plasma Ca regulation [3]. This framework describes the dynamics of PTH from the PTG , calcitriol from the kidneys , bone cells (osteoblasts and osteoclasts) and plasma calcium. These are mapped onto the controller , the actuators and the process. Following validation of the overall model with published clinical data we successfully simulated Ca-related pathologies through induced defects in the control system components (sensor , controller and/or actuator). In this presentation , we provide a systematic approach for differentiating among FBH , HHM and PHPT based on the unique hormone/ion responses to short-term Ca disturbance in each pathology model. Additionally , based on the changes in intrinsic parameters associated with PTG behavior , we show that the extent of PHPT progression can be reasonably predicted and the enlarged gland size estimated a priori. We hypothesize that the proposed disease diagnosis strategy would be useful for (a) early detection of PHPT in at-risk or asymptomatic patients and , (b) differential diagnosis of FBH , HHM and PHPT where the pathologies have identical presentations and are difficult to distinguish using existing clinical methods. 1. Kovacs , W.J. and S.R. Ojeda , Textbook of Endocrine Physiology. 6th ed2012 , Oxford: Oxford University Press. xii , 462 p. 2. Fraser , W.D. , Hyperparathyroidism. Lancet , 2009. 374(9684): p. 145-58. 3. Christie , C.R. , L.E.K. Achenie , and B.A. Ogunnaike , A Control Engineering Perspective to Modeling Calcium Regulation and Related Pathologies , in Annual Meeting  October 28-    November 2 ,2012.

Preview Presentation:
Presenter(s):
Christopher R. Christie
Once the content has been viewed and you have attested to it, you will be able to download and print a certificate for PDH credits. If you have already viewed this content, please click here to login.