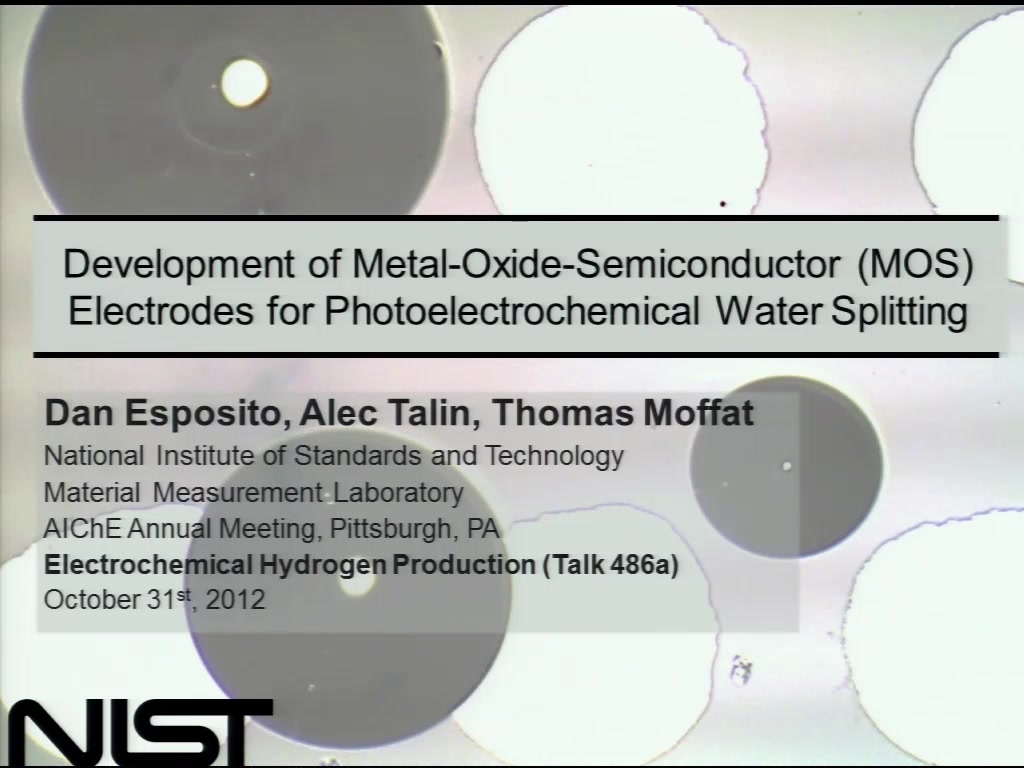 Photoelectrochemical (PEC) water splitting is a promising pathway for renewable H2 production, but there remains a great need for improving the efficiency and stability of semiconducting photoelectrodes. One promising approach to achieving high efficiency and good electrochemical stability is the metal-oxide-semiconductor (MOS) photoelectrode design.[1] This MOS arrangement generally consists of catalytic metal structures, or collectors, deposited on an oxide-covered semiconductor absorber layer. The critical element of this design is the thin oxide layer, which protects the semiconductor from the potentially corrosive electrolyte while mediating minority carrier tunneling between the semiconductor and collectors. The oxide layer must be ultra-thin (1-3 nm) and exhibit minimal defects at the SiO2/Si interface in order to facilitate efficient tunneling and maximize photovoltage. Si is a commonly used photovoltaic material that is also attractive for use in MOS photoelectrodes, but Si-based MOS electrodes demonstrated to date have greatly suffered from poor oxide quality, resulting in interfacial trap states that drastically lower MOS photovoltage and overall water splitting efficiency.[2]

In order to enhance the solar-to-hydrogen conversion efficiencies (ηSTH) of Si-based MOS photoelectrodes, our research efforts have focused on two areas. First, well-defined and ordered metallic structures have been synthesized on high quality SiO2 tunneling layers, grown by rapid thermal annealing (RTA) on p-Si(100). Thermally-grown SiO2 is known to exhibit low interfacial defect densities,[3] meaning that voltage losses incurred by carrier tunneling via the associated mid-gap trap states can be minimized.[2] In this work, we show that the use of thermally grown SiO2 layers for Pt-SiO2-Si photoelectrodes produces a substantial increase in photocurrent onset potential. The well-defined and ordered nature of the metal components in these photoelectrodes provides the additional benefit of being able to optimize the spacing and coverage of collector structures.  By systematically varying these two parameters, we show how optical and kinetic overpotential losses can be balanced to maximize ηSTH values for a given substrate/oxide combination. The second thrust of this work is using in-situ photoelectrochemical measurements with high spatial resolution to aid in optimization of MOS structures and gain a better understanding of charge transfer phenomena in those structures.  This talk will specifically discuss the use of photoelectrochemical microscopy (PECM) for micro-scale mapping of external quantum efficiency and determination of important device parameters such as the minority carrier diffusion length. PECM measurements indicate substantial room for improvement in macro-scale photoelectrode performance and demonstrate the powerful utility of PECM in the design and analysis of MOS photoelectrodes.

Preview Presentation:
Presenter(s):
Daniel V. Esposito
Once the content has been viewed and you have attested to it, you will be able to download and print a certificate for PDH credits. If you have already viewed this content, please click here to login.

Using Catalytic Nanoparticles to Clean Water
Groundwater remediation through the catalytic breakdown of the undesired contaminants is a more effective and desirable approach than the conventional physical...
The Emerging Role of Peptides in Resource Recovery
As critical mined resources become scarcer, society must develop new technologies which enable resource recovery for a sustainable circular economy...