Development of An Integrated CO2 Capture, Transportation and Storage Infrastructure for the UK and North Sea Using An Optimisation Framework | AIChE
Skip to main content

Development of An Integrated CO2 Capture, Transportation and Storage Infrastructure for the UK and North Sea Using An Optimisation Framework 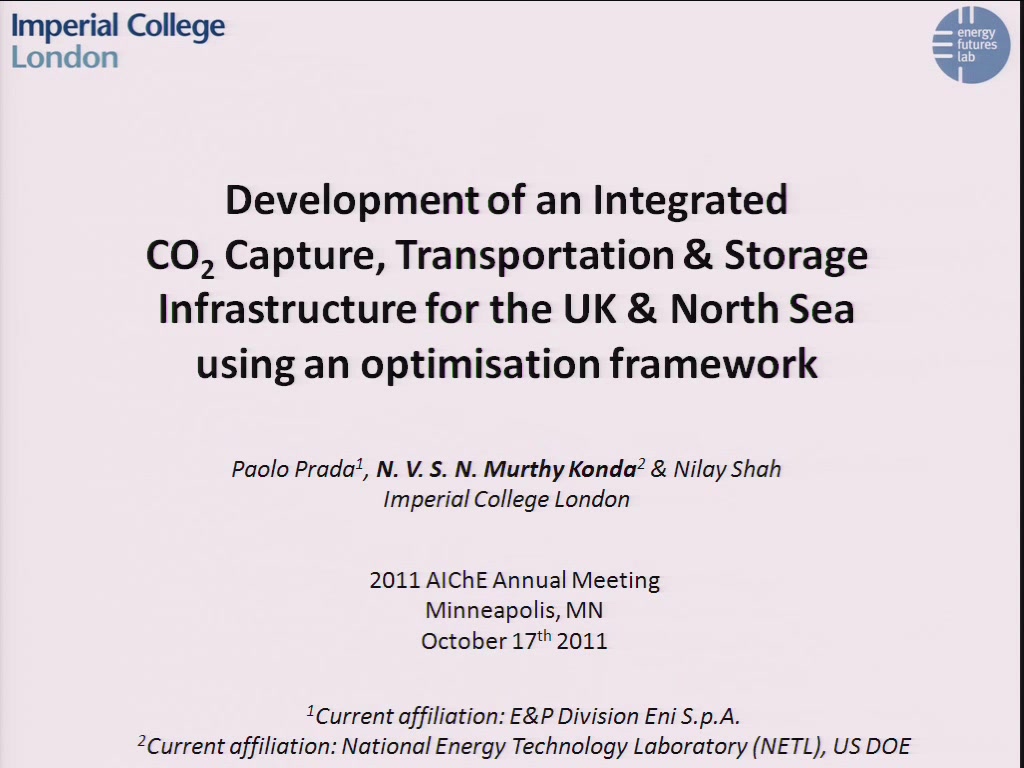 Carbon Capture and Storage (CCS) is widely regarded as an effective medium-term CO2 abatement technology. However, high cost of the capture technologies, at their current state of the art, and the huge upfront costs of the CO2 transport pipelines and storage facilities are hindering the large-scale development and full-chain development at commercial scale. Thus, it is of utmost importance to minimize the associated costs, as much as possible, to facilitate optimal design of CCS networks – this emphasizes the need for rigorous optimization based approach such as the one we employed in this study.

Despite the aforementioned challenges, especially within the context of the UK, given the presence of large number of CO2 emitters and the vicinity of large storage sites in the Southern North Sea, CCS potential for the UK is significant. Thus, it is worthwhile to investigate the economic feasibility of the development of an integrated CCS infrastructure (which may benefit from shared transport and storage components, and economies of scale) together with the possible physical layout and evolution of such a large-scale infrastructure.

In this study, we investigated the optimal deployment of such an infrastructure based on overall cost (including capital and operating costs) minimisation. This is formulated as a Mixed Integer Linear Programming (MILP) problem. The scope of this work includes 33 large UK CO2 emitters and 6 Southern North Sea sinks. Relevant cost estimates and integrated infrastructure layouts are generated through ‘snapshot’ model for several scenarios with varying CO2 reduction targets from 5 to 105 MtCO2/year.

Our results show that, for all the scenarios, practical integrated infrastructures can be developed. An initial ‘seed’ infrastructure is required in the Southern Yorkshire and Humber region and captured CO2 is routed towards Southern North Sea depleted gas fields via the Theddlethorpe terminal. With increasing reduction targets, the infrastructure evolves and incorporates Thames estuary area emitters whose CO2 is separately routed offshore via the Bacton terminal. In the first stage, the CCS system is dominated by coal power stations, primarily Drax, while CCGTs’ contribution becomes significant above 75 MtCO2/year reduction targets. An optimal overall cost of 81.5 $/tCO2,Total is achieved at 30 MtCO2/year after an initial decline primarily due to increasingly shared transport and storage infrastructures. As the reduction target increased beyond 30 Mt/year, more expensive CO2 sources are included in the network – subsequently, the overall cost continually increases up to a maximum of 99.8 $/tCO2,Total when the capture target increased to 105 MtCO2/year.

Sensitivity analysis performed on key parameters – i.e., scaling factors and gas price – revealed that not only the overall costs and but also the timing of retrofit of gas-based power generation are affected. On the other hand, oil refineries, cement works and smaller capacity CCGTs are discarded as cost-optimal emitters to capture in all cases.

The MILP model is thus shown to be an effective framework for the optimal planning and, thereby facilitating, large-scale deployment of CCS infrastructure. (Disclaimer: This work is done while the 1st and 2nd authors were at Imperial College London and the content/opinions/results discussed do not necessarily represent those of the associated institutions).

Preview Presentation:
Presenter(s):
N.V.S.N. Murthy Konda
Once the content has been viewed and you have attested to it, you will be able to download and print a certificate for PDH credits. If you have already viewed this content, please click here to login.

Resin Wafer Electrodeionization for Flue Gas Carbon Dioxide Capture
Energy efficient capture of CO 2 from coal-fired power plants is one of the grand challenges for the U.S. both to end dependence on imported energy and to...
CO2 Leaks From Geological Storage: Geomechanics, Fluid Flow and Phase Transitions
Deep saline aquifers are considered as a promising option for long-term storage of carbon dioxide. However , risk of CO2 leakage from the aquifers through...