Development of Heat Exchangers for Use As Replacement Plates 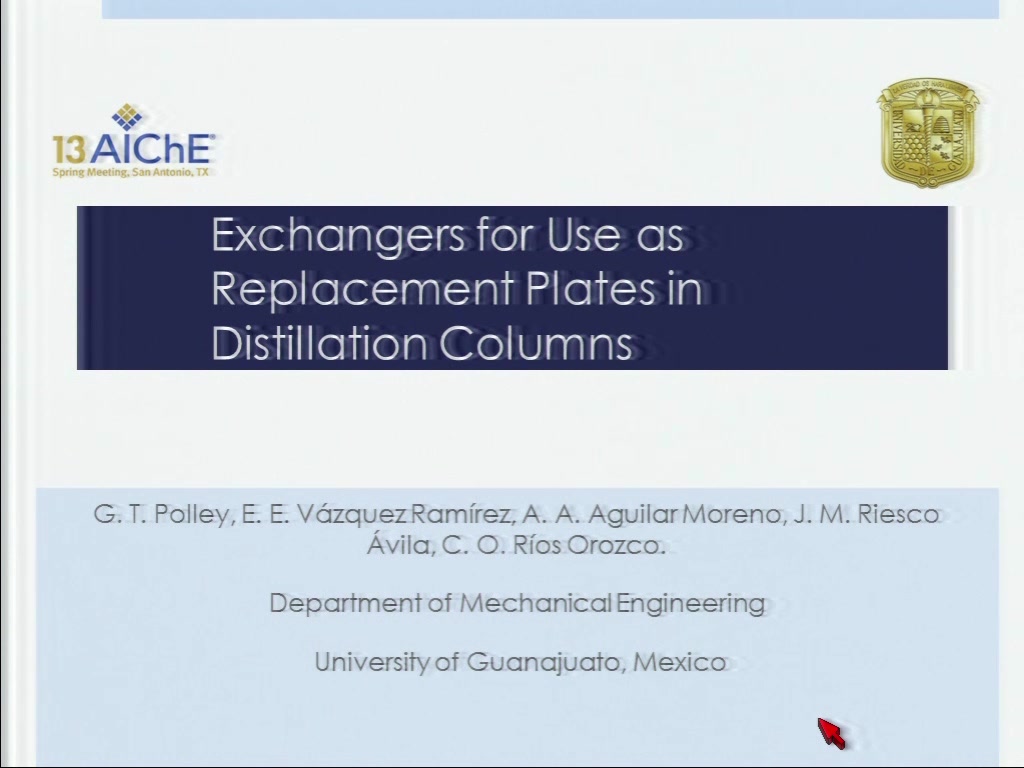 Development of Heat Exchangers for Use as Replacement Plates

In Distillation Columns: Proof of Concept and Collection of Design Information

Separation of chemical species by distillation is an energy intensive process. Whilst it has been recognized for many years that the extraction of heat from intermediate stages within a distillation column can result in significant energy savings the equipment required to do this is generally expensive. For instance, in columns used for the distillation of crude oil small individual columns (side strippers) are often installed alongside the main distillation column.

In more recent years the option of actually undertaking the distillation inside heat exchangers has been examined. However, this usually results in significant reduction in the concentration driving forces used in the separation with significant effect upon column size and cost.

Work being undertaken at FIMEE is directed at the examination of an inexpensive form of heat exchanger (fabricated from parts manufactured for use in the motor industry) that can be installed as a replacement for a plate within an existing distillation column.

A distillation column consisting of a number of sieve plates is illustrated in Figure 1. A sieve plate is simply a flat plate through which a number of small diameter holes have been drilled. The vapor traveling upward through the column has sufficient velocity to prevent liquid flowing through these holes. As a consequence, a two phase mixture is produced on top of the plate. It is maintained on the plate by a weir. Whilst the vapor velocity is sufficient to prevent liquid flowing through the holes it is not high enough to carry liquid to upward through the column. Consequently, liquid and vapor separate above the reservoir formed by the weir with the liquid flowing down the plate down-comer that feeds the next plate down the column.

The new exchanger fits in the space of two existing plates. The upper outlet then acts as a sieve plate. The liquid over flows the weir and feeds the next plate down the column.

The proposed design has two significant features. The first is a liquid feeder plate that distributes the liquid from the feed down-comer across the heat exchanger. This is illustrated in Figure 2.

This base of this plate is sealed. The upper plate is perforated.

The second feature is the ?flow inducer? and is illustrated in Figure 3.

Vapor flowing from the sieve plate below the exchanger passes through tubes installed in the base of the liquid feed plate. These tubes protrude into the individual heat exchanger tubes. Liquid from the feed down-comer is then entrained by this vapor flow and drawn through the heat exchanger.

The apparatus used in this study only considers hydraulic performance of the heat exchanger. It consist consists of a single transparent tube (in order that flow patterns can be observed using high speed photography) that represents a tube within the heat exchanger that is fitted with flow inducer (as described above - Figure 3).

The rig (both schematic and photograph) is shown in Figure 4.

This tube sits inside a large diameter tube that provides a reservoir of liquid. The reservoir has gauge marks that are used to measure the height of liquid above the flow inducer.

Liquid is fed to the feed reservoir from tank A. The flow being controlled by a valve positioned in the feed leg.

Air is injected into the tube at a controlled and measured rate (measured using rotameters).

The two-phase mixture leaving the exchanger tube is separated in a tank (tank C), with liquid flowing to a collection vessel (tank D). This vessel is used to measure the rate of flow of liquid through the exchanger tube (through measuring the time to collect a given quantity of liquid). On completion of the measurement this liquid is emptied into tank B. Tanks A and B operate on a constant recycle in order to minimize pressure variation in the feed leg and provide good flow control (confirmed by differential height calculations during collection in tank D).

Data obtained in the experiments are given in Table 1.

A ?homogeneous? model is found to provide good correlation of the measurements for conditions in which frictional lossses dominate. Accuracy of prediction falls as the % of overall pressure drop due to kinetic effects increases. This suggest that assumption that the incoming liquid has zero kinetic energy is incorrect.

Further experimentation is necessary to determine the significance of kinetic energy effects within the wter injection system.

Heat transfer within the tubes of the exchanger will be controlled by the balance of two mechanisms: two-phase convective heat transfer and nucleate boiling heat transfer.

The convective heat transfer coefficient is given by:

The predictions of this equation have been compared with a large data base of measured heat transfer coefficients during upward flow boiling within circular tubes. The data are well correlated.

The principle problem that has been identified is that under many circumstances the liquid Reynolds Number falls in the laminar flow region. But this leads to the identification of two potential improvements in the exchanger design. These are the provision of a liquid recycle and the use of tube inserts to promote heat transfer within the exchanger.

The mass flux of liquid flowing through the exchanger can be set independently by adjusting the positioning of recycle vanes installed in the liquid down-comer.

So, it is possible (using a quite simple spreadsheet) to determine the heat transfer coefficient achieved in the heat exchanger for different combinations of vapor and liquid mass fluxes. The homogeneous pressure drop model will then allow calculation of minimum tube length for the heat exchanger.

Knowing the overall heat transfer coefficient for the heat exchanger the heat load obtained for a given temperature difference between the column and the fluid with which it is integrated.

The concept of an integrated internal heat exchanger that takes position previously occupied by distillation plates has been demonstrated using a simple apparatus.

It has been found that the hydraulic behavior of such an exchanger is well modeled by a homogeneous flow model.

There is significant scope to improve the heat transfer performance of such exchangers by installing tube inserts.

The flexibility of such exchangers can be improved by installing vanes in the liquid down-comers in order to provide liquid recycle and increased liquid flow through the exchanger.

A procedure that allows the engineer to link column duty, heat exchanger design and process integration opportunity has been developed.

Preview Presentation:
Presenter(s):
G. T. Polley
Enrique Vasquez Ramirez
Once the content has been viewed and you have attested to it, you will be able to download and print a certificate for PDH credits. If you have already viewed this content, please click here to login.