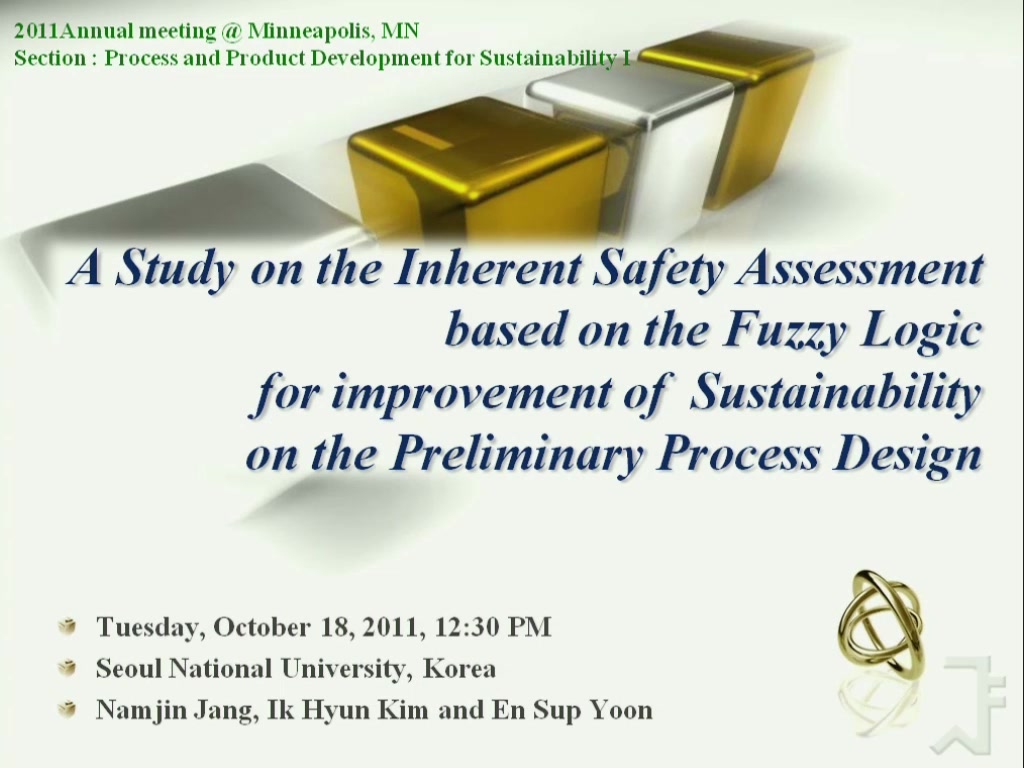 A milestone in process safety was the 1974 Flixborough explosion in the United Kingdom the caused twenty-eight deaths. Following, the accident interest in chemical process industry safety increasd, as well as from government regulatory organizations and the general public. Since 1978, interest in inherent safer chemical processes and plants has grown, and that growth was particularly rapid in the 1990s [1]. Several studies has proposed tools for evaluation and estimation of chemical process and plants such as Dow Fire & Explosion Index and the Dow Chemical Explosure Index [2]. Also, Bollinger et al. (1996), Gupta and Edwards (2002), Khan and Amyotte (2003) developed methods for inherent safer design. Most of indices adopted relative scoring method to measuring inherent safety design. The major two indices are Prototype Inherent Safety Index (PISI) by Lawrence in 1996 [3] and Inherent Safety Index (ISI) by Heikkila in 1999 [4]. Actually, ISI is focused on process units and structure in basic design step. Especially, it is incorporated into process synthesis using computer aided process design tool. Also, several attempts are reported incorporation into process life cycle; chemical product design (research), basic process design, detail process design and construction, operation and management and decommissioning. However, there have some considerations to improve applicability of inherent safety design index. One of the considerations is effect of mixture which is flash point, lower and upper explosive limits and threshold limit value (TLVs). Additional, the dependence of temperature and pressure of process are considered. The second of consideration is the lack of model and knowledge of process, so, in this paper, we will suggest fuzzy logic based model to express uncertainties.

The evaluation was done by using the six process routes for manufacturing methyl methacrylate (MMA) as a case study. To validate our proposed method, the experts ranking and several existed index are compared.

The proposed methods can be guideline to decision makers of chemical process design when the safety and economic have conflicts because of government aspects and for practical engineering reasons. It can make easy to affect the process configuration and inherent safety in the conceptual design phase than in the later phase of process design.

Preview Presentation:
Presenter(s):
Namjin Jang
Once the content has been viewed and you have attested to it, you will be able to download and print a certificate for PDH credits. If you have already viewed this content, please click here to login.

Plant-Wide Hybrid Model Predictive Control of a Continuous Pharmaceutical Tablet Manufacturing Process Via Direct Compaction
QbD and PAT requires the next generation of pharmaceutical products be manufactured through continuous processing integrated with online monitoring tools...
Dividing Wall Column - Design for a Retrofit
A market opportunity arose for a higher value market for an existing product line if key impurities could be reduced an order of magnitude below standard...