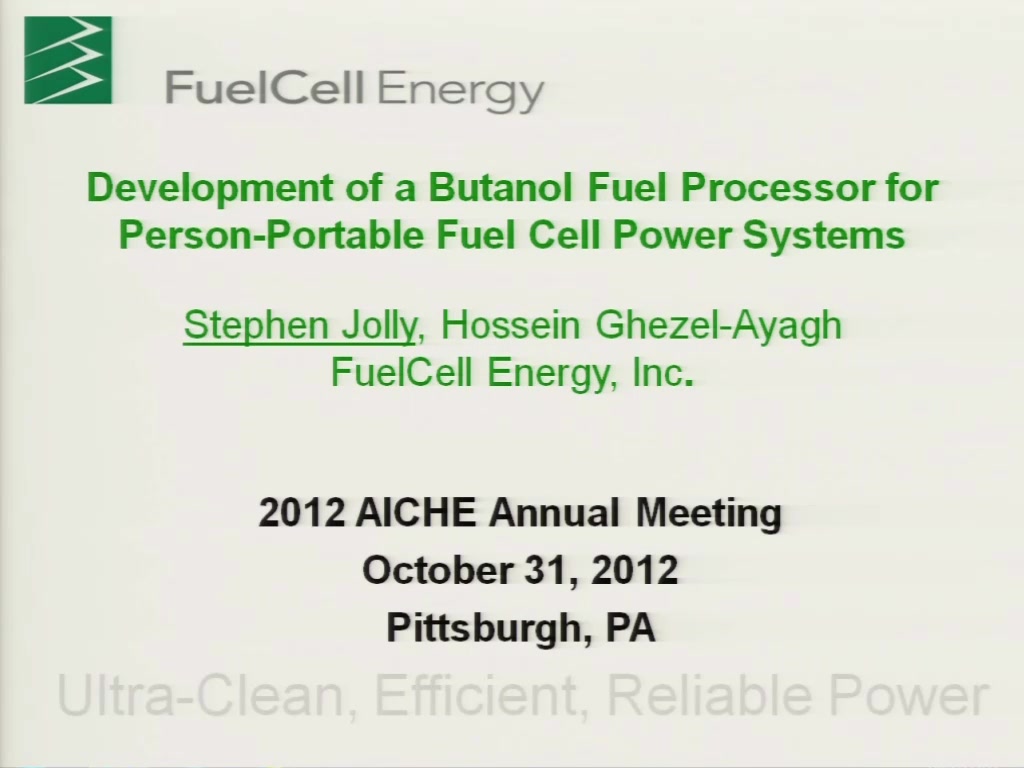 A novel partial oxidation (POX) catalyst and butanol-to-hydrogen fuel processor sub-system concept have been developed to fill the need for person-portable power systems with high energy density for extended duration operation.  The system is designed to reform isobutanol through partial oxidation with air.  A multi-stage carbon monoxide removal train was developed to convert the CO present in the reformate stream.  The resulting hydrogen stream is suitable for integration with a PEM fuel cell for person-portable power system applications.

An integrated system design approach was undertaken to optimize the fuel processing system configuration and operating conditions.  Among the available fuel processing options, systems based on both partial oxidation and auto-thermal reforming (ATR) of isobutanol fuel were investigated.  The former, i.e. partial oxidation reforming, results in a simpler but less efficient design to implement.  The latter, i.e. autothermal reforming, is a more efficient approach for conversion of isobutanol to hydrogen for the fuel cell anode.  A systematic design study has determined the optimal operating conditions for the partial oxidation and autothermal-based systems.

The concept feasibility of reforming isobutanol to a hydrogen-rich stream via partial oxidation was experimentally demonstrated.   Novel catalyst formulations and catalyst support structures have been developed and tested.  A Rh/Ce-based reforming catalyst effectively converted isobutanol to an H2-rich stream with no coke formation under the desired system operating conditions.  The catalyst was also demonstrated to be regenerable, should carbon deposition occur.  In summary, the concept feasibility of both a novel butanol reforming catalyst and fuel processor sub-system design to effectively convert isobutanol to hydrogen with the potential to be packaged into a compact, high energy density system has been demonstrated.

Preview Presentation:
Presenter(s):
Stephen Jolly
Once the content has been viewed and you have attested to it, you will be able to download and print a certificate for PDH credits. If you have already viewed this content, please click here to login.

Aqueous-Phase Fischer-Tropsch Synthesis by Using Ruthenium Nanoparticle Catalyst
Fischer-Tropsch synthesis has long been known as an alternative process to produce long-chain hydrocarbons for their use in transportation fuels. In the...
Value Additiion by Integrating C3 Derivatives with PDH Units
With rapid development of Ethane based Ethylene production in Middle East and switch to lighter feedstock in US crackers have been mainly responsible for...