Design of a Colloidal Network for Antimicrobial Peptide Protection and Delivery 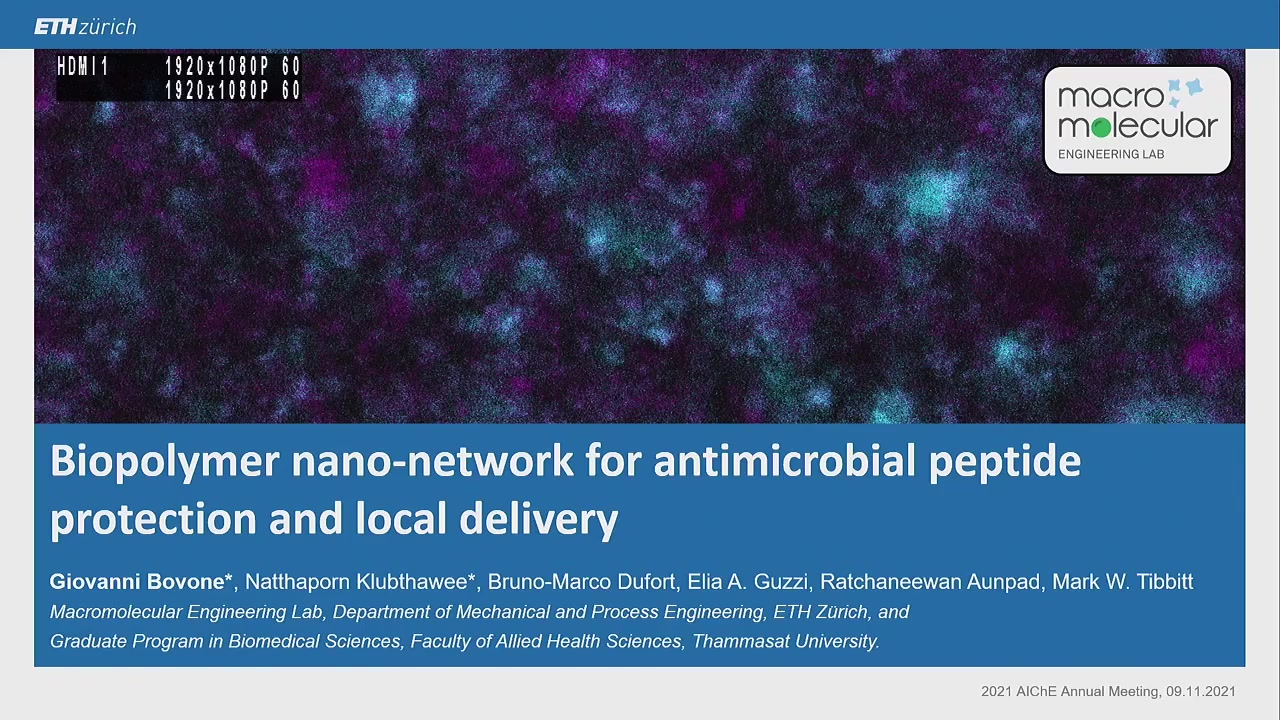 Antimicrobial resistance (AMR) develops when bacteria, such as Pseudomonas aeruginosa, stop responding to normal antimicrobial treatment to which they were originally sensitive.1 There are limited successful treatments to cure infections caused by AMR microbes increasing the risk of AMR microbe spread, prolonging hospital stays, and adding economic and social costs. Antimicrobial peptides (AMPs) offer advantages over conventional therapies, including a lower propensity of resistance development, antibiofilm activity, and host immune response modulation.2 However, AMPs are sensitive molecules and can be degraded or inactivated by proteolytic enzymes present in living organisms.3 Peptide cyclization and d-isomerization enhance peptide stability by making them less prone to enzymatic degradation; however, these methods require a chemical alteration of AMPs.4 Further, these modifications can decrease peptide activity against pathogens, or even completely deactivate it.5, 6 Therefore, drug delivery strategies that can protect AMPs and release them at the site of infection present a complementary approach to treat AMR microbes.


Here, we present an injectable and biodegradable colloidal nano-network (NN) to protect AMPs against enzymatic degradation. Positively (pNPs; ~400 nm) and negatively charged nanoparticles (nNPs; ~300 nm) were formed via complex coacervation of chitosan and dextran sulfate. The charged AMP PA-13 was encapsulated into the NPs by electrostatic complexation without the requirement of peptide chemical modifications.7 A colloidal NN was formed by simple mixing of pNPs with nNPs and rheological analysis demonstrated that the NN could flow through narrow gauge needles (shear-thin) while retaining its shape after being extruded (self-heal). This rheology enables application of the AMP-loaded NN as a cream or injectable gel. After exposure to peptidases the formed NN loaded with PA-13 eliminated most of Pseudomonas aeruginosa (Î”5 log CFU/mL) while the unprotected PA-13 had no effect (Î”0 log CFU/mL), demonstrating the ability of the NN to protect AMPs.

Overall, our study demonstrates that the designed NN is a potential platform for AMP protection against enzymatic degradation without negatively affecting peptide activity. Given the simplicity of the AMP inclusion into the NN, we envision that this platform could encapsulate a variety of charged peptides through electrostatic complexation.

Preview Presentation:
Presenter(s):
Ratchaneewan Aunpad
Giovanni Bovone
Natthaporn Klubthawee
Mark Tibbitt
Once the content has been viewed and you have attested to it, you will be able to download and print a certificate for PDH credits. If you have already viewed this content, please click here to login.

Optimizing and Controlling High Value Processes Using the Principles of Quality-by-Design (QbD) Advanced Tools Such as Real-Time in-Situ Particle Characterization, in-Situ Mid-Infrared Spectrometry, and Reaction Calorimetry
Quality by Design (QbD) is a concept applied to gain true process understanding utilizing tools such as Design of Experiment (DoE), Risk Management, and...
Microengineered Hydrogels for Stem Cell Bioengineering and Tissue Regeneration
Micro- and nanoscale technologies are emerging as powerful tools for controlling the interaction between cells and their surroundings for biological studies,...