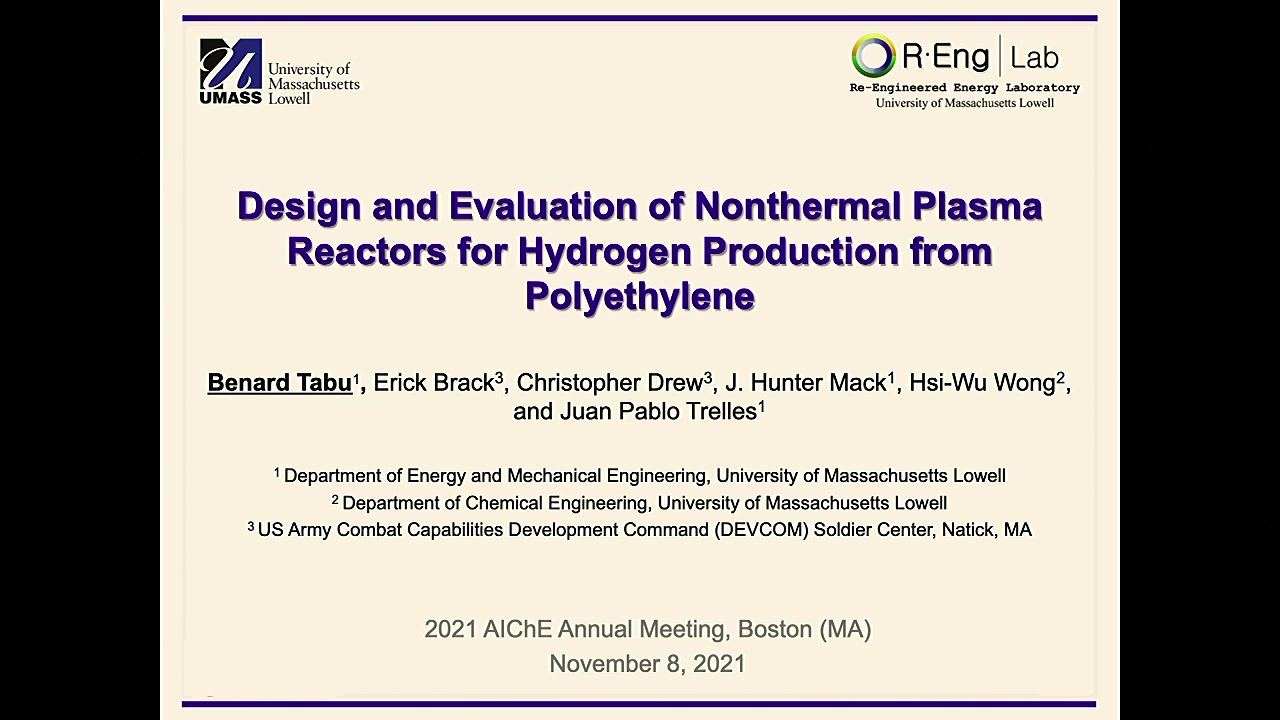 Hydrogen is a clean fuel that can also be utilized for in-situ production of water (in combination with atmospheric oxygen). Water and hydrogen-rich low-molecular weight substances, such as methane and ammonia, have traditionally been used as hydrogen sources or hydrogen-storage media. Solids such as plastics, biomass, and solid wastes constitute alternative, abundant, and under-utilized hydrogen sources. Hydrogen production from solids have largely relied on thermochemical approaches, generally operating at relatively high temperatures (e.g., 200 to 700 oC for pyrolysis, 400 to 1500 oC for gasification) and/or pressures (1 to 10s atm). Approaches based on nonthermal plasma (i.e. partially ionized gases in which free electrons have significantly greater equivalent temperatures than gas species, i.e. on the order of 1 eV ~11600 K and a few hundred oC, respectively) have the potential to be more energy efficient and selective compared to established thermochemical approaches, especially when operated at low temperature (e.g., < 200 oC) and atmospheric pressure conditions. Moreover, the direct use of electricity to generate chemical reactivity in plasma-based hydrogen production approaches prompts them to be especially environmentally benign when powered by renewable energy sources, such as solar photovoltaic and wind power. Two plasma reactors, one based on a transfer arc (transarc) discharge and the other based on a gliding arc (glidarc) discharge, have been designed, fabricated, and experimentally evaluated for the production of hydrogen from low-density polyethylene (LDPE). The transarc reactor is based on a pin-to-plate electrodes configuration leading to the transfer of electric current through the solid feedstock. The transarc allows direct control of power delivered to the feedstock and requires minimal auxiliary gas flow. The glidarc is based on a three equi-spaced diverging electrodes configuration, leading to the generation of a tri-prong arc that is electrically detached from the feedstock. The arc forms at the location of minimum electrodes separation and then glides along the electrodes due to the combined effects of advection by the inflow gas and buoyancy of the low-density plasma, to finally impinge on the solid feedstock. The glidarc allows the processing of arbitrary and heterogeneous feedstock streams, but its operation is sensitive to the inflow gas rate. Both reactors were used for the treatment of solid LDPE feedstock samples in batch mode under atmospheric temperature and pressure conditions. The experiments included time-dependent measurements of power consumed by the plasma, hydrogen production rate, hydrogen production selectivity, and hydrogen production efficiency as function of driving voltage and flow rate. The results show that hydrogen production rate increases with increasing power levels and decreasing flow rates for the glidarc; whereas for the transarc, the hydrogen production rate significantly depends on power level, indistinctively of the flow rate. The results indicate that nonthermal atmospheric plasma approaches are effective for the production of hydrogen from polyethene at mild temperature and pressure conditions.

This work has been supported by the US Army Combat Capabilities Development Command (DEVCOM) through contract # W911QY-20-2-0005.

Preview Presentation:
Presenter(s):
Kevin Akers
Mammadbaghir Baghirzade
Eric Brack
Christopher Drew
J. Hunter Mack
Benard Tabu
Juan Trelles
Hsi-Wu Wong
Peng Yu
Once the content has been viewed and you have attested to it, you will be able to download and print a certificate for PDH credits. If you have already viewed this content, please click here to login.