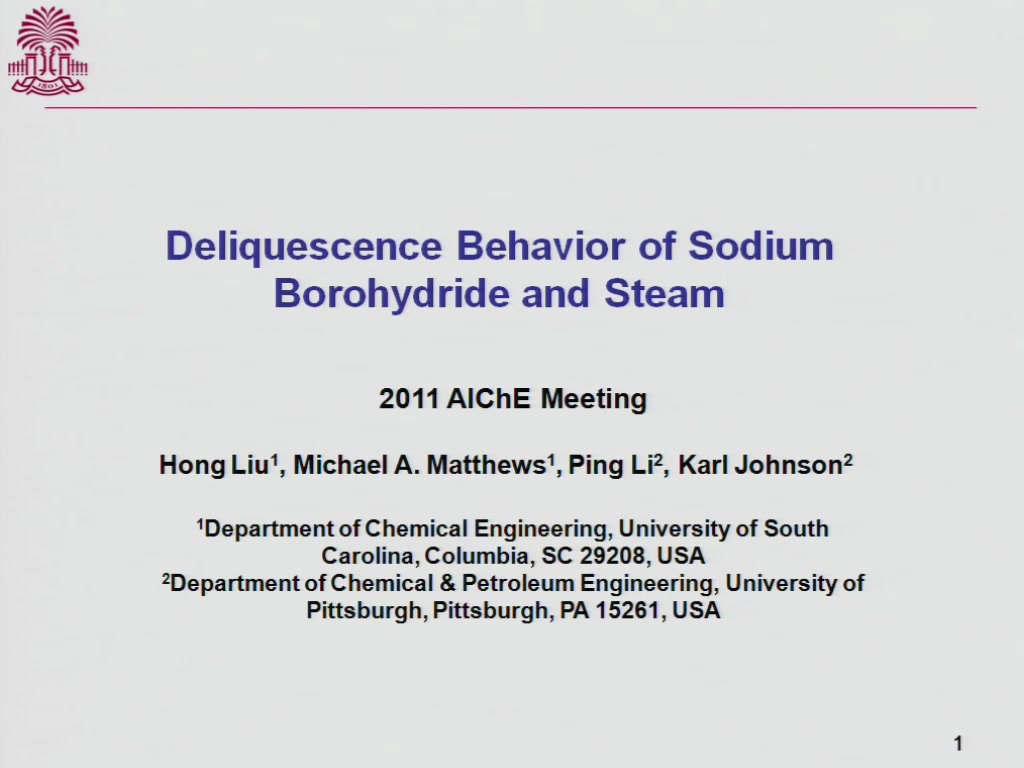 Sodium borohydride as an effective, cheap and stable material for hydrogen storage has been studied widely. Despite prior studies [1-5] on the steam hydrolysis of NaBH4, the mechanism for the release of hydrogen by water vapor/ NaBH4 contact has not been well understood. Recently, Beaird et al. [2] established that the initial step in the pathway is deliquescence of water onto NaBH4, and she reported the deliquescence relative humidity (DRH) based on visual observation of the change in appearance of NaBH4 crystals during reaction. A basic study of the phase behavior during the water vapor hydrolysis reaction is necessary should the reaction pathway be exploited in for future engineering designs. Therefore, in this presentation we build on prior DRH measurements by developing a theoretical model and utilizing this, with experiments and simulation, to accurately predict the deliquescence behavior of steam on sodium borohydride. Macroscopically, we describe deliquescence in the bulk limit where the theory is well established. Microscopically, we have also used first principles density functional theory to examine the initial stages of deliquescence at the atomic level. We have performed ab initio molecular dynamics at 300 K and 350 K using a slab model of the NaBH4(001) surface covered by water. The simulations indicate that the initial stages of deliquescence happen very rapidly, with water penetrating the (001) surface on the picosecond time-scale. Deliquescence is known to initiate clearly with increasing relative humidity on reaching free energy equality between the initial (salt particle plus vapor) and final (fully dissolved solution drop plus vapor) states until deliquescence. Additional experiments utilize in situ visualization, as described by Beaird et al. [2].

Preview Presentation:
Presenter(s):
Hong Liu
Once the content has been viewed and you have attested to it, you will be able to download and print a certificate for PDH credits. If you have already viewed this content, please click here to login.

Hydrogen Production by Reforming of Logistic Diesel Fuel in Supercritical Water
Compared with other fuels, diesel fuels still have significant advantages in terms of logistic properties such as energy density, availability and ease of...
Forward Osmosis: Potential Use In Desalination and Water Reuse
Abstract There has been a recurring interest in using Forward Osmosis (FO) process in water treatment and desalination. The recent advance in membrane...