CSB Investigation Reports and the Hierarchy of Controls: Round 2 | AIChE
Skip to main content

CSB Investigation Reports and the Hierarchy of Controls: Round 2 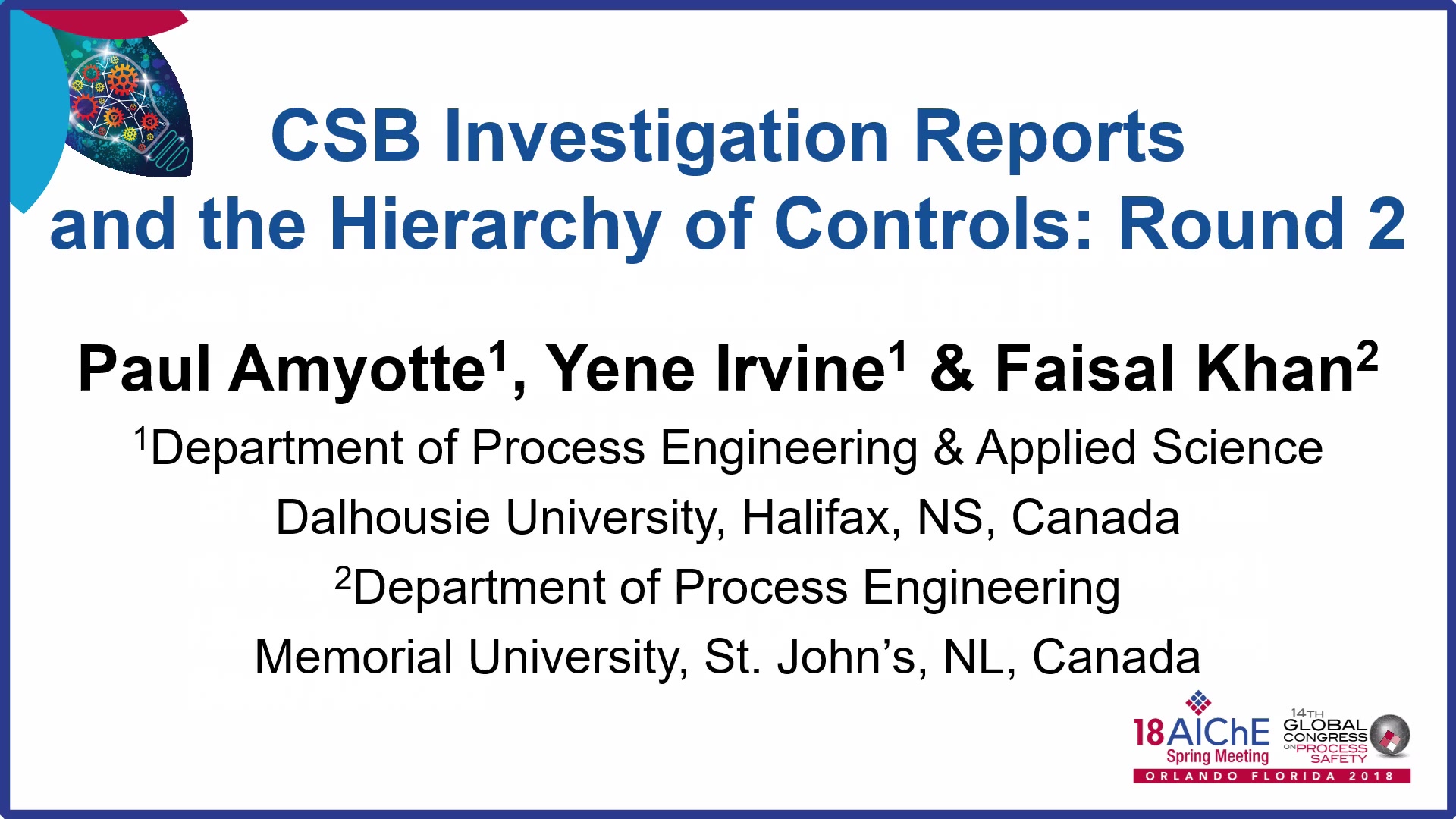 Twenty-five reports resulting from incident investigations conducted by the U.S. Chemical Safety Board (CSB) over the period December 2009 â€“ May 2016 have been analyzed for evidence of examples related to inherent safety (minimization, substitution, moderation and simplification), passive and active engineered safety, and procedural safety. These risk reduction measures, which collectively form the hierarchy of safety controls, were also analyzed for their contribution to both incident prevention and consequence mitigation, as well as their applicability to specific elements of the process safety management (PSM) system recommended by the Canadian Society for Chemical Engineering (CSChE).

This work represents the continuation of a previous study presented in 2011 at the 13th Process Plant Safety Symposium, which performed a similar analysis for 60 CSB investigation reports written during the period 1998 â€“ 2010. The update provided here further illustrates the significant value of CSB investigation reports in demonstrating lessons learned and in training and educational efforts.

Key among the current findings are the following points:

The presentation and paper will include a discussion of the rationale and motivation for undertaking the current work. Specific examples will be given which clearly illustrate the interplay among the inherent, passive engineered, active engineered and procedural safety levels in the hierarchy of controls. The relationship of the hierarchy levels to the risk reduction concepts of prevention and mitigation, as well as to the systematic management of process safety, will be illustrated using an example-based approach. Finally, a quantitative analysis will be provided for the initial (2011), current and overall results in terms of percentage breakdowns by inherent safety principle, hierarchy of controls level, risk component (prevention or mitigation), and PSM element. Throughout the presentation and paper, emphasis will be placed on the process safety lessons afforded by the U.S. Chemical Safety Board investigation reports. These lessons will provide guidance on inherent safety application at both the design stage (e.g., limitation of effects by means of facility siting) and operational stage (e.g., moderation by use of appropriate storage bins for hazardous materials).

Preview Presentation:
Presenter(s):
Paul R. Amyotte
Once the content has been viewed and you have attested to it, you will be able to download and print a certificate for PDH credits. If you have already viewed this content, please click here to login.

Enhancements in Depressuring/Blowdown Modeling and Why It Matters in Facility Design
Blowdown or depressuring modeling is a critical activity in the design of high pressure vessels. Under emergency conditions, as the vessel is emptied, the...
Study on On-Line Monitoring Technology of Oil Tank Grounding
Abstract: after completion of tank construction, the change of grounding system will be out of peopleâs sight. The soil resistance will be...