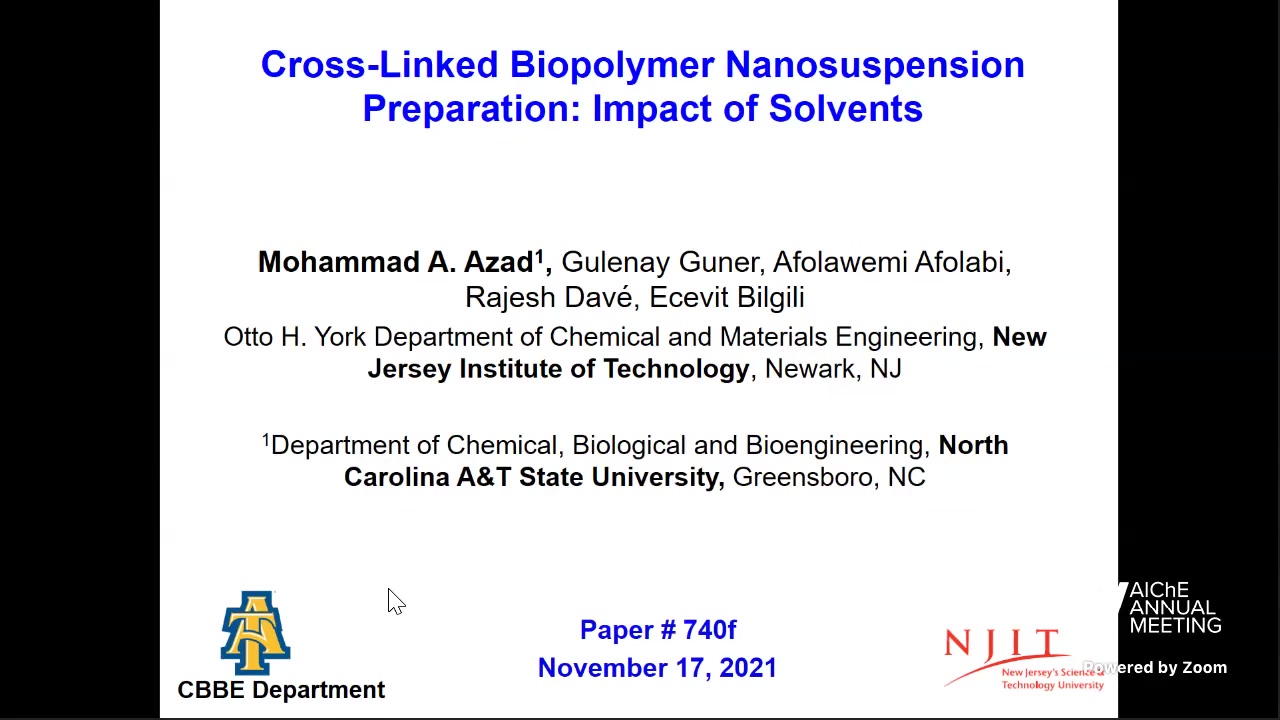 The impact of two solvents (water vs. acetone) in the preparation of cross-linked biopolymer nanosuspensions in WSMM was investigated. Sodium starch glycolate (SSG), a model cross-linked biopolymer, was selected owing to its popularity in the pharmaceutical industry [8]. SSG was milled in water (M1) and aqueous solutions of hydroxypropyl cellulose (HPC) and sodium dodecyl sulfate (SDS) as stabilizers (M2) as well as in acetone, with (M3) and without (M4) the same set of stabilizers. The use of HPCâ€“SDS in M2 and M4 is expected to help prevent aggregation, depending on the liquid medium. The milling dynamics were investigated by studying the evolution of the particle size distribution (PSD) during milling via laser diffraction. It is hypothesized that the solvent affects particle breakageâ€“aggregation, swelling, and microhydrodynamics in the mill and, in turn, PSD evolution. The impact of the solvents on the SSG swelling, suspension viscosity, and the microhydrodynamic parameters was examined. Detailed analysis of milling dynamics, swelling data, and SEM images are presented for the purpose of developing a better understanding of the roles played by the solvents.

The model cross-linked biopolymer, SSG, was milled for 4 h in DI water (swelling solvent) and acetone (non-swelling solvent) with and without stabilizers. A combination of HPCâ€“SDS was used as a stabilizer system. Particle sizes of SSG particles in various states, i.e., as a dry-sieved powder (measured by Rodos/Hellos system), swollen in water (measured by Coulter LS 13 320), dispersed in acetone, and after 4 h milling in acetone and water is shown in Fig. 1a. Whereas the SSG particles in the water had a larger median size (114 mm) than the dry SSG particles (32 mm), there was no discernible size difference between the dry SSG particles and those dispersed in acetone. This observation can be explained by the fact that SSG does not swell in acetone, but it does so in water; SSG has a hydration capacity of 18.3 g water/g SSG [13], and we estimate that about 38% of water was absorbed by SSG. A cursory look at the particle size statistics in Fig. 1a pointed to a distinct size difference when SSG was milled in water vs. acetone for 4 h, signifying the significant impact of the solvents. Both 50% and 90% passing sizes of the cumulative PSD (d50 and d90, respectively) of the swollen SSG particles were drastically reduced to the colloidal domain, with a slight positive effect of the stabilizers (M2 vs. M1). These suspensions are referred to as nanosuspensions in prevalent pharmaceutical terminology, although the median size was slightly above 100 nm. On the other hand, the dry (unswollen) SSG particles in acetone did not exhibit such a drastic extent of size reduction; coarse micron-sized suspensions with a wide PSD were formed. A comparison of M1 and M3 suspensions in Fig. 1b shows that no settling occurred with the nanoparticles in the well-dispersed M1 suspension after 3-day storage, whereas settling occurred in the coarse M3 suspension with micron-sized particles. A particle size difference, i.e., d50: 4.2 vs. 2.7 mm between M3 and M4 suspensions indicates that stabilizers reduced the extent of particle aggregation in acetone.

In a short-term physical stability test, the PSD of milled suspensions after 3 days of storage indicates insignificant particle growth or aggregation in the aqueous suspensions; these suspensions were physically stable. On the other hand, the non-aqueous (acetone) suspensions had larger particles upon storage for 3 days, signifying continued aggregation during the storage. The stabilizers helped to slow down SSG aggregation in acetone, but they were unable to suppress the aggregation completely. The results suggest that SSG particles swelled in water and underwent extensive breakage into nanoparticles, and these fine particles did not aggregate even in the absence of HPCâ€“SDS. The presence of HPCâ€“SDS reduced the extent of aggregation and SSG particle size in acetone. The presence of larger primary SSG particles in the SEM images (not shown for brevity) of 4 h milled water vs. acetone suspension samples qualitatively suggests that both the rate and extent of particle breakage were higher in water than in acetone. Our microhydrodynamic analysis of the milling data suggests that while swelling-induced coarsening enhanced SSG particle capture probability and achieved faster breakage initially, acetone was generally more favorable for faster breakage of < ~10 Âµm particles than water. Despite this slight advantage of acetone, water was overall more favorable for faster production of stable nanosuspensions than acetone due to swelling-induced coarsening and softening of SSG particles as well as favorable nanoparticle stabilization in water.

We have demonstrated a significant influence of the solvents on the PSD evolution of cross-linked biopolymeric particles during WSMM through their modulation of the complex interplay between breakageâ€“aggregationâ€“stabilization, microhydrodynamicsâ€“rheology, and swelling. In a future study, the swelling-induced softening of SSG particles and adsorption of HPC on SSG particles in acetone should be studied to gain a deeper fundamental understanding. Moreover, a formulation optimization study may be performed to identify the optimal concentration of HPCâ€“SDS to suppress SSG particle aggregation in acetone completely or find alternate molecular weight/type of soluble polymers to achieve the same. 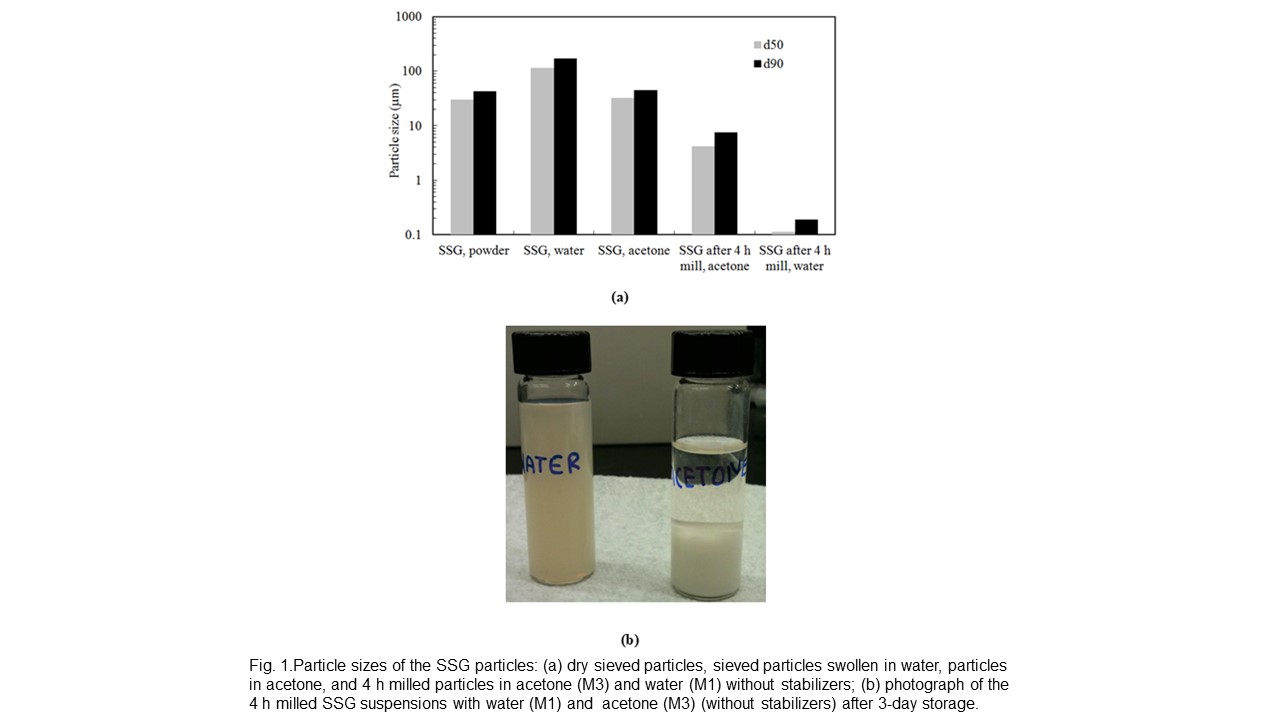 Preview Presentation:
Presenter(s):
Afolawemi Afolabi
Mohammad Azad
Ecevit Bilgili
Rajesh Dave
Gulenay Guner
Once the content has been viewed and you have attested to it, you will be able to download and print a certificate for PDH credits. If you have already viewed this content, please click here to login.

Formulation Design Evaluation for a Single Layer Osmotic Capsule
A single layer osmotic capsule for controlled-release has been examined to provide an easy to manufacture capsule analog to single layer osmotic tablet...
Critical Analysis of the Foundation for Various Physical Models Used in Fluid-Particle CFD
Computational fluid dynamics (CFD) has the potential to become a promising predictive toolbox for industrial operations. Most industrial operations involve...