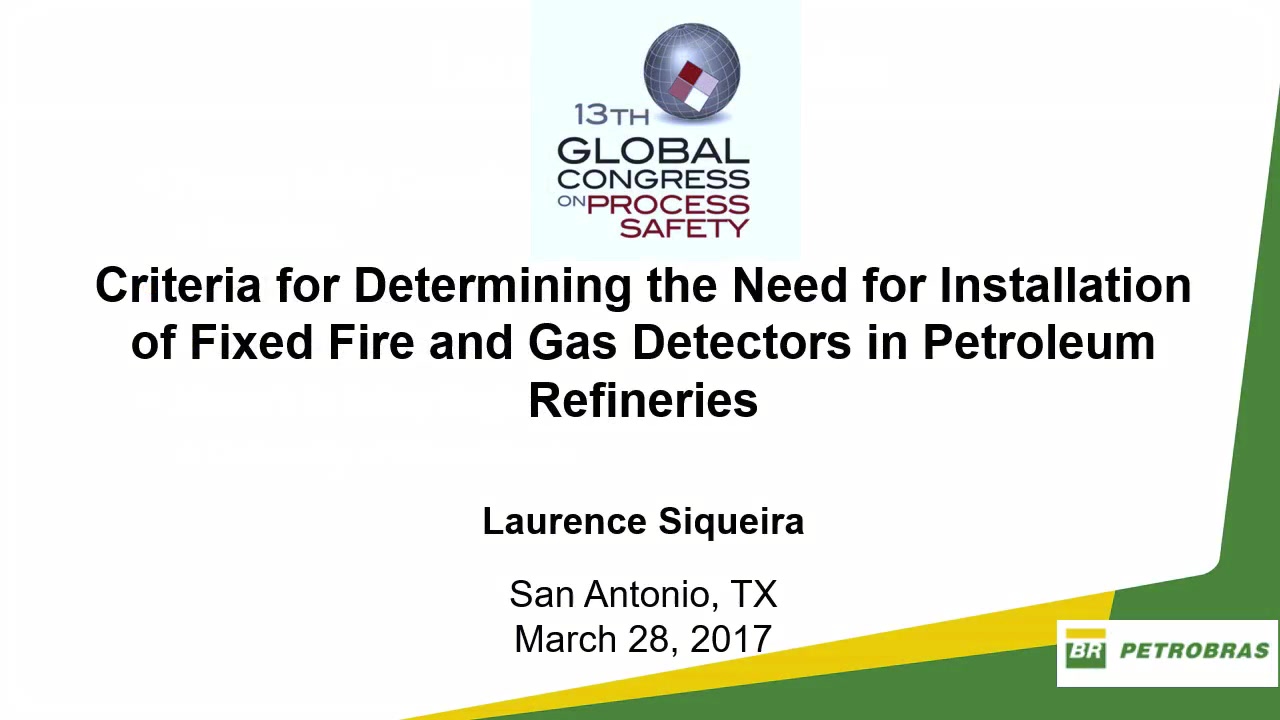 One of the most important aspects of management of industrial risks focusing in process safety is the selection of accidental scenarios for which the installation of fire and gas detection systems is necessary. This is due to the costs involved and the effectiveness of their implementation, that depends on their location and their probability of detection. Thus, in order to standardize this process for its refineries, PETROBRAS has established a technical guideline that considers the potential for ignition of gas leaks and flammable liquids from the equipment failure rate and a maximum tolerable frequency in determining the need for usage of fire and gas detectors.

The probability of a flammable mass release due to leakage takes into account the operating conditions of the process plant such as pressure, temperature and physical state of the most significant flammable substance after the leakage. The physico-chemical data of the substance are also considered, such as molecular weight, auto ignition temperature, LEL (Lower Explosion Limit), MIE (Minimum Ignition Energy), Flash Point and Boling Point.

It was also defined a criteria based on risk analysis for which accidental scenarios leakages should be considered eligible for the fire and gas detection. After the selection of the elected critical scenarios, it was established another criteria based on leaked volumes and equipment failure rate, the later obtained from database available in the oil and gas industry. With the ignition probability of the leakage and the failure rate of the considered systems, it was possible to determine the probable frequency of its occurrence. For those scenarios with results above the tolerable frequency, it was considered that they were eligible for installation of fire and gas detectors.

The technical guideline has been applied in more than 200 process units of PETROBRAS refineries and has allowed not only to reevaluate the need of installation of fire and gas systems, but also to increase its effectiveness, resulting in a reduction of consequence severity from leakage of flammable mass. Additionally it has contributed to the optimization of installation and reduction of the maintenance costs of the plants.

Preview Presentation:
Presenter(s):
Laurence Siqueira
Once the content has been viewed and you have attested to it, you will be able to download and print a certificate for PDH credits. If you have already viewed this content, please click here to login.

Understanding IPL Boundaries
Layer of protection analysis (LOPA) is a simplified risk assessment tool that has been in use for almost three decades. The technique has improved the focus on...
Hydrogen System Maintenance and Inspection
This course describes best practices for planning, performing and documenting inspection and maintenance of hydrogen systems Center for Hydrogen Safety This...