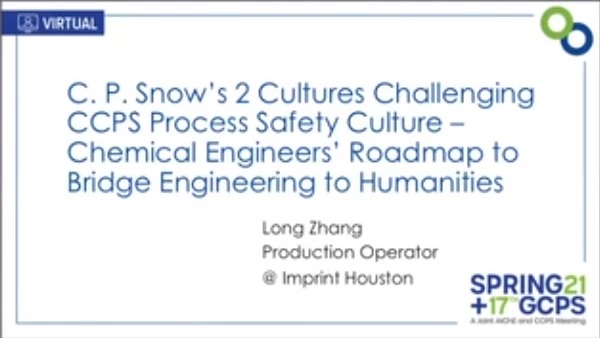 In 1959, C.P. Snow raised a â€œtwo culturesâ€ challenge - a persistent split between sciences and the humanities, later between engineering and the humanities, in our society, educational system and intellectual life. And to some extent, the author believes, the Element Process Safety Culture was intended by CCPS to face a similar challenge. The author argues, however, that CCPS, industry and companies should go further to pursue RBPS Core Value & Process Safety Cultural Communication(PSCC), both of which would function together as an ethical dimension in context of which messaging and communication between leadership and process safety professionals could be dramatically improved. In another words, â€œtraditionalâ€ messaging and communication activities between leadership and professionals could be, and shall be, broadened to a constitutional (and epistemological) map (roadmap) of PSCC & engineering practice, within which some new essential categories of engineering practice would be identified probably the first time in mankindâ€™s engineering history and found relevant to the future evolving of Code of Ethics of AIChE.

The authorâ€™s conclusion: CCPS, industry & companies should initiate a public debate on the constitutional map of PSCC & engineering practice; and, epistemologically, chemical engineers should play a leading role in the debate, in pursuing the roadmap to bridging engineering to the humanities, and in putting more trust in mankindâ€™s â€œvalues and beliefsâ€ (i.e. in God) rather than solely in instrumental rationality.

Preview Presentation:
Presenter(s):
Long Zhang
Once the content has been viewed and you have attested to it, you will be able to download and print a certificate for PDH credits. If you have already viewed this content, please click here to login.

Case Study of the Domino Effect in a Catastrophic Solid Oxidizer Fire
Practical Approach to Vendor Package HAZOP Studies and Preparing the Package Vendor for the Ordeal
During the design phase of a project, vendor packages (e.g., compressors, water desalination) are typically treated as a "black box" with a very specific...