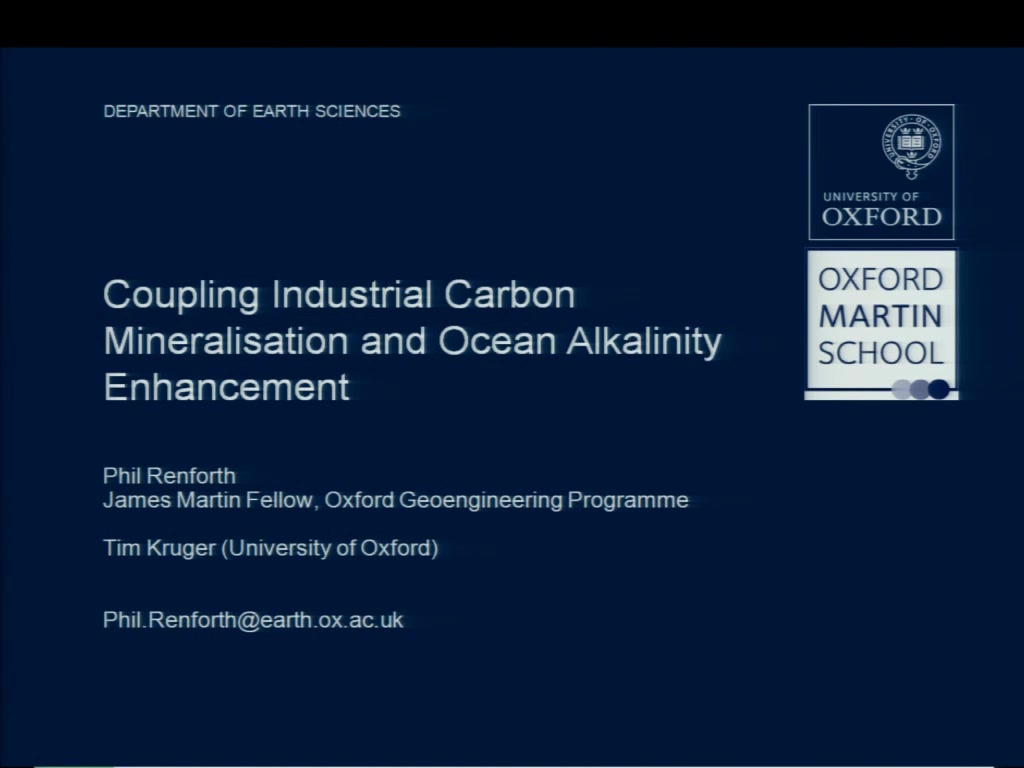 The ocean carbonate system has the potential to store ~102 - 103 billions of tonnes of CO2as a stable bicarbonate solution. Some propose that this system can be manipulated by the addition of oxide and hydroxide minerals to the surface ocean (Kheshgi 1995; Renforth et al., in review), or through ‘enhanced weathering’ of silicate and carbonate minerals on the land surface (Schuiling and Krijgsman, 2006, Manning, 2008, Renforth et al., 2009, Renforth, Submitted). Dissolution products of silicate/carbonate weathering are transported to the surface ocean where they remain in solution.

Mineral carbonation has exclusively considered the precipitation of solid carbonates as the repository for sequestered CO2(e.g. O’Connor et al., 2005). In this presentation, a case will be made for considering the coupling of ‘conventional’ mineral carbonation with ocean alkalinity enhancement. The presentation will touch upon recent enhanced weathering and ocean alkalinity modification research (Renforth, Submitted), and previous work investigating industrial materials (Renforth et al., 2009, Renforth et al., 2011).

Increasing ocean alkalinity was first proposed by Kheshgi (1995), in which particulate hydroxide minerals are added to the surface ocean. Dissolution of the particles promotes a number of reactions in the carbonate system which ultimately results in a drawdown of atmospheric CO2 (Equation 1). The surface ocean (<150m) is relatively well equilibrated with the atmosphere, whereas, the deep ocean is isolated. Therefore, to effect change in the CO2 concentration of the atmosphere, alkalinity modification would need to be limited to the surface ocean (modifying the alkalinity in the deep ocean would have little effect). Other researchers have described similar schemes such as CO2stripping of flue gas using limestone (Rau, 2011), and direct application of limestone into upwelling regions (Harvey, 2008). Generally, the aim of these techniques is to promote the reaction in Equation 2

Although, as Harvey (2008) points out, the saturation state of seawater results in very slow carbonate dissolution rates such that any particles added to the surface would sink out of the surface layer of the ocean before they dissolved. Therefore, material pre-treatment is required to enhance dissolution rate.

The carbon dioxide cycle in the ocean is complex and is influenced by variables such as temperature, pressure, and composition of the overlying air. For a detailed discussion of the thermodynamics of carbon dioxide in seawater the reader is referred to Millero (1995), and Zeebe and Wolf-Gladrow (2001). All atmospheric gases dissolve in seawater, but CO2also hydrates to form carbonic acid. This can be described by the sequence of equilibrium reactions.

The ratio between atmospheric and dissolved CO2 is constant at a given temperature and salinity. Dissolution is driven by the difference of partial pressure of CO2 in the atmosphere and surface seawater. The concentration of total dissolved CO2 (including CO2, HCO3- and CO32-) is dependent on seawater pH. In a closed system, if pH increases, the proportion of dissolved carbon dioxide falls while bicarbonate reaches a maximum at a pH around 7-8. A further rise in pH results in decreasing bicarbonate proportion and therefore carbonate ions reach their maximum. If dissolved CO2 is buffered by atmospheric CO2 (as it is in the surface ocean) a positive pH change will draw CO2into solution.

The basic concept of is to increase ocean pH by adding alkalinity in the form of calcium or magnesium oxide/hydroxide. 1 mole of added calcium or magnesium oxide neutralises 2 moles of carbonic acid, as 2 moles of alkalinity are added. In order to re-establish equilibrium, 2 moles of atmospheric carbon dioxide have to dissolve in the ocean. However, this theoretical level of CO2 uptake is not reached in reality. In reality, between 1.6-1.8 moles of carbon dioxide are absorbed (depending on temperature, and atmospheric CO2concentration) due to equilibrium reactions in the carbonate system.

The surface ocean is already supersaturated with respect to calcium carbonate by 4-5 times. Therefore, it may be intuitive to expect carbonate minerals to precipitate if dissolved Ca and pH were to increase, which would reverse the effect of ocean alkalinity enhancement. However, the presence of magnesium (and phosphate) in the surface ocean inhibits the abiotic precipitation of calcium carbonate minerals below approximately 19-25 times supersaturated (Berner, 1975, Morse and He, 1993). Additional work is required to understand this limitation for seawater perturbed by calcium and magnesium oxides and the biological response to such a proposal. However, if all oceanic surface waters (1.81 x1016 m3) were able to store this additional alkalinity, approximately 1400 Gt of CO2 could theoretically be sequestered (equivalent to a 200 ppmv reduction in CO2concentration in the atmosphere).

Coupling mineral carbonation and ocean alkalinity may be a mechanism for sequestering atmospheric carbon dioxide. While there is potentially numerous ways to achieve this coupling, a direct combination would involve the introduction of ground silicate and water into a high temperature/pCO2 reactor. After solid separation, the high temperature liquor would be circulated back into the reactor and the solid carbonate precipitate would be fed into a calciner, where it is dried and decarbonated. The evolved gases would be returned to the reactor and the solid lime would be distributed into the surface ocean. Such a scheme 1) removes the need to purify and transport CO2 from flue gas streams, 2) CO2 is captured directly from the air which would mitigate non-point source CO2 emissions, 3) 1.7 moles of CO2 are drawn-down into the ocean for every mole of carbonate used (rather than the 1:1 ratio in carbonate precipitation), and 4) the independence of the scheme from point source CO2 emissions means that it could be located in areas with cheap isolated energy. However, such schemes are required to be adjacent to the coast to aid in material distribution, and the CO2 emissions from fuel combustion in the calciner would need to be captured and stored. Furthermore, the thermal treatment of reactor precipitates would likely produce meta-stable calcium silicates (similar to cement production), the surface ocean geochemistry of which has not been considered.

Preview Presentation:
Presenter(s):
Phil Renforth
Once the content has been viewed and you have attested to it, you will be able to download and print a certificate for PDH credits. If you have already viewed this content, please click here to login.