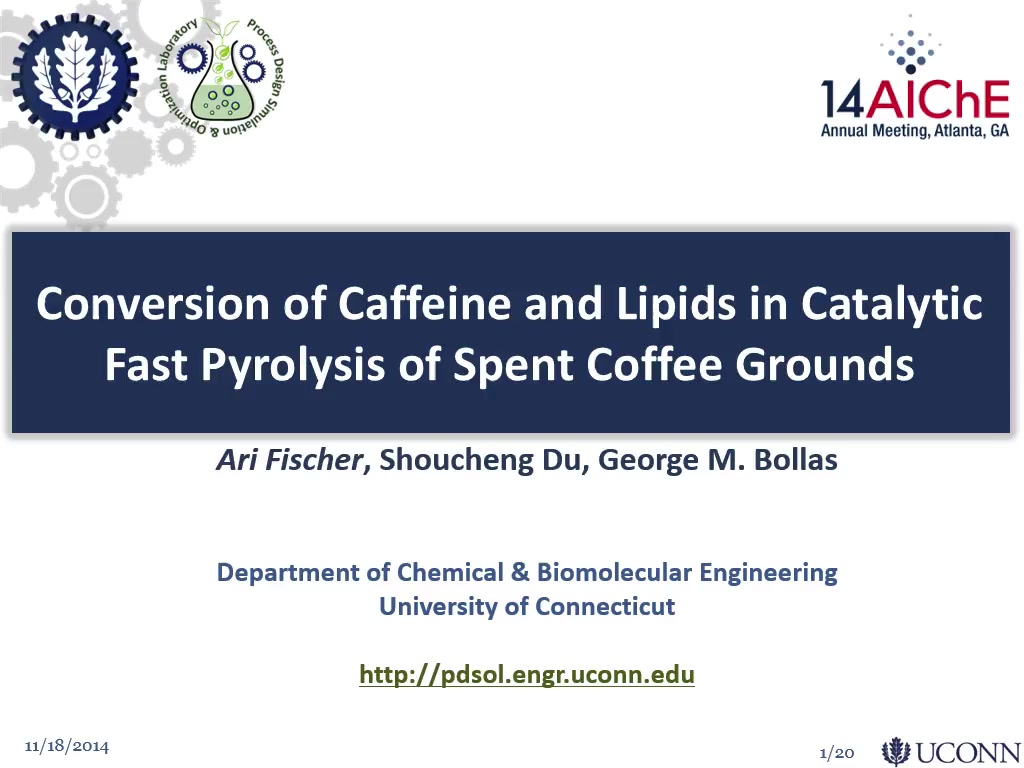 Fast pyrolysis of spent coffee grounds is investigated as a means of valorizing commercial coffee waste. Coffee is the second largest globally traded commodity with imports reaching 6.7 million metric tons in 2013, as reported by the international coffee organization.1 Soluble coffee waste retains 65% of the raw coffee mass and is regularly disposed of in landfills where its environmental impact is experienced through oxygen intensive decomposition.2 In this work, spent coffee grounds are explored as a feedstock to engineer alternative processes for the production of valuable chemicals, commodities, or fuels. In particular, coffeej-s residual fibers, proteins, lipids, and other organic species are chemically converted into fragmented products through catalytic fast pyrolysis. Products include a gas phase containing ammonia; hydrogen; methane; carbon monoxide; and carbon dioxide, liquid phase characterized by condensed vapors and aerosols, and a solid char mainly composed of fixed carbon with residual ash and inorganics. Pyrolysis conditions are tuned to improve liquid quality with reduced oxygen content and increased paraffins and olefins.3 Introduction of shape selective ZSM-5 catalyst promotes decarbonylation and decarboxylation to form aromatics.

Like most biomass feedstocks, spent coffee grounds contain fibers in the form of lignin and cellulose. In addition, proteins and lipids are abundant in spent coffee grounds. Elemental analysis of spent coffee grounds is compared to that of Aspen wood in Table 2.4 Coffee has a lower oxygen content and higher carbon and hydrogen fraction than the wood counterpart. Unlike wood, coffee has significant nitrogen content from caffeine, proteins, and other nitrogen containing compounds, which form ammonia gas as a pyrolysis product. Non-pyrolyzed nitrogen found in the char product was been shown to stimulate plant growth.5 In this view, catalytic pyrolysis of spent coffee grounds is posing a challenging process engineering problem, in which the char product is best not to be burnt for the generation of the heat required for the endothermic pyrolysis reactions; rather it is a useful product. Nonetheless, as a first step towards advanced utilization of used coffee grounds, in-situ catalytic upgrading is studied in this work.

Conventional and catalytic pyrolysis of spent coffee grounds has been explored with fast and slow heating rates. Bok et al.6 employed a fluidized bed reactor with sand to study char, liquid, and gas yields for 673K to 873K generating a maximum liquid product of 54.85 wt% at 823K. The liquid product contained a range of ketones, alcohols, alkanes, aromatics, caffeine, and acids with a water content between 23.96 to 32.93.6 Kan et al.7 performed slow pyrolysis in a TGA with NiCu-|A-Al2O 3 reporting significant fatty acids in the bio-oil product, which indicates resistance to pyrolysis.7 Nonetheless, the nature of coffee derived bio-oil is not understood. This study employed fast pyrolysis experiments to trace product distribution and chemical yields with varying temperature and inclusion of a catalyst. Fast pyrolysis with heating rates of 500-1000 K/minute was executed in a drop bed reactor within a temperature range of 765 to 860 K. ZSM-5 in a 1:1 catalyst to biomass ratio was used to decompose the persistent carbonyls and carboxylic acids previously reported in waste coffee pyrolysis products. Caffeine, stearic acid, linoleic acid, and palmitic acid yields were quantified by GC-MS analysis. Gas yields of hydrogen, carbon dioxide, carbon monoxide, and methane were quantified with GC-TCD analysis. For pyrolysis to be a favorable approach over bio-diesel for upgrading spent coffee grounds, decarbonylation must be promoted. This study focuses on the unique lipid content of coffee grounds and follows trends in fatty acid decomposition and product yield with ZSM-5 and temperature.

New Roman","serif"">Increasing the reactor temperature facilitates vapor cracking of fatty acids, as shown in Figure 1. Comparing 810K to 860K thermal experiments, acid yield decreases from 57.6mg to 34.7mg. Experiments with ZSM-5 catalyst exhibit lower fatty acid yields than thermal experiments at the same temperature. On the other hand, caffeine yields are fairly constant across each experiment. At 810K stearic, linoleic, and palmitic acids are abundant in liquid product while at elevated temperature with ZSM-5 the liquid retention of fatty acids is diminished. Acid cracking results in greater content of deoxygenated fragments such as aromatics and alkanes. Figure 2 shows an increase in the abundance of aromatics, alkenes, and alkanes with a decrease in acids content. To this end, conversion of lipids can be promoted by adjusting pyrolysis. In addition, ZSM-5 increases aromatic content in the liquid product yet decreases alkenes and alkanes. In conclusion, conversion is enhanced with elevated temperature while ZSM-5 catalyst effects liquid distribution. 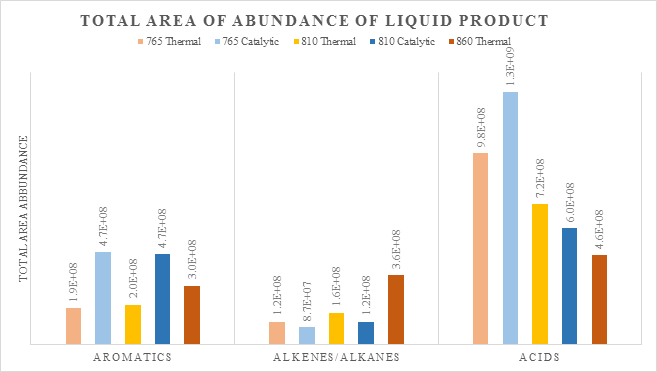 Figure 2:  Recovery of aromatics, alkenes and alkanes, and acids from GC-MS abundance integrated areas for thermal and catalytic pyrolysis in absolute temperature.

Acknowledgments: This work was sponsored by the IDEA Grant of the University of Connecticut.

[1] Imports of all forms of coffee by selected importing countries from all sources January 2014. London: International Coffee Organization.

Preview Presentation:
Presenter(s):
Ari Fischer
Once the content has been viewed and you have attested to it, you will be able to download and print a certificate for PDH credits. If you have already viewed this content, please click here to login.

Compressor Surge Modeling and Control
Axial and centrifugal compressor control is exceptionally challenging due to the extraordinary speed and severity of problems and the extreme consequences in...
Chitosan from Solid-State Fermentation of Soybean Residues By Filamentous Fungi As Biobased Paperboard Coating Additives for HVAC Applications
The HVAC (Heating, Ventilation, and Air-conditioning) industry markets phenolic resin coated-paperboard media for use in the air-cooling of agricultural...