Controlling the Effect of Slug-to-Slug Variation on the Crystal Size Distribution of Perovskite QDs: A CFD-Based Approach | AIChE
Skip to main content

Controlling the Effect of Slug-to-Slug Variation on the Crystal Size Distribution of Perovskite QDs: A CFD-Based Approach 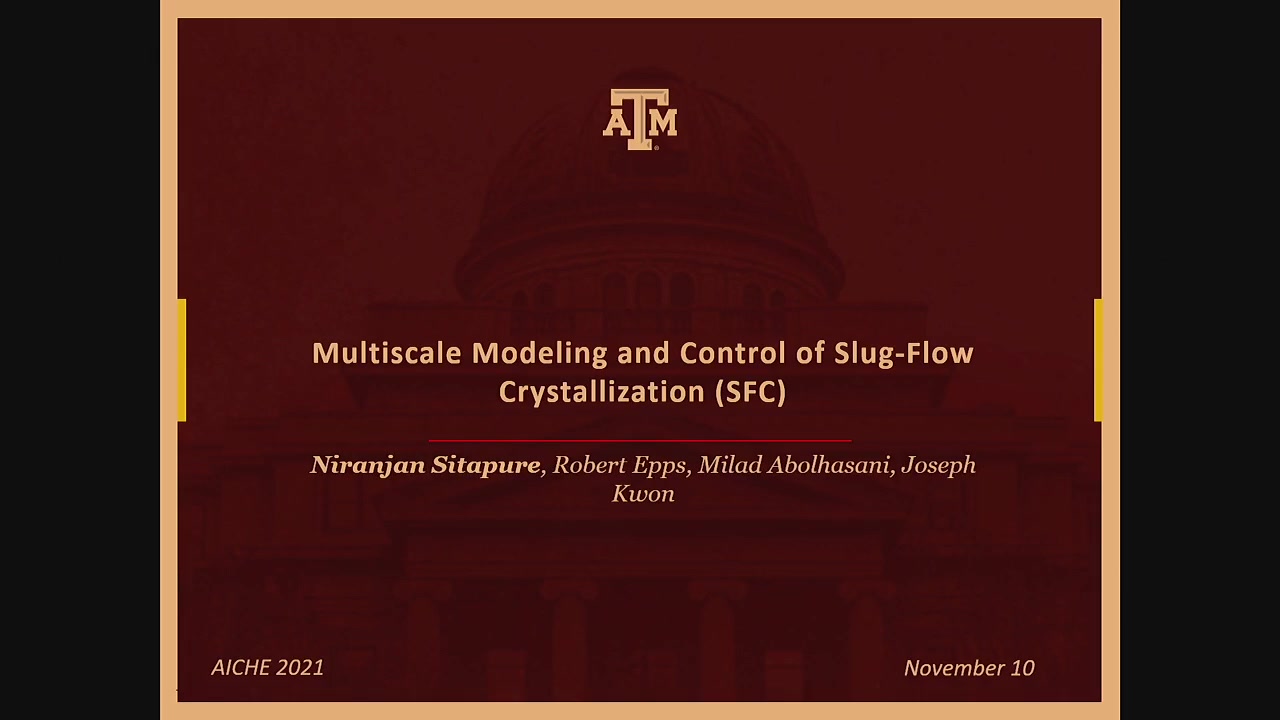 Recently, manufacturing of metal halide perovskite quantum dots (QDs), particularly cesium lead bromide (CsPbBr3), has received substantial attention due to its superior tunable optoelectronic properties (related to their size), and because they cater to wide array of applications such as solar cells, next generation displays, and LEDs. [1] Thus, it is of paramount importance to develop a manufacturing route which results in controlled size and size distribution with a desired surface passivation of CsPbBr3 QDs for the targeted application in photonic and optoelectronic devices. Furthermore, device-level applications demand a fast and large scale production of application-ready QDs. However, the large-scale production of these QDs has posed certain engineering and practical challenges. Specifically, an absence of a well-established crystallization model, lack of batch-to-continuous scale-up studies, and unavailability of set-point tracking platforms are the major roadblocks. [2] The fact that slug flow crystallizers (SFCs) offer a large operation range (i.e., precursor concentration, gas-liquid flow rates) has inspired recent studies on proposing SFCs for large scale continuous manufacturing of metal halide perovskite QDs. [3]

Despite the intriguing advantages of SFCs, there are still some key issues with the operation of SFCs. For example, previous studies have not accounted for the effect of slug-to-slug (S2S) variation on crystal size distribution (CSD), and the absence of a modeling and control framework for CsPbBr3 QDs made it challenging to fine-tune the QD size distribution. [4] In response, we have developed a computational fluid dynamics (CFD) model to elucidate the mechanism of slug formation process in a millifluidic SFC, and then combined it with a slug crystallizer model to accurately model QD size distributions and precursor concentration profiles in SFC. Specifically, the slug crystallizer model was constructed by combining a continuum model with a previously developed kinetic Monte Carlo (kMC) model. [5] Based on the CFD-based multiscale modeling framework (i.e., CFD + continuum + kMC model), an optimal operation problem was formulated to ensure adequate set-point (QD size) tracking, resulting in a narrow CSD. Overall, (a) the proposed multiscale model is in good agreement with the experimental results; (b) the CFD simulation highlights the region in which the SFC should be operated (i.e., stable slug flow regime); and (c) the optimizer is capable of effective simultaneous set-point tracking (QD size) and disturbance rejection (S2S variation) while ensuring a narrow CSD.

In summary, the CFD model was used to identify a stable slug regime and quantify the S2S variation in a millifluidic SFC. Additionally, a dynamic multiscale model for a SFC was developed to describe the temporal evolution of average QD size and CSD. Lastly, an optimization-driven controller scheme was implemented to ensure that the QDs match the industry specifications while maintaining a narrow CSD. Overall, the proposed work is a major leap towards continuous nano-manufacturing of metal halide perovskite QDs, which will be crucial in meeting market demands of the optoelectronics industry in the coming decade.

Preview Presentation:
Presenter(s):
Milad Abolhasani
Robert Epps
Joseph Kwon
Niranjan Sitapure
Once the content has been viewed and you have attested to it, you will be able to download and print a certificate for PDH credits. If you have already viewed this content, please click here to login.

Innovative Zoneflow® Reactor Technology- Gearing for Future in Steam Reforming for Hydrogen Generation
Numerical Analysis and Experimental Verification of Boehmite to Alumina Particles Conversion Under Concentrating Light
Solar energy conversion to chemicals and fuels receives progressively more attention. Many of the possible conversion routes incorporate particles or could be...