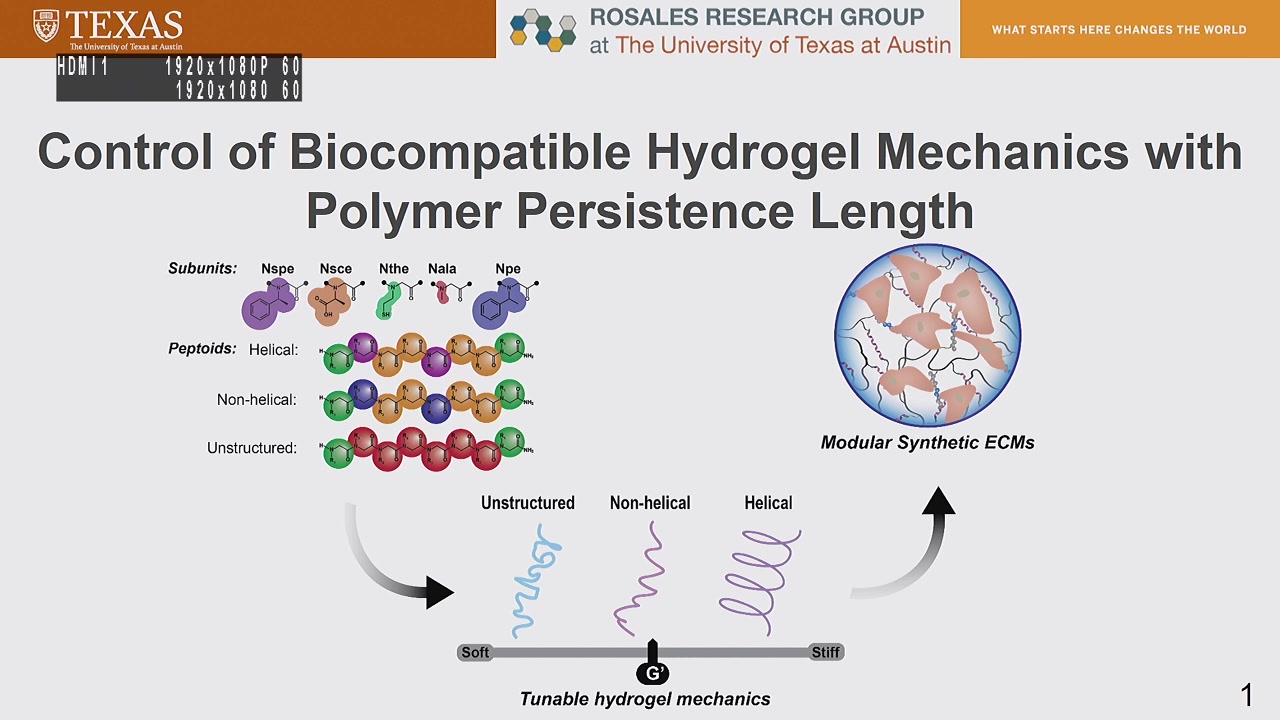 Human mesenchymal stem cells (hMSCs) are proving important in cellular therapies and tissue engineering applications; however, more work is needed to develop synthetic extracellular matrices (ECMs) for their culture and delivery. In particular, hMSCs are highly sensitive to matrix mechanics, but this property is often controlled by increasing the crosslinking density in synthetic polymer networks, which intrinsically couples hydrogel mechanics to permeability, network connectivity, and ligand density, all of which affect cell migration, proliferation, and differentiation. In contrast, the native ECM is composed of hierarchically structured biopolymers containing precise monomer sequences and chain shapes with high molecular rigidity (e.g., persistence lengths) to yield stiff hydrogels at relatively low polymer contents. Thus, a potential strategy toward developing new hydrogel systems with independently tunable mechanical properties may be to control the persistence lengths of the constitutive polymers.

Toward this end, we have developed a synthetic hydrogel system using commercially available hyaluronic acid (HA) macromers with non-natural, sequence-defined poly(N-substituted glycines) (peptoids) as crosslinkers. Peptoids are of particular interest due to their large chemical diversity, tunable persistence length, and high degree of structural control. Particularly, their lack of intermolecular hydrogen bonding allows for induced secondary structure with a wide range of bulky, chiral monomers. Specifically, we have been investigating three peptoid crosslinkers: 1) the chiral, helix inducing sequence (NsceNsceNspe)n, where Nspe refers to (S)-N-(1-phenylethyl)glycine and Nsce is (S)-N-(1-carboxyethyl)glycine, 2) an analog with a racemic mixture of (S) and (R)-N-(1-phenylethyl)glycine to disrupt helix formation, and 3) a control peptoid consisting of sarcosine repeats with no defined secondary structure. These peptoids were successfully synthesized via solid phase submonomer synthesis with additional cysteamine-based residues included on both termini for thiol-ene crosslinking. Next, the HA was functionalized with norbornene groups, and hydrogels were formed via thiol-norbornene photo-click chemistry. Rheometric data indicated a marked increase in the elastic modulus, E, of hydrogels formed with the helical peptoid crosslinker. In addition, increasing the length of the chiral peptoid crosslinker further increased E, in direct opposition of the trend predicted by rubber elasticity theory. We also demonstrated that these hydrogels are hydrolytically and enzymatically stable and are non-cytotoxic to human dermal fibroblasts seeded on the hydrogel surface functionalized with a cell adhesive ligand. Overall, this method for altering matrix mechanics utilizing polymer stiffness enabled the hydrogel to maintain a constant cross-linking density and network architecture. Further studies investigating the impact of molecular rigidity on cell-matrix interactions will facilitate the design of more biomimetic artificial ECMs.

Preview Presentation:
Presenter(s):
Logan Morton
Adrianne Rosales
Once the content has been viewed and you have attested to it, you will be able to download and print a certificate for PDH credits. If you have already viewed this content, please click here to login.