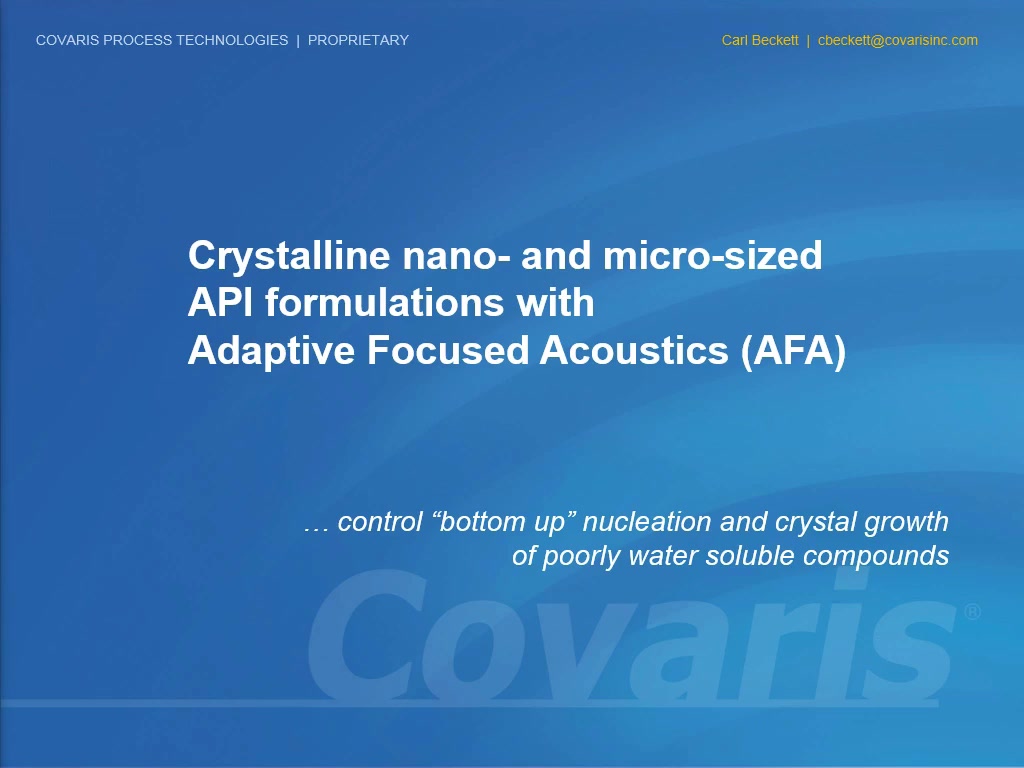 Many drugs currently in development are either water insoluble or lipophilic, thus creating formulation challenges to administer these drugs at a high dose.  In some situations, nanoparticles are an appropriate formulation strategy as a result of their intrinsic properties such as small shape and size (e.g., radius) and large surface area to volume ratios.  Nanoparticles can be generated by grounds up crystallization, which is typically processed in batch mode.  One basic approach of crystallization is to vary the solubility of the solute of interest with different methods, such as vary the ratio to non-solvent vehicle (anti-solvent).

Low frequency, unfocused ultrasound has previously been demonstrated for improving crystallization kinetics.  However, unfocused ultrasound has efficiency limitations due the inability to focus the energy, creating issues in thermal management such as non-uniform mixing, and uncontrolled thermal fields.  Additionally, these unfocused solutions are not able to provide sufficiently tight, uniform nucleation control at the chemical solvent boundary interface that is required for nanoparticle production.  The Covaris Adaptive Focused Acoustics? (AFA) technology is a highly controlled mechanical based process that provides a practical tool to precisely control both the nucleation formation and the rate of crystal growth.  The high energy efficiency of AFA avoids excessive heat generation, reducing potential thermal damages to the sample and allowing greater control over thermally dependent chemical reactions.  Moreover, the precisely controlled energy delivery improves the reproducibility of the sample processing for higher quality control.

As a model of nanoparticle formation, a Solvent:Anti-solvent crystallization method with an active AFA energy field was tested in different batch volumes as well as in a continuous flow format.  Cinnarizine was used as a model compound.  Nanoparticles were measured using a Malvern Mastersizer 3000, and particle sizes were reported for 10th percentile, 50th percentile, and 90th percentile populations (d10, d50, and d90 populations respectively).

Initial studies were performed in triplicate on batch scale processing of 2 mL samples.  Parameters evaluated include:

For comparison, a control was run at each setting.  The control was mixing 2 mL samples via a magnetic stir bar in a 20 mL scintillation vial for the same time duration of 5 minutes.

In all cases, the particle sizes of the AFA-processed samples were lower and more reproducible than the control.  A typical comparison is shown in the following tables:

Table 2. Results from the AFA method.

A continuous manufacturing process was evaluated with the following settings:

Control of particle size was demonstrated by varying PIP.  Particles sizes at 300 PIP are listed in the following table.

The current study demonstrates the technical feasibility of using Adaptive Focused Acoustics (AFA) to control nucleation and crystal growth for continuous flow Solvent:Anti-solvent crystallization.  Nanoparticles were successfully and reliably produced in a continuous flow process with d50 particle size populations below 200 nm.  By using the AFA system to control the crystallization process, a choice of nano- or micron-sized crystals can be easily generated with a simple change of PIP process parameter.  In addition, the isothermal, reproducible AFA process enables control of fluid shear effects on secondary nucleation to minimize crystal size, accelerate the overall rate of crystal formation, and improve yield.  The effect of AFA on the morphology of the crystal is currently under investigation.

Preview Presentation:
Presenter(s):
Carl Beckett
Once the content has been viewed and you have attested to it, you will be able to download and print a certificate for PDH credits. If you have already viewed this content, please click here to login.