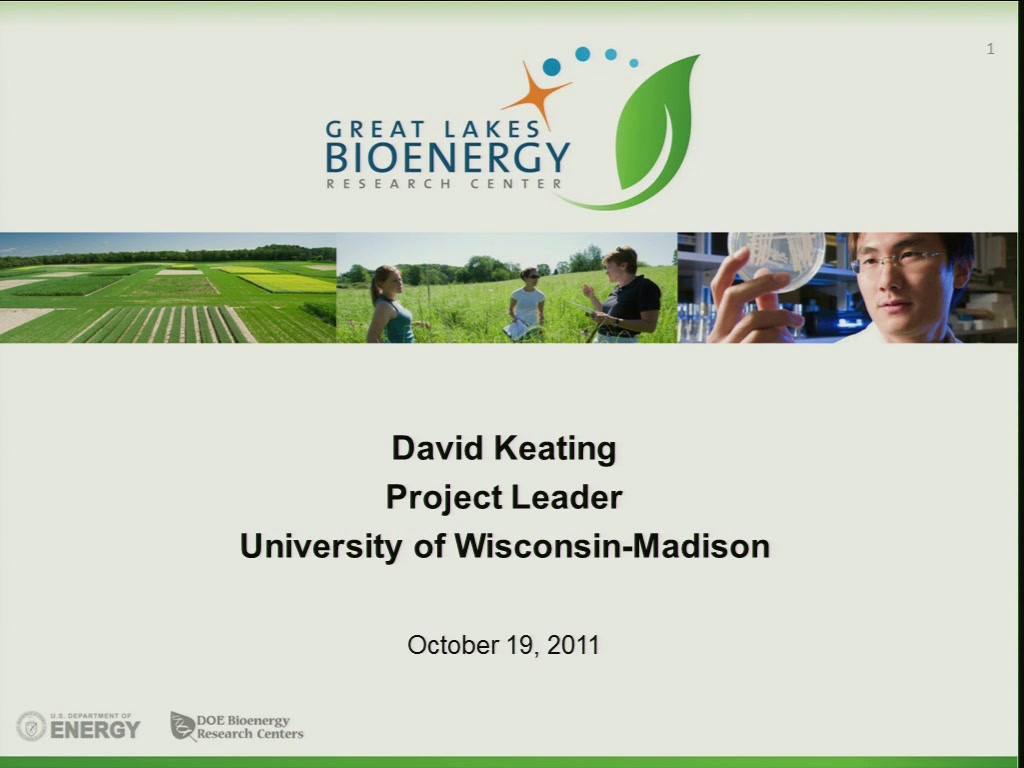 Research within the Great Lakes Bioenergy Research Center aims to better understand the bottlenecks associated with bioconversion of lignocellulose to liquid transportation fuels, knowledge which will then be used to improve the efficiency of this process. Much of these studies are currently focused on the Gram-negative bacterium Escherichia coli, due to its sophisticated genetics, well-understood physiology, and widespread industrial use.

To better understand the limitations associated with microbial biocatalysis of lignocellulosic biofuels, we have engineered E. coli strains capable of high-level ethanol production and tolerance. To develop efficient E. coli ethanologens, we have constructed mutations that reduce alternative pathways of election flow, and introduced the pyruvate decarboxylase and alcohol dehydrogenase genes from Zymomonas mobilis. In addition, we have carried out extensive directed evolution of E. coli, which has resulted in strains capable of growth in the presence of 10% ethanol. These strains are currently being subjected to a systems-level microbial analysis during lignocellulosic bioconversion. In collaboration with the Dale laboratory, we have generated enzymatic hydrolysates of AFEX-pretreated corn stover at high solid loadings. Furthermore, we have developed methodology to measure extracellular amino acids, metabolic endproducts, intracellular metabolites, and global transcription. We have used these techniques to characterize the physiological state of our ethanologenic strains during fermentation in lignocellulosic hydrolysates. Our initial analysis has already generated several surprising findings. First, lignotoxins within the hydrolysate appear to strongly limit the production of biomass, but have a more modest effect the conversion of glucose to ethanol. However, these inhibitors appear to strongly limit the conversion of xylose to ethanol. Second, microbial growth in lignocellulosic hydrolysates is a dynamic process, in which global transcription and overall physiology change dramatically during the course of fermentation. Our systems-level analysis of these strains has identified transcriptional and metabolic changes that provide insight into the mechanism of action of the lignotoxins. We are using this information, as well as data from similar experiments with lignotoxin-tolerant mutants, to generate new ethanologens with improved productivities under these conditions. Furthermore, we expect these studies will produce an improved molecular understanding of the current limitations of ethanologenesis in these strains, which we expect will be applicable to diverse ethanologenic microorganisms.

Preview Presentation:
Presenter(s):
David Keating
Once the content has been viewed and you have attested to it, you will be able to download and print a certificate for PDH credits. If you have already viewed this content, please click here to login.

Modeling and Optimization of Algae Based Biodiesel Production
Processing of biodiesel from algae biomass has attracted much interest in recent times due to many reasons. Significant amongst them are global warming and...
Power Dissipation In Microwave-Enhanced In-Situ Transesterification of Algal Biomass
The main objective of this study was to investigate the power controlled effect on microwave-accelerated simultaneous extraction and transesterification (in...