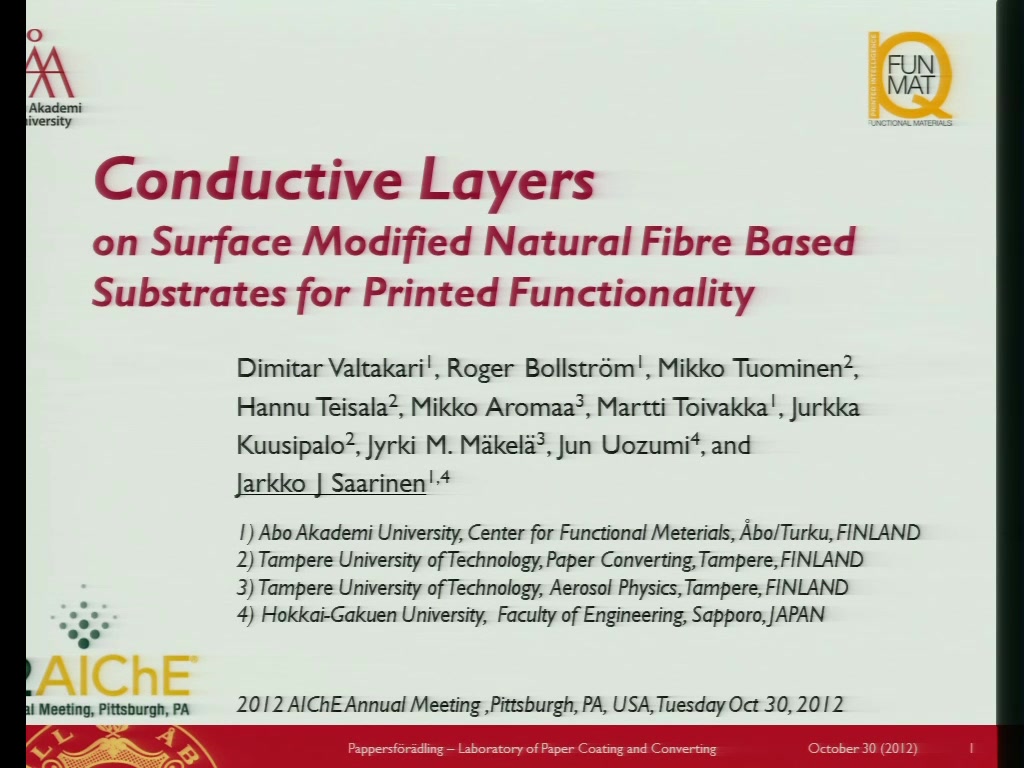 Formation of conductive surfaces by printing has been studied using an IGT flexographical test printer with PEDOT-PSS and silver conductive inks on coated papers. Printability of multilayer coated paper and TiO2 nanoparticle coating generated by the liquid flame spray process are compared to commercial plastic film used typically in printed electronics applications. The wettability of TiO2 nanoparticle coating can be altered between superhydrophobic and superhydrophilic states by ultraviolet light. It is observed that superhydrophobicity induced by TiO2nanoparticles results in poorer ink setting and hence lower conductivities with water-based PEDOT:PSS ink. Therefore, we observe conductivity only after several successive prints. On contrary, we observe several orders of magnitude better conductivities when using a silver ink in flexography. It is believed that sustainable natural fibre based substrates will find more applications in printed electronics application in the future.

Printed electronics and intelligence have been under a growing interest since the start of the 21stcentury with the market value forecasts up to 300 billion USD by 2025 [1].  Conventionally such applications have been produced on plastic films. However, paper based electronics has been studied recently [2], and it has been shown that simple, all-printed transistors can be made on multilayer coated paper [3]. Natural fibre based substrates are rapidly finding new applications outside of the conventional graphical arts industry.

Paper has many advantages over the plastic films: it is made of renewable materials and it is cheap with tailorable surface properties. Paper can be 1000 times cheaper than glass substrates and 100 times cheaper than plastic films [2]. Cellulose, the major component of plant biomass, is the most abundant biopolymer on Earth with annual production up to 1.8 × 1012 tonnes [4]. However, compared to plastic films, paper is porous, uneven, and rough network of fibres. Typically paper surface is smoothened by dispersion coating consisting mineral pigments and organic binders. Recently, nanoscale coating techniques including layer-by-layer and liquid flame spray coating have been studied that allow surface functionalization with significantly reduced coating amounts. Nanoscale control of surface properties is crucial for achieving good performance in electronics applications.

This study concentrates on printing large area conductive surfaces on various coated paper grades. Such conductive surfaces are needed, for example, in electrochromic displays and in photovoltaic (PV) cells. In current PV applications indium tin oxide (ITO) is typically used as a transparent conductive electrode. Unfortunately, there are two major drawbacks with ITO: first, it is expensive and scarce material. Secondly, the brittle nature of the ITO films makes them not suitable for flexible substrates. These limitations prevent the use of ITO on low-cost, large-scale PV applications. Conductive polymers such as poly(3,4-ethylenedioxythiophene)/poly(styrenesulfonate) (PEDOT/PSS) may be suitable candidates as they can be both transparent and conductive. However, there is a strong correlation between conductivity and opacity i.e.the better the conductivity, the more opaque is the film. This has been a bottleneck but recent developments have eased the problem of achieving good transparency with high conductivity.

Our study concentrates on using flexographical printing with conductive inks on various coated paper grades to form large area conductive surfaces. We use two different natural fibre based substrates: a multilayer pigment coated grade and a nanoparticle coated paperboard in comparison to traditional plastic film. The paperboard surface is functionalized by TiO2nanoparticles using a liquid flame spray (LFS) coating process. In LFS process liquid precursor of titanium (IV) isopropoxide (TTIP) is fed into a high temperature and velocity flame in which the metal salt evaporates and nucleates to form nanoparticles of the metal oxide. These nanoparticles can be collected on a paperboard surface in on-line process flow and they cover the whole surface passing under the flame.

We use three different printing substrates in our study: a commercial poly(ethylene phthalate) (PET) film is used as the reference plastic film, a multilayer coated paper, and a double pigment coated paperboard. The multilayer coated paper contains a commercial finepaper that is coated by a barrier layer consisting of platy kaolin blended with ethylylene acrylic latex to prevent ink penetration into the substrate. To adjust printability, a topcoating layer consisting of fine platy kaolin and fine blocky kaolin blended with SB latex was coated on top of the barrier layer. The paper was further calendered three times through a softnip calender. The paperboard sample was coated by TiO2nanoparticles using a coating and lamination pilot line at the Tampere University of Technology (Tampere, Finland) with a 30 m/min web speed. The average diameter of the nanoparticles is between 40 and 80 nm.

The contact angles of water, PEDOT:PSS (solid content 1.0 – 1.4 %), and silver printing inks for flexography were measured. With TiO2nanoparticle coated samples we observed switching of superhydrophobic surface into superhydrophilic by UV light irradiation. Similar behavior was observed with water based PEDOT:PSS ink but no effect on solvent based silver ink was found.

The conductance values of PEDOT:PSS flexographical prints were measured after drying in an oven (1h, 120 °C). It was observed that plastic films require more successive print layers (here 4 layers) to obtain conductance due to poor wetting of smooth surface. The best performance was observed with a multilayer coated paper with controlled ink setting on the porous top layer. With TiO2nanoparticle coated samples we observed that surface wettability plays an important role when printing with water based flexographical inks. The conductivity values were lower when printing on superhydrophobic surface that is expected due to poorer wetting of the surface and formation of an uneven print layer.

Poor ink setting both on plastic film as well as on superhydrophobic LFS TiO2substrate was observed from the scanned images of the flexographical PEDOT:PSS prints that correlates well with the observed low conductivities. In multilayer coated structure the barrier layer below the thin and porous top coating layer prevents the ink penetration deep into the structure resulting in the lowest resistance values.

We have recently demonstrated UV sensor functionality on multilayer coated paper by using flexograhically printed silver electrodes with conductive polymers [5]. Here all the silver ink printed samples were sintered in an oven at 120°C for 60 min. We observe non-conducting layer with a single print. This is due to two factors: first, the amount of silver ink transferred from the anilox is too small in order to fill the whole surface. Secondly, the number of cells/cm in our anilox cylinder may be too small compared to the cell volume i.e.individual cells are visible in the final print. Hence, no conductivity is observed as there is no connecting path between the individual silver flakes below the threshold value. After the second and third successive prints we observed good conductivity (sheet resistance < 10 Ω/□) values as flakes become attached to each other. Similar behavior was observed in our earlier study [5] that related the surface coverage values to the observed conductivities

Preview Presentation:
Presenter(s):
Jarkko J. Saarinen
Once the content has been viewed and you have attested to it, you will be able to download and print a certificate for PDH credits. If you have already viewed this content, please click here to login.

Model Predictive Control: An Overview and Selected Applications
Model Predictive Control (MPC) is the most commonly advanced control technique applied in the chemical process industries. In this Webinar, basic feedback...
Project Execution Using the Stage Gate Process
In recent years more and more projects are being executed effectively using the “Stage Gate” process. This presentation provides an overview of the Stage Gate...