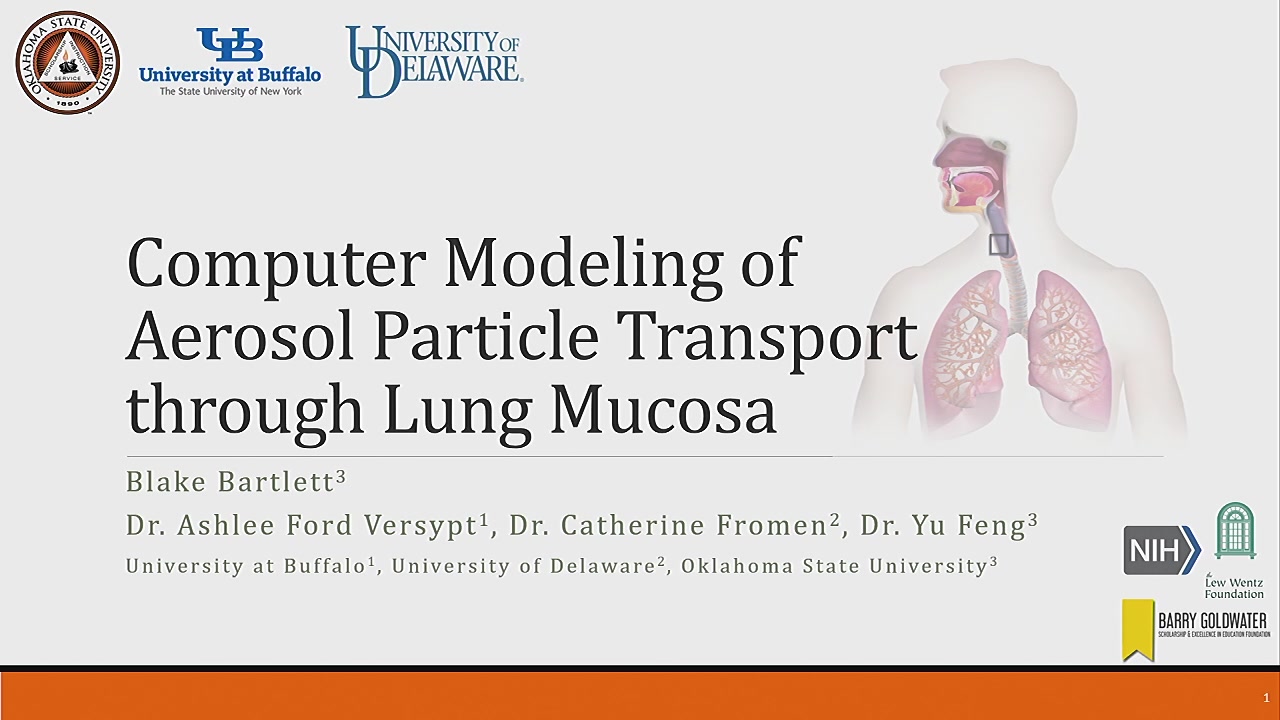 Diseases of the lung are some of the most common and deadly in the world, accounting for 4 of the top 10 global causes of death according to the World Health Organization. Due to the poor bioavailability of drugs traditionally administered orally or through injection, these treatments have limited efficacy for treating lung diseases. Technology is emerging that allows an aerosolized drug dosage to be delivered directly to the diseased area; however, the mucus layer separating the airways from the tissue (and the blood) remains a barrier to this method. In order to address this, we have constructed a physics-based computational fluid dynamics model of the mucosal interface between the airways and the lung tissues, providing insight into how a vaccine, antibiotic, or other drug must behave to effectively reach the target tissue in various lung regions.

The lung has a system called the mucociliary clearance mechanism in place to clear foreign particles (e.g., cigarette ash, dust, and bacteria), prevent infection, and keep the lungs healthy. A layer of mucus on the surface of the inner lung is constantly pushed upward towards the throat by a bed of cilia, and most particles that impact on the mucus are cleared from the lungs quickly and without incident. This mechanism that for preventing a disease from being contracted or from particulate damage remains a barrier to drug delivery, as those particles must cross the same thick, non-Newtonian mucus layer.

We developed a model using COMSOL Multiphysics software to build a rectangular domain, simulating a cross-sectional slice of the radially symmetrical mucus layer. Data from the literature is used to determine details like mucus depth, velocity, and viscosity. The mucus layer moves upwards towards the throat in laminar flow, imitating the mucociliary effect, and the lower periciliary layer has slower net movement due to the regular beating of the cilia that move the mucus. The viscoelastic properties of mucus are accounted for in the model, with its shear-thinning effects parametrized to a Carreau model. The â€œdrugâ€ particles enter from the airway side and move through the fluid by convection. The Stokes-Einstein equation is used in conjunction with a hydrodynamic and steric hindrance model to calculate an effective diffusivity through the network of glycoproteins that comprises the mucus. Given these inputs, the model generates profiles showing particle concentrations at any point in the simulation domain at any particular time. The model is extremely customizable, easily modified to simulate other drugs or any other particle (including pathogens) provided some properties are known. Complex relationships may be calculated using a small number of easily-measured variables, such as particle diameter. Lung conditions can also be quickly altered to meet the needs of the user (for example, the mucus layer is much thinner in the alveolar region, and the mucus of cystic fibrosis patients is much denser than average). Thus, the model can quickly provide greater insight into the efficacy of new lung treatments, biomechanics of pathogens, and capacity of prophylactics. With the simulation results, we locate optimum dosage sites for a range of particle properties, as the advection of the mucus causes a maximized amount of drug to reach the epithelium some distance upstream of where it impacts the mucus. These results tell us how deep in the lungs a dosage must be delivered and how high its concentration must be to be efficacious.

Acknowledgement: B. A. Bartlett was supported by Oklahoma State University Wentz Research Scholarship and is a Goldwater Scholar. This project was supported in part by NIH Award R35GM133763 to A. N. Ford Versypt.

Preview Presentation:
Presenter(s):
Blake Bartlett
Yu Feng
Catherine Fromen
Ashlee Ford Versypt
Once the content has been viewed and you have attested to it, you will be able to download and print a certificate for PDH credits. If you have already viewed this content, please click here to login.

A Multi-Fidelity Mechanistic Modeling Framework for Wet Granulation Processes: Characterization and Technology Transfer
Although wet granulation processes are widely used in a range of industries, they are typically designed empirically and operated inefficiently. In order to...
Fundamental Properties and Simulation Results - The Importance of Having the Foundation Correct
Most simulations are done using models based in equations of state. The quality of the parameters (Tc, Pc, and acentric factor) used by most equations of state...