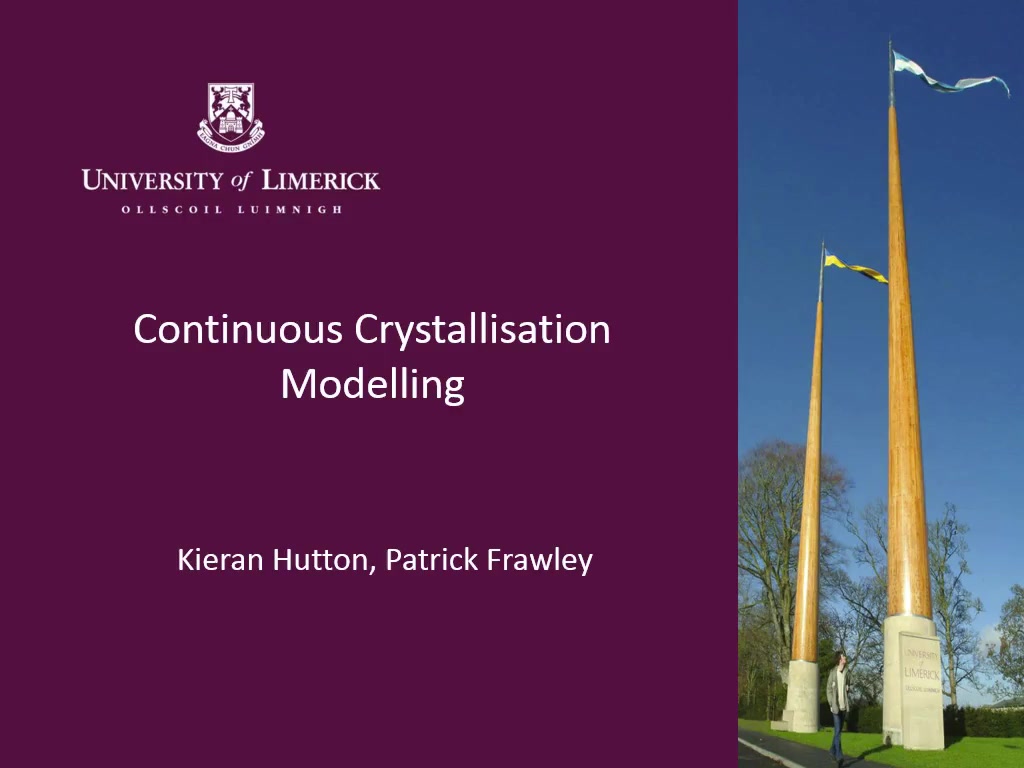 Developed here, in the MATLAB computing environment is a numerical model of continuous combined cooling and anti-solvent crystallization of Paracetamol in methanol and water. The model incorporates the effects of particle growth, nucleation (primary and secondary), aggregation and breakage as well as convection through the vessel, assumed to be perfectly mixed. The kinetic parameters used in the model were obtained and validated from batch cooling and anti-solvent experimental investigations [8] [9]. The methods and technologies developed and implemented here are very valuable in that the model can be applied to or adapted for any crystallization once kinetics are known.

Due to the highly non-linear behaviour and physical inter-dependence of such processes, it is necessary to be able to determine the underlying driving mechanisms for particle dynamics. For example, is the system growth, aggregation or nucleation dominated? Analysis techniques for simple growth/nucleation systems have existed for some time and are well understood, however techniques to elucidate this complex cascade behaviour is lacking if non-existent. In this work, methods have been developed to analyse the underlying particle dynamics for cascaded anti-solvent/cooling crystallizations. The algorithms developed in this work allow for the determination of the relative contributions of each of the physical phenomena to the underlying dynamics. For example, it may be determined what the dominant source of particle size increase or surface area generation is. This decoupling of the physics affords the capacity to design/modify continuous systems to maximise or minimise any one or more desirable or undesirable mechanisms of crystallization.

Optimisation of crystallization systems’ operation is vital for their continued efficient operation. Outlined in this text are methods for determining the operating conditions which will give either a maximum particle size or maximum recovery for a given feed mass flow and tank configuration. It must be noted that this is not limited to the maximum particle size but may be used to target a specific particle size.

The model has the capability of fully analysing the overall behaviour of the system as well as affording a near complete understanding into the underlying physics and dynamics of such a system. It must be noted that the results shown here are for a single feed composition with no recycle and at a fixed stage temperature. Further analysis of the effects of composition, stage temperature and recycle is possible without further development.

In conclusion, a powerful computational model has been developed which, if coupled with experimental campaigns and data will afford a very deep understanding of the dynamics of continuous crystallization. This depth of understanding can feed directly into the design of new processes or the optimisation of the operation of existing processes.

Preview Presentation:
Presenter(s):
P.J. Frawley
Once the content has been viewed and you have attested to it, you will be able to download and print a certificate for PDH credits. If you have already viewed this content, please click here to login.

Continuous Control of a Batch Crystallization System with Deep Reinforcement Learning
The development of controllers for chemical process models requires careful examination of the process dynamics, development of mathematical models, tuning of...
Analysis of the Capabilities of Cybersecurity Defenses
The threats to our critical infrastructure continue to evolve. As new cyberattacks are created and discovered, it is incumbent upon us to evaluate the...