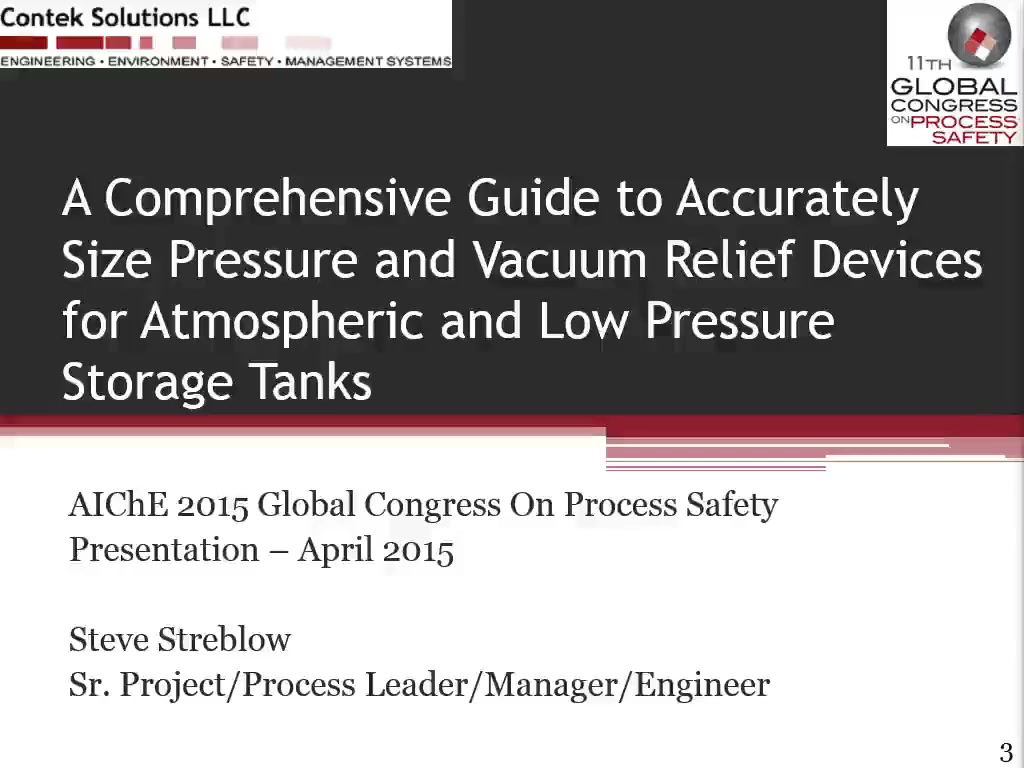 Recently, increased environmental concerns and regulation have made proper storage tank venting a priority. One of the components of a tank venting system is the Pressure and Vacuum Relief Valve (PVRV).   Pressure and Vacuum Relief Valves protect tanks against rupture due to increases in internal pressure or imploding due to vacuum, thus avoiding permanent damage to the equipment.  Fixed roof tanks are susceptible to rupture from many scenarios including whenever liquid is pumped into the tank or due to changes in the vapor pressure of the contents, caused by significant thermal changes. During these instances, the PVRV protects the tanks from over-pressure by depressurizing the tank.  This procedure is known as outbreathing.  Alternately, imploding of a tank may occur for various reasons, including the pumping out procedure or due to thermal changes. This is due to the fact that as the liquid level in the tank decreases, the pressure in the vapor space also decreases creating a vacuum. The vacuum can only be broken by allowing either atmospheric air, an inert gas such as Nitrogen, or blanket gas to enter the tank.  This is known as inbreathing.  PVRVs typically vent to atmosphere but can also have provisions to allow the vapors to be piped away for recovery or destruction.

The PVRV is typically installed on a flanged nozzle at the top of the fixed roof of an atmospheric or low pressure storage tank. Besides protecting the equipment from permanent damage, PVRVs also serve to minimize emissions to the environment, as well as minimize loss of product due to evaporation, by controlling tank venting. When combined with a well-designed vapor recovery system, the loss of product can be cut to almost zero, thus leading to significant money savings, especially for tank farms. These devices also help reduce corrosion of the surrounding equipment due to less fugitive emissions.  Therefore, the cost of overall plant maintenance is also decreased.

The use of Pressure and Vacuum Relief Valves is mandated by almost all of the recognized regulatory institutions involved in tank safety, such as API, OSHA, NFPA etc.   API 12F, Section 6, further stipulates the use of Emergency Pressure Relief Vents, in addition to PVRV’s when storage tanks containing flammable liquids are exposed to fire, unless the tanks in question are installed in remote locations.   The venting system must be designed in accordance to API 2000 which supplies the rigorous formulas to calculate both normal venting and emergency (fire case) venting.  Annex B and C of API 12 F provide “short cut” tables with values for thermal venting and emergency venting for different tank sizes, respectively.

On smaller tanks, the PVRV valve alone may be adequate to provide sufficient flow capacity for emergency venting.  Larger tanks however, may require additional Emergency Pressure relieving devices in the form of larger or additional vent valves or additional thief hatches.  Most tanks already come furnished with a standard size thief hatch, usually 8 inches.  However, it is often a mistake to assume that it will be adequate to handle the emergency venting requirement, especially for larger size tanks.

This paper presents a viable approach to ensuring that the tank venting system is adequately designed to handle the maximum relieving requirements in keeping with the most stringent stipulations of the various codes such as API 12F, API 2000 and 29 CFR OSHA 1910.106.  It will discuss in detail several topics such as case studies of common mistakes made when using API 12 F; recent changes in API 12 F and API 2000; inconsistencies between API 2000 and API 12F; use of a quick inexpensive dynamic method to calculate the worst case tanking venting scenarios; the effective reduction in flow thru a standard 8” opening when a thief hatch is installed and the further reduction in capacity by the installation of a low emission model.

Preview Presentation:
Presenter(s):
Steve Streblow
Once the content has been viewed and you have attested to it, you will be able to download and print a certificate for PDH credits. If you have already viewed this content, please click here to login.

Production of Synthetic Fuels from Natural Gas and Bio-Based Feedstock
Ceramatec has been developing a system for production of liquid hydrocarbons from natural gas, coal, biomass, and biogas from anaerobic digesters. The work has...
Getting It Right - Building an Iron-Clad GHG BACT Cost Effectiveness Calculation
Determining which technology constitutes GHG BACT for a new or modified facility often hinges on the GHG BACT cost calculation. The calculation, when done...