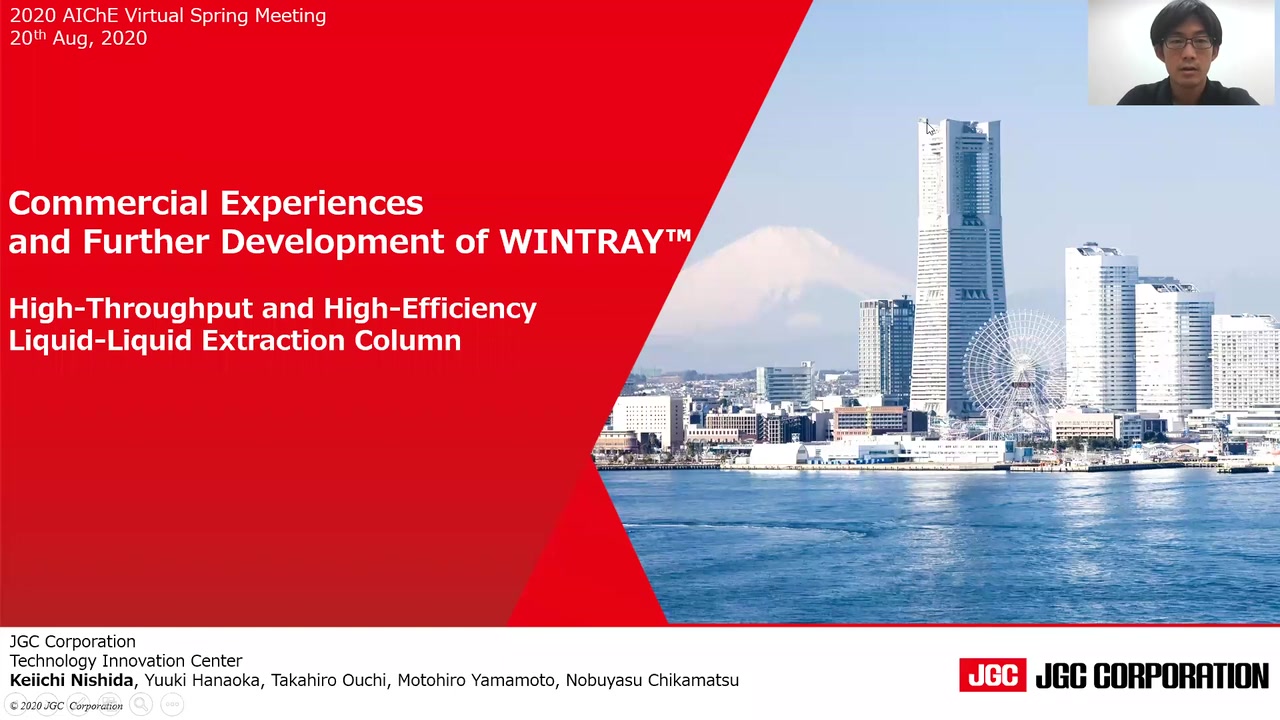 Mixer-settler can achieve high stage efficiencies because of its long residence time. And it can handle high-viscosity liquids. The operation range is relatively wide because the rotation speed of the agitator is adjustable in the field. It is used in petrochemical, nuclear and nonferrous metal fields. But it requires huge plot area especially when a lot of stages are required. In addition, the equipment and maintenance cost are relatively high because it comes with the several number of agitators.

Rotating disc contactor (RDC) is also widely used in petrochemical, chemical, pharmaceutical and nonferrous metal fields. RDC comes with several theoretical stages in a single column with single agitator, therefore the equipment cost, and operating cost are moderate. And the rotating speed of the agitator can be adjustable in the field like as mixer-settler. On the other hand, because its throughput is relatively lower compared with other extraction column, the diameter of the column tends to be huge. And due to the difficulty in preventing the back mixing in the column, scale up and diameter of the extraction column are limited. In addition, the equipment cost is higher than static extraction column because it has agitator.

Sieve Tray which comes with multi perforated-plates, is relatively effective respect to both capacity and extraction efficiency of the extraction column. It also provides the several theoretical stages in single column like as RDC. It is static equipment, therefore, the equipment cost and maintenance cost are relatively lower than those of RDC. The scale up is relatively easy, and it is used in refinery, petrochemical and chemical industrial fields. However, because of the demand for increased petrochemical production and for cost reduction of the extraction process, further improved throughput and extraction efficiency for the extraction column has been desired.

The WINTRAY®which is liquid-liquid extraction column, can obtain a high-throughput and high-extraction efficiency. It combines two kinds of trays, composed of plates and weirs with unique shape openings, arranged alternately. The heavy liquid is dispersed into the light liquid in the column by the openings on weirs. After dispersed phase liquid accumulates on trays, it flows through the openings in each weir and then changes to liquid jets and makes several dispersed drops. The dispersed drops are larger than those formed in conventional columns, and shape is also different. The sequence of drop formation, movement and coalescence is achieved as the dispersed liquid moves from one tray to the next. In addition, higher frequency of the series involving dispersion, movement and coalescence can be attained with closer tray spacing. Therefore, the use of the WINTRAY® extractor results in both higher throughput and higher efficiency at the same time.

WINTRAY® was commercialized to obtain high capacity, high efficiency and fouling resistance in the liquid-liquid extraction. It has been already used in 19 commercial plants worldwide for various kinds of applications and conditions. The interfacial tension and density difference between heavy phase and light phase in commercial experiences cover the wide range of 1-35 mN/m and 20-600kg/m3, respectively. It means that WINTRAY® can be applied to various kinds of liquid-liquid extraction in industrial use. In addition, the problem of fouling has not been reported.

If WINTRAY® is applied for new construction of extraction column, the size of the column becomes compact because of its high throughput and high efficiency. High throughput makes the column diameter smaller, and high efficiency reduces number of trays and height of the column. In addition, as compared to extractors coming with driving device, the simple structure which consist of trays and weirs with openings, leads to low capital cost and maintenance cost.

When revamping the existing extraction columns, throughput can be increased only by replacing the internals with WINTRAY®. And also, the energy consumption in the solvent regeneration in distillation section can be saved by reducing the solvent circulation rate of the extraction column because of the high tray efficiency.

As an example of the performance of WINTRAY, the application to aromatic extraction column is described. In a commercial project, the perforated tray in the existing column was removed and WINTRAY® was installed in the aromatic extraction column uses sulfolane as a solvent. The number of trays and tray spacing were not changed after the replacement. After the modification, the amount of solvent is decreased 10% after installing WINTRAY® , and the BTX loss is reduced by 42% because of higher efficiency than the perforated tray, even though the capacity was increased 17%. In this project, the incensement of the capacity was limited because of the capacity of other facilities around the extraction column, and the actual capacity of WINTRAY® is higher than that. In the pilot test results, the throughput of WINTRAY® is approximately 40% higher than that of sieve tray.

In another commercial project, WINTRAY® was newly constructed in parallel with the existing RDC which is used for aromatic extraction. To reduce the aromatic concentration in the raffinate, the raffinate which contains less aromatic obtained from WINTRAY® , was mixed to the raffinate from the RDC and supplied to the downstream process. When using only RDC, the lower limit of the aromatic concentration in the raffinate is approximately 6%. On the other hand, it was reduced to 3% by parallel operation with WINTRAY® because of its high efficiency. In addition, even though the capacity per column cross-section area of WINTRAY® is double higher than that of the RDC, and the amount of solvent is decreased 20%, BTX loss is saved 70%. The height of the extraction part of the WINTRAY® is 15% lower than RDC. We herein report the characteristics and review example cases of the usage and the advantages of WINTRAY® in detail.

We also introduce further development to improve the throughput of the extraction column. The newly developed tray is composed of novelty shape plates and weirs with openings.

In addition to the introduction of performance improvement, the prediction method of the flooding velocity is also developed. The flooding velocity is a key factor for deciding the diameter of the extraction column in new construction project, and deciding the capacity in the internal replacement project. The liquid-liquid extraction is a versatile technology with wide range of applications. The feed and operation conditions vary widely, especially in refinery industry. Therefore, the accurate prediction of the flooding velocity is very important when the technology is applied to new application and new conditions. We introduce the comparisons between the experimental results and the results which are estimated by our method.

Gas Con Recovery and Stripping Issues at Turndown Conditions
In 2020 every refinery experienced rate reductions and changing economics. In the Marathon system every FCC unit was taken to minimum and the propylene...
Economic and Engineering Assessment of Combined Heat and Power Fuel Cell Systems Installed in Commercial Buildings
PNNL support of the DOE’s Fuel Cells Technology Office is to identify near term niche markets where fuel cells have potential , work with the DOE and...