The Combination of Data-Driven and Physics-Based Modeling with Application in Protein Formulations. | AIChE
Skip to main content

The Combination of Data-Driven and Physics-Based Modeling with Application in Protein Formulations. 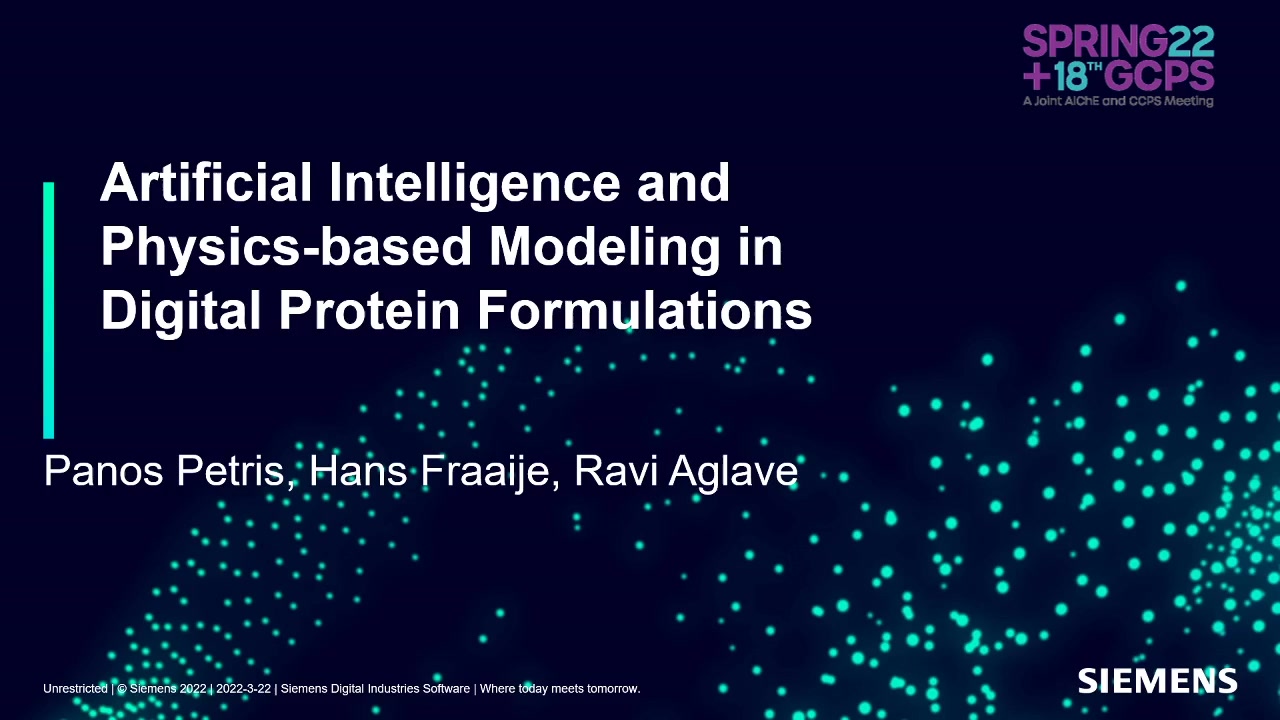 With the advent of the data revolution, new avenues open up to integrate data-driven and physics-based modeling. We discuss the application of such integration to protein formulations. One finds protein formulations in many industries: personal care, food, and drug discovery and development. It is estimated that currently, 20% of all new drug discovery is in biologicals. In all these systems, in one way or the other, the protein solution will go through a phase where the formulation is susceptible to instabilities, for example, when the concentration is relatively high or because of changing solvent conditions. Instabilities manifest themselves as aggregation, denaturation, or a combination thereof.

Until recently, a formulation scientist could do not much more than relying on experimental trial and error, perhaps assisted by robotic-assisted screening or ancient wisdom.

With a phenomenal technological advancement in AI-driven protein structure prediction by Googleâ€™s Deepmind (1,2) and similar academic AI initiatives (3), we now suddenly have the possibility to generate structures on a (multiple-)proteome-wide scale. Perhaps only a few of those structures will be of atomic accuracy; that is the resolution one needs for small molecules drug discovery. But for many a formulation challenge, one does not need atomistic resolution: a relatively rough 3D structure, organized on the level of groups of atoms (â€˜beadsâ€™) could be enough. However, there is one challenge: in the translation of structure to formulation, one needs both atomic positions (albeit rough) and thermodynamics interactions.

It is precisely on the level of overlaying the AI-generated rough structure with coarse-grained (CG) modeling that one can hybridize data-driven and physics-based modeling into a new AI-CG hybrid algorithm. The AI method is determined by statistics, whereas the coarse-grained modeling relies on physics.

We showcase the AI-CG algorithm by a few examples where we take protein structures generated by Deepmind and then coarse-grain the structures with Simcenter Culgiâ€™s Automated Fragmentation and Parameterization method. Once on the coarse-grained level, it is relatively easy to calculate, for example, the second virial coefficient or even to simulate the diffusion of a few coarse-grained protein molecules by Stokesian Particle Dynamics. The hybrid AI-CG algorithm takes only a few minutes, or at most a few hours, to execute on a modest PC., so still of sufficient efficiency for screening purposes.

Preview Presentation:
Presenter(s):
Ravindra Aglave
Once the content has been viewed and you have attested to it, you will be able to download and print a certificate for PDH credits. If you have already viewed this content, please click here to login.