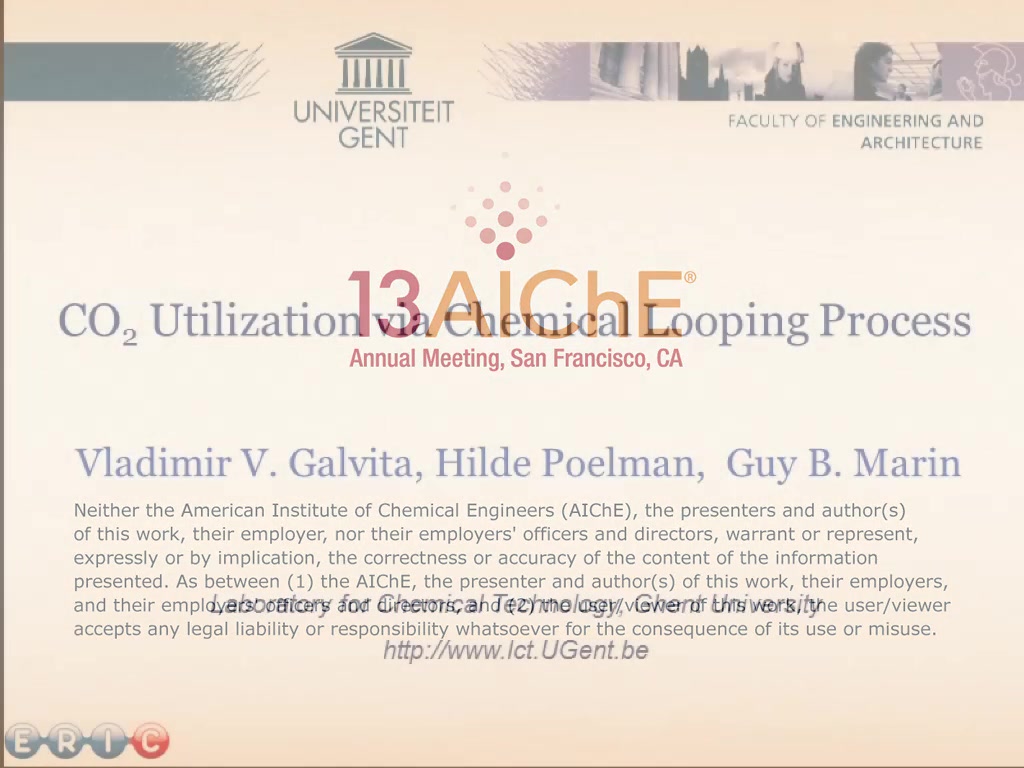 Chemical looping is one of several emerging technology options capable to reduce the carbon dioxide emissions and helping in a diverse range of applications for production of fuels , chemicals and electricity [1-3]. In a general chemical looping process , a metal oxide (MeO) is circulated between two reactors - the reducer and oxidizer. For a combustion process , MeO reacts in the reducer with the fuel to produce CO2 , H2O and leaving metal (Me) or metal oxide in reduced state [1]. In the oxidizer it is re-oxidized to its initial state with air. Thus , fuel and air never mix and CO2 is not diluted by nitrogen.

Other chemical looping schemes can produce hydrogen or synthesis gas. In chemical looping steam (CLSR) or dry reforming (CLDR) processes the fuel is again completely oxidized over the metal oxides (Eq. 1). The H2O or CO2 product is used as oxidant instead of air. The outlet from the looping reactor then consists of H2 or CO.

A key issue in CLDR processes is the selection of an appropriate oxygen carrier material. The reactivity of the oxygen storage material , its cost and thermal stability are critical selection criteria. A broad range of metals was analyzed to determine the thermodynamic equilibrium limitations for redox cyclic processes [4-7]. While a number of metals/metal oxides (Mo , Cr , Zn , Co , Nb , Ce) give reasonable CO2 reduction capacity , it is apparent that only iron yields high oxygen storage capacity from CO2 (0.7 mol CO2/ mol Fe) over a wide range of operating temperatures (600-1800°C).

Thus , the chemical looping conversion of CO2 into CO or CO2 and H2O mixture to syngas over iron oxide as oxygen storage material has been one of the possible target technologies for CO2 utilization. The ability of the oxygen storage material to maintain its high activity in repeated reduction/re-oxidation cycles is the most critical issue for the overall economic viability of the CO2 splitting process.

The objective of the present study is to investigate the CO2 re-oxidation efficiency of a series of CeO2-Fe2O3 mixed oxides prepared by co-precipitation for the utilization of CO2 in a chemical looping process. Experimental performance data are reported as well as structural characterization of the oxygen storage materials during reduction and CO2 re-oxidation. In addition , the stability of performance was tested through prolonged use of the material.

Mixed CeO2-Fe2O3 materials with 0 , 20 , 50 ,70 , 90 and 100 wt% CeO2 were prepared for CO2 transformation to CO by means of chemical looping. The samples were characterized with HRTEM , EDX , SAED , EEL and in situ XRD and tested in cycled reactions for activity and stability. The generation of CO from CO2 through H2-CO2 redox cycles was investigated at 600oC to evaluate the effect of CeO2 upon Fe2O3. Two different phases were observed in the CeO2-Fe2O3 samples. For a CeO2 content below 70wt% , a distinct Fe2O3 phase was always present. The second phase appeared in all mixed CeO2-Fe2O3 samples and was identified as a nano-crystalline solid solution of iron in ceria with 20 nm crystallite size and an atomic ratio of Fe:Ce up to 1:5. In all mixed CeO2-Fe2O3 samples , the solid solution crystallite size was considerably smaller compared to pure ceria , while a size decrease for Fe2O3 was noticed with increasing CeO2 loading. The crystallographic structure of all CeO2-Fe2O3 was studied under H2 reduction and CO2 oxidation , using time-resolved in situ X-ray diffraction. In a 90wt% CeO2 sample , no iron related diffractions were present at the start , but the H2-TPR treatment made Fe appear as phase segregating from ceria. For lower CeO2 loadings , H2-TPR reduced the separate Fe2O3 phase to Fe3O4 , FeO and Fe. The solid solution phase was always partially reduced. In CO2-TPO , re-oxidation of iron followed a one-step pathway to Fe3O4 around 500oC , while for the solid solution re-oxidation occurred at 450°C. The addition of CeO2 to Fe2O3 had a beneficial effect upon the activity and stability of the material. Reduction-re-oxidation cycles could be repeated many times without significant loss of CO2 conversion efficiency.

The activity and stability of the mixed CeO2-Fe2O3 samples as compared to pure Fe2O3 and CeO2 a test reaction with H2 reduction and CO2 re-oxidation was set up. The samples are reduced in 5%H2 in Ar during 1 min. By contacting the reduced sample with CO2 , CO is produced. As an example , the observed space time yield of CO as a function of time for 20wt% CeO2- Fe2O3 during the 2nd , 5th and 10th cycle is displayed in Fig. 1a.

Fig. 1b shows the amount of produced CO after the 1st and 10th redox cycle for samples 0 to 100wt%CeO2-Fe2O3. In both cycles , the product yield is higher for mixed materials than for pure ones. Especially the samples 20 to 70wt% CeO2-Fe2O3 produce over 5 times more CO than Fe2O3 , with the highest yield for 20 wt%CeO2-Fe2O3. The amount of CO produced over CeO2 was 10 times lower than for Fe2O3. Highest CO yield was obtained for 20wt% CeO2-Fe2O3 , while 70 and 50wt% CeO2-Fe2O3 were the most stable combinations. The addition of ceria to Fe2O3 thus formed a solid solution phase , yielding improved activity. Moreover , the combination of both oxides efficiently suppressed the sintering effect , resulting in improved stability in chemical looping processes.

Preview Presentation:
Presenter(s):
Vladimir V. Galvita
Once the content has been viewed and you have attested to it, you will be able to download and print a certificate for PDH credits. If you have already viewed this content, please click here to login.