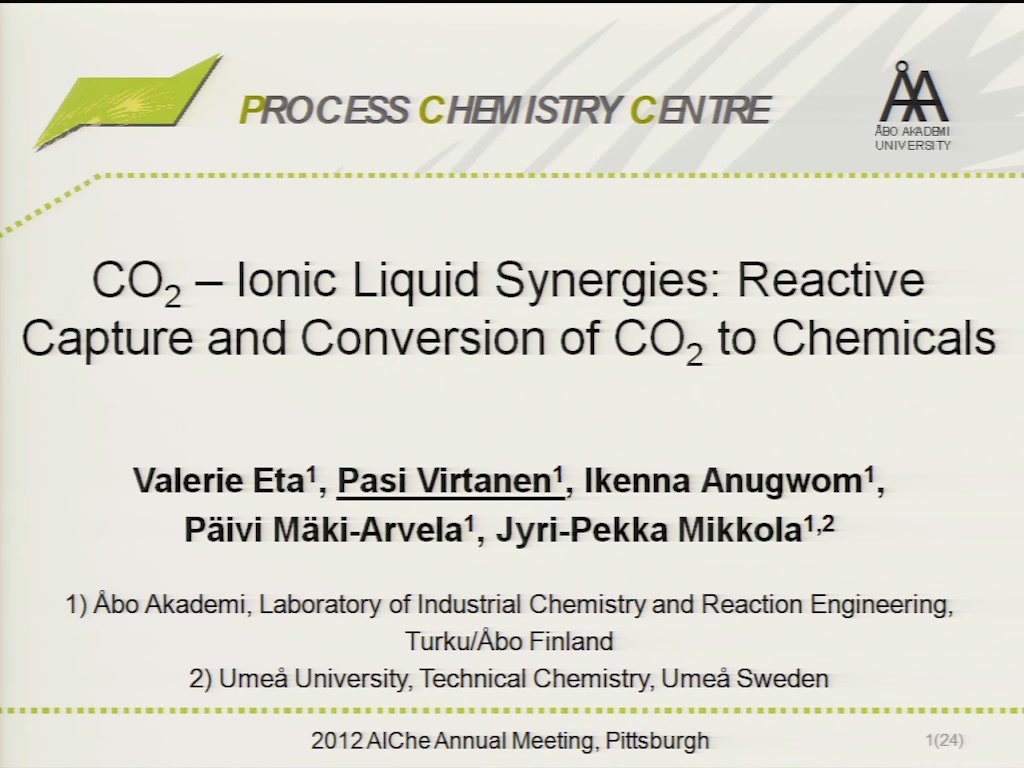 Novel technologies based on the utilization of abundant and non-toxic carbon dioxide (CO2) for the synthesis of materials and chemicals may significantly contribute towards the development of sustainable industrial practices. Naturally, myriad substances are synthesized from CO2 and consumed by humans. The conversion of CO2 to fuels and chemicals is an attractive method of utilizing CO2 from the viewpoint of green chemistry and sustainable development. The use of CO2 in the synthesis of chemicals such as dimethyl carbonate (DMC) or switchable ionic liquids (SILs) constitutes an environmentally attractive alternative to hazardous and toxic reagent, and resulting in waste minimisation. DMC exhibits versatile physical and chemical properties, such as low toxicity and excellent biodegradability and thus, is an environmentally benign building block for other chemicals.

In the present study, i) DMC was synthesised from CO2 and methanol, and ii) CO2 was used as feedstock for the synthesis of switchable ionic liquids (SILs) where the entire ?COO? moiety is maintained.

= +26.3 kJ/mol). Alkoxide ionic liquids possessing alkylimidazolium and benzalalkonium cations were prepared, characterised and tested together with ZrO2-MgO catalyst for the synthesis of DMC from methanol and CO2. By using the novel ionic liquid as additives, ca 12 % conversion of methanol, and 90 % selectivity to DMC was obtained at 120 °C and 7.5 MPa [1]. The water abstracting potential of the ionic liquids influenced the conversion of methanol and the selectivity to DMC. The alkoxide ionic liquids were recovered and reused in DMC synthesis without loss in activity and selectivity.


Switchable ionic liquids are compounds which can be switched from molecular compounds to ionic liquid by bubbling acid gas, such as CO2, through the liquid. The formed ionic liquid can be switched back to molecular building blocks - and CO2 will be released - by bubbling an inert gas, such as N2, through the liquid or applying vacuum. Novel SILs containing 1,8-diazabicyclo-[5.4.0]-undec-7-ene (DBU), glycerol and CO2 were synthesized, characterized and tested for the selective fractionation of lignocellulosic materials. The structures of the synthesized SILs were confirmed by NMR and FTIR.  The results showed that carbonate containing ionic liquid was thermally stable up to 120 °C and was capable of selectively fractionate birch chips at 100 °C in a batch reactor (Fig. 1). FTIR spectra indicated that DBU was protonated via formation of N?H and C=NH+ bands. Furthermore, deprotonation of glycerol was confirmed by FTIR. NMR spectra of the SIL showed the formation of glyceryl carbonate [2]. As such, the challenges associated with the use of ionic liquid, such as the high costs and the risk assessment of the complete life cycle of ionic liquids could be minimized by using cheap and less toxic SILs.

Preview Presentation:
Presenter(s):
Pasi Virtanen
Once the content has been viewed and you have attested to it, you will be able to download and print a certificate for PDH credits. If you have already viewed this content, please click here to login.

Real Time Detection of Gaseous Metal Contaminants in Coal Flue and Fuel Gas
The Integrated Gasification Combined Cycle (IGCC) is a promising technology for the future use of coal to provide energy. During this process, many of the...
Determination of the Active Sites over Rh Substituted Pyrochlores for Dry Reforming of Methane
Dry reforming of methane (DRM) to syngas (H 2 and CO) has been well-studied over a number of catalysts. The high temperatures needed to produce syngas...