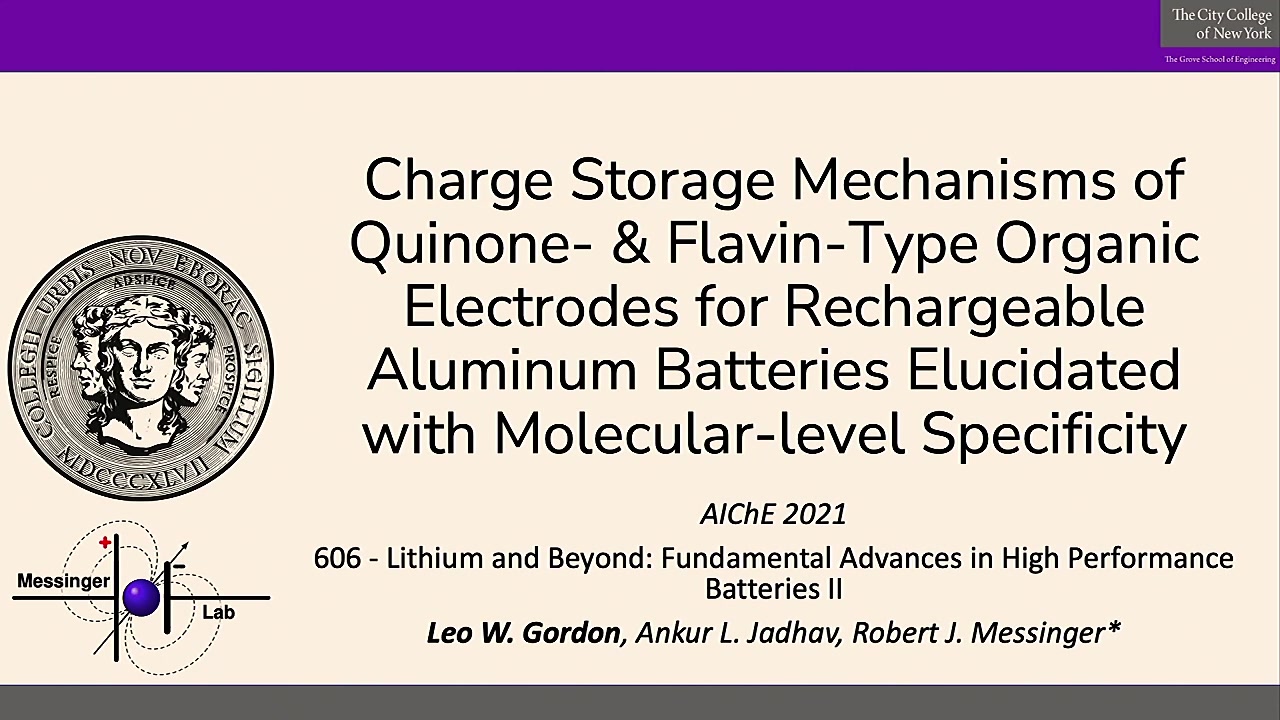 Rechargeable aluminum batteries are an emerging electrochemical energy storage technology that takes advantage of the high energy density and safety of aluminum metal. Aluminum is also the most abundant metal in the earthâ€™s crust (8.23 wt.%) and has mature infrastructure for processing, refinement, and recycling, leading to its low cost. However, there is a scarcity of positive electrode materials that are both energy-dense and compatible with the commonly used Lewis acidic chloroaluminate ionic-liquid electrolytes. Organic electrodes have garnered recent interest due to their highly tunable properties, diverse charge storage mechanisms, and (electro)chemical stability. They can be derived from natural sources, complementing aluminum metal in that both are earth-abundant electrode materials with few geopolitical constraints, unlike lithium and cobalt. Thus far only a handful of studies exist that investigate Al-organic systems, while none so far have undergone an experimental, mechanistic study of both the nature of the electroactive ions and how they complex to the organic frameworks.

Here, we investigate the charge-storage mechanisms of quinone- and flavin-type organic cathodes up from the atomic scale by using multi-dimensional solid-state NMR (ssNMR) spectroscopy in conjunction with electrochemical measurements and quantum chemical calculations. In particular, ssNMR techniques were employed that use through-space dipole-dipole interactions as filters to establish molecular-level proximities (<1 nm). For example, 2D 27Al{1H} dipolar-mediated NMR techniques establish interactions between polyatomic aluminum-containing ions and specific moieties of the organic electrode framework. Such measurements, which are sensitive to molecular dynamics in addition to internuclear distances, enable us to analyze the electrodes without perturbing them by washing with solvents, as the signals from mobile electrolyte species are efficiently filtered out. Indanthrone quinone (INDQ) is investigated for the first time, which is shown to have capacities of up to 240 mA h g-1 as well as capacities >100 mA h g-1 at rates up to 2400 mA g-1. Through dipolar-mediated ssNMR techniques, it was determined that INDQ complexes polyatomic AlCl2+ cations across two distinct quinone sites, which undergo enolization reactions. The resulting negatively charged oxygen coordinates the aluminum-containing cations tetrahedrally, a finding which is corroborated via density functional theory (DFT) calculations. This charge storage mechanism will be briefly compared to that of a flavin-type organic electrode, elucidated using a similar approach. Such investigations of organic electrodes at the molecular scale develop a basis for generating future â€˜designerâ€™ electrode materials for use in aluminum battery systems.

Preview Presentation:
Presenter(s):
Leo Gordon
Ankur L. Jadhav
Robert Messinger
Once the content has been viewed and you have attested to it, you will be able to download and print a certificate for PDH credits. If you have already viewed this content, please click here to login.

Marcellus Shale Gas Wastewater Reuse and Recycle
This webinar provides background on how water is used for drilling and hydraulic fracturing and includes a review of hydraulic fracturing fluid composition and...
Kinetic Model for Hydrodeoxygenation Reaction of M-Cresol On Alumina-Supported Pt Catalyst
Variety of oxygenated compounds are detected in the pyrolysis oils, which leads to a number of associated problems such as low stability and reduced heating...