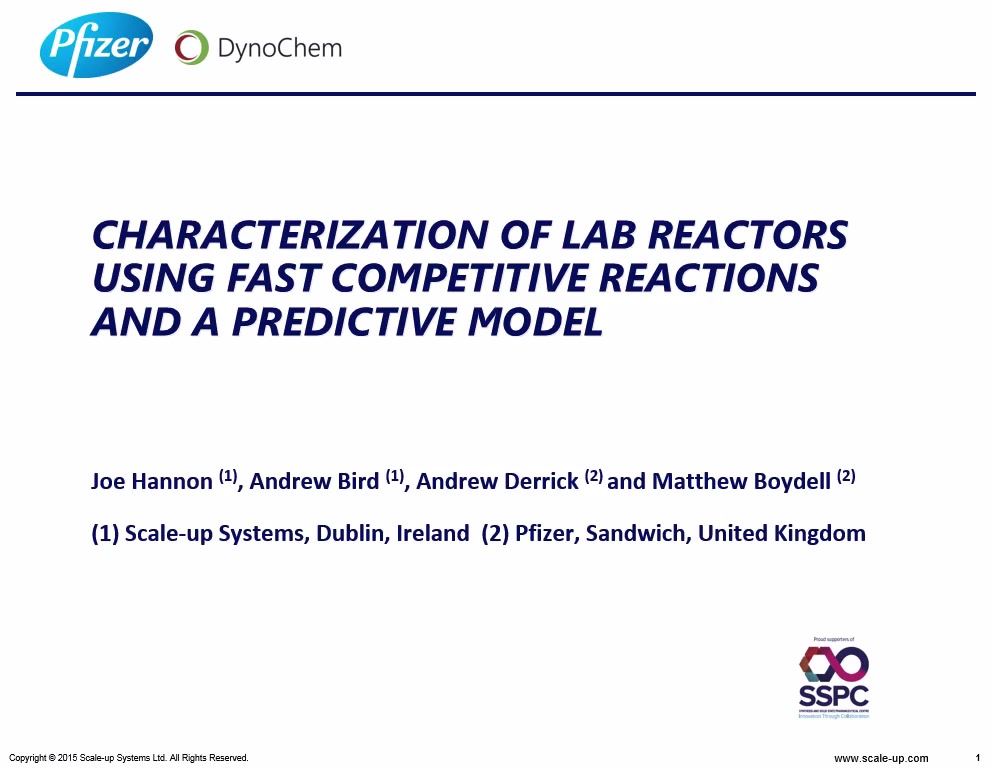 Scale-up of reaction and crystallization conditions often involves assumptions about equivalence of mixing between lab and plant.  Scale-down of process for lab studies requires similar assumptions.  A question that often arises is how small can the lab equipment be, so that the results translate to scale.  With modern lab synthesis workstations providing good control of addition rates and temperature in reactors that resemble their larger scale equivalents, scale-up and scale-down work sometimes takes place in lab systems with volumes as low as 100 mL.  It is possible using mixing-sensitive test reactions to quantify the mixing environment in vessels at any scale and to thereby identify lab and plant conditions that are more quantitatively equivalent.

The fast competitive reaction system involving neutralization and ester hydrolysis (a so-called ‘Bourne Reaction’, ref 1) has been used to study mixing characteristics in several common lab reactors used for routine development of chemical processes.  The final product distribution after running the reaction in fed batch mode reflects the history of relative mixing and reaction rates in the plume or reaction zone that forms near the feed location.

Most previous applications of this technique have been in larger vessels where a critical feed time can be identified and longer feed times represent micromixing-controlled conditions.  It is possible using a predictive model containing both kinetics and mixing parameters to estimate the product distribution as a function of feed time and mixing energy dissipation rate.  This latter parameter, often referred to as epsilon, with units of W/kg, is of interest for a wide range of mixing phenomena.  Using the predictive model together with measured product distribution, it is possible to estimate the corresponding epsilon.  This represents a useful level of vessel characterization, in addition to the more widely known heat and mass transfer characteristics (UA and kLa).

We will present and discuss results for different reactors and operating conditions and also how best to use predictive models to design and analyse the experiments, which require a good dynamic range of selectivity to be informative.  We will compare mixing performance at operating conditions that are commonly used in the lab and plant.  Finally, we will deduce some guidelines towards obtaining equivalent mixing between lab and plant reactors.

Preview Presentation:
Presenter(s):
Joe Hannon
Once the content has been viewed and you have attested to it, you will be able to download and print a certificate for PDH credits. If you have already viewed this content, please click here to login.