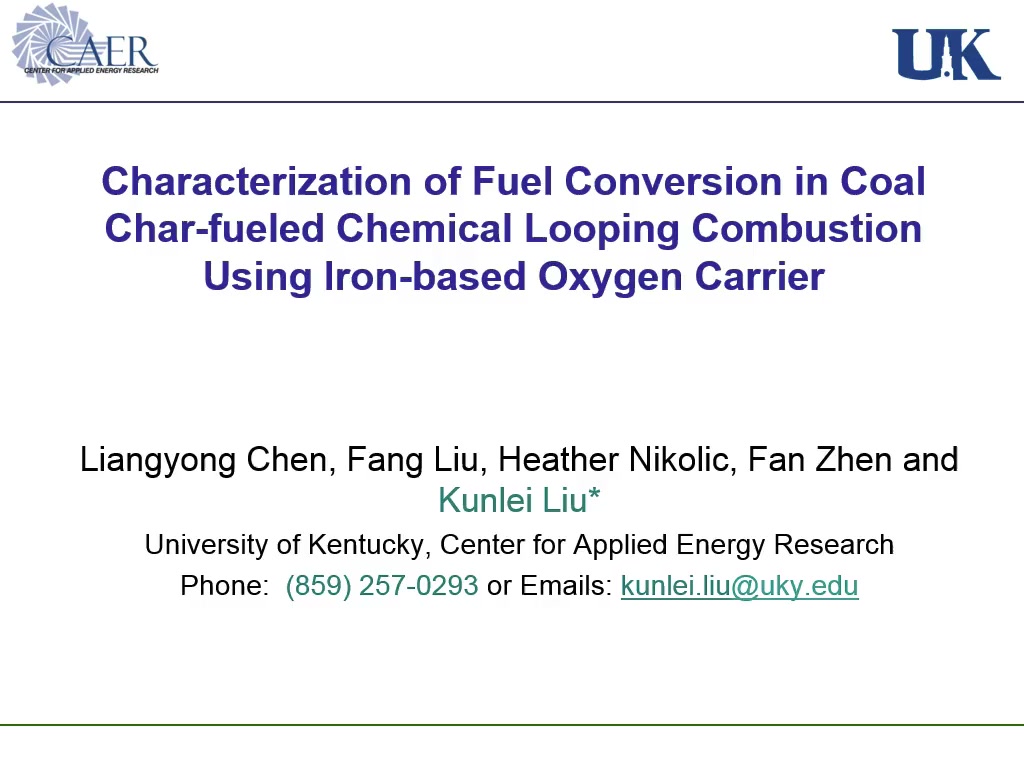 Chemical looping combustion (CLC) for power generation has the inherent potential of enriching CO2 from flue gases with low energy penalty compared to other commercial available options. CLC process usually includes two reactors, an air and fuel reactor. Metal-based cycling material (named oxygen carrier, OC) is used to transport oxygen from air reactor to fuel reactor where the fuel were burned via reduction of oxygen carrier, and thus ASU (Air Separation Unit) process is vitally avoided.  When the application of CLC to solid fuel, solid fuel would indirectly reacts with oxygen carrier via steam or CO2gasification. The fuel conversion in the fuel reactor would involve more reactions than a gas fueled CLC- coal char gasification to produce syngas and the intermediate syngas combustion with oxygen provided by the cycling materials. However, the overall reaction rate and the performance of solid-fueled CLC process are limited by fuel conversion. The purpose of this study is to characterize the char gasification and intermediate syngas conversion in char-fueled CLC process and to try to address the efficient pathway for improvement.

A series of experiments were performance on a bench-scale fluidized bed reactor to investigate solid-fueled CLC. Steam and iron-based cycling materials prepared from industrial solid waste were used as gasification agent and oxygen donator respectively.

The first batch of experiments were carried out to identify the rate-limiting step as well as the potential of improvement in the overall reaction taking place in the fuel reactor. Five different experiments were carried out on the fluidized bed reactor, including (1) coal char combustion; (2) coal char pyrolysis; (3) steam-char gasification with quartz sands as bed materials; (4) coal char fueled CLC with iron-based materials as OCs, (5) solid-solid reaction among coal char and OC, and (6) OC reduction with 20 vol% CO.  It is confirmed the in-situ gasification reaction of coal char is the dominant, time-limiting factor in CLC, but in CLC process the iron-based OC can quickly remove the syngas from char gasification and shows the potential to promote the overall reaction rate of solid fueled CLC to the same level of char combustion if in-situ gasification is not the rate-limiting step.

The second batch of experiments was a parametric study. The effects of volume concentration of gasification agent, operation temperature, different coal char and fuel char/OC ratio were extensively investigated. For comparison, steam-char gasification operated under the same conditions was investigated and the resulting carbon conversion rate was used as a baseline to evaluate the performance of CLC.

This study also tries to obtain kinetics of the coal char gasification in CLC (still ongoing).  Because the oxygen carrier affects the local concentration of reactant and product gas, and the structure of a fuel char particle will change with conversion, the initial rate of gasification will be derived for kinetic study.

Preview Presentation:
Presenter(s):
Liangyong Chen
Once the content has been viewed and you have attested to it, you will be able to download and print a certificate for PDH credits. If you have already viewed this content, please click here to login.