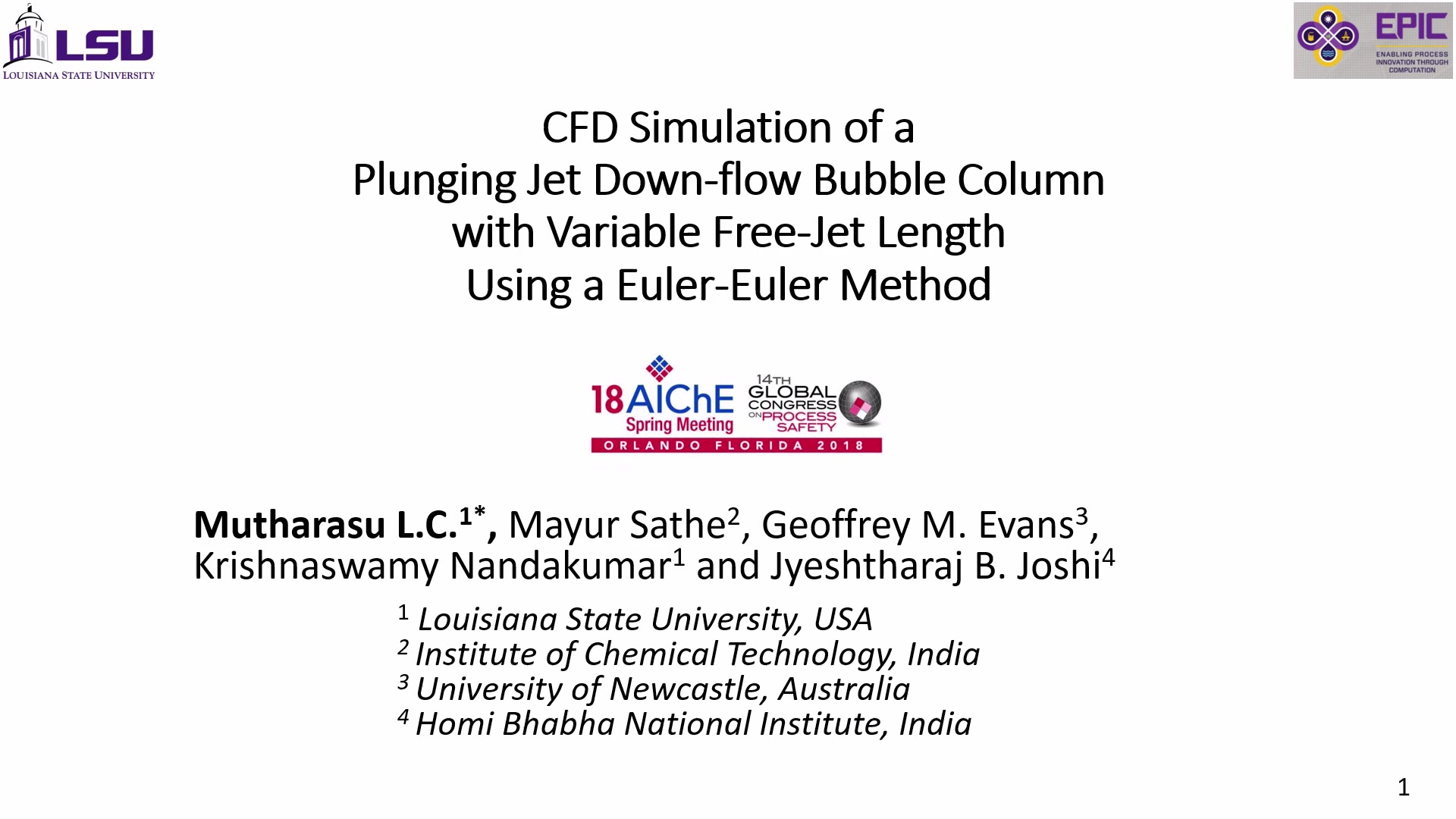 The key feature of a plunging jet
down-flow bubble column is a plunging liquid jet that is used to entrain the
inlet gas in a column of liquid. Experimental characterization of the plunging
jet and the subsequent gas entrainment has been studied extensively and the
physics is quite well understood [1,2]. But still the
successful CFD simulation of:

2)
the associated gas entrainment in the
mixing zone and

3)
the resultant two-phase bubbly
dispersion flow in the downstream section;

Capturing
all these three phenomena in a single simulation still remains a challenge.
Figure 1 shows the three distinct zones in the column where the above three
phenomena occur respectively. The existing high resolution CFD models like the
Volume Of Fluid (VOF) method and Front-tracking method have been successfully
employed to capture the phenomena occurring above and below the free-liquid
surface [3–5], but they are limited in application for cases where the
entrained gas bubbles are of few mm size, and not suitable/practical for
capturing the entrainment and dispersion of micro-bubbles. And further, as
their computational requirement is very high, these models are not suitable for
full-reactor scale simulations. On the other hand the low resolution model like
Eluer-Euler model has been successfully employed to
capture only the phenomena occurring below the free surface by applying a
two-phase bubbly flow inlet with pre-determined jet-velocity profile from the
free surface of the liquid pool [6–8]. This approach works fine only for cases
were the tank or container cross-sectional area is sufficiently large and the
free surface sloshing can be neglected.

In the presented work a sigmoid
function based drag modification is used in a 3D Euler-Euler framework to
capture both the complex gas entrainment process and also the two-phase
gas-liquid bubbly flow in a single simulation. Equation 2 shows the formulation
of the drag-modification function used, and Figure 2 shows the variation of the
drag-modification factor as a function of the local gas holdup.

Figure 3 shows the mesh used for
the CFD simulations. The successful implementation of the drag modification
enabled the CFD simulations to reproduce the experimentally observed free jet
lengths and the gas holdup in the two phase gas-liquid bubbly-flow section of
the column. Figure 4 shows the comparison of the free-jet lengths obtained from
CFD with the experimental data for the 14 different operating conditions
considered. Figure 5 shows the difference in the transient evolution of the
free-jet length with and without Drag-modification implementation, for one
particular operating condition of VL=  VG
= 29.39 mm/s . Figure 5 clearly highlights the need for implementing the
drag-modification, without which the CFD simulations are not able to capture
the entrainment of the gas-phase into the liquid phase by the plunging liquid
jet. Further, the high-resolution turbulence and holdup data obtained from the
3D CFD simulations for the different operating conditions were utilized to
perform a linear stability analysis as derived by Ghatage
et al. [9]. The results from the CFD simulations were key to calculating the
stability parameter K3used in the linear
stability analysis of Ghatage et al. The parameter K3
is in turn a function of the turbulent kinetic energy (k) at the
mixing-zone exit (Equation 3), so CFD is required for both locating the
mixing-zone exit (form axial profiles of turbulent kinetic energy) and also for
evaluating the value of K3.

This value of K3serves as an input to the stability analysis, which in turn determines
the critical gas holdup at which the regime transition from the homogeneous
regime to the heterogeneous regime takes place. The prediction of this critical
holdup at which the regime transition occurs is crucial for the design and
scale-up of bubble column reactors.

Figure
2: Variation of the Drag modification function as a function of the local gas
hold-up.

Figure
4: Comparison of the Free jet lengths obtained from
the CFD simulations with the Experimentally observed values.

Preview Presentation:
Presenter(s):
Mutharasu LC
Once the content has been viewed and you have attested to it, you will be able to download and print a certificate for PDH credits. If you have already viewed this content, please click here to login.

Simulation-driven Engineering for the Modern Chemical Engineer
Chemical plants are more complex and more integrated than ever. New products have to come to market more quickly. Engineering managers must onboard a new...
Surrogate-Based Process Modeling Optimization: Application to Modular Carbon Capture System Via Vacuum Pressure Swing Adsorption
Post-combustion carbon capture has been proposed as a way to combat climate change and reduce carbon emission. There currently exist different technologies for...