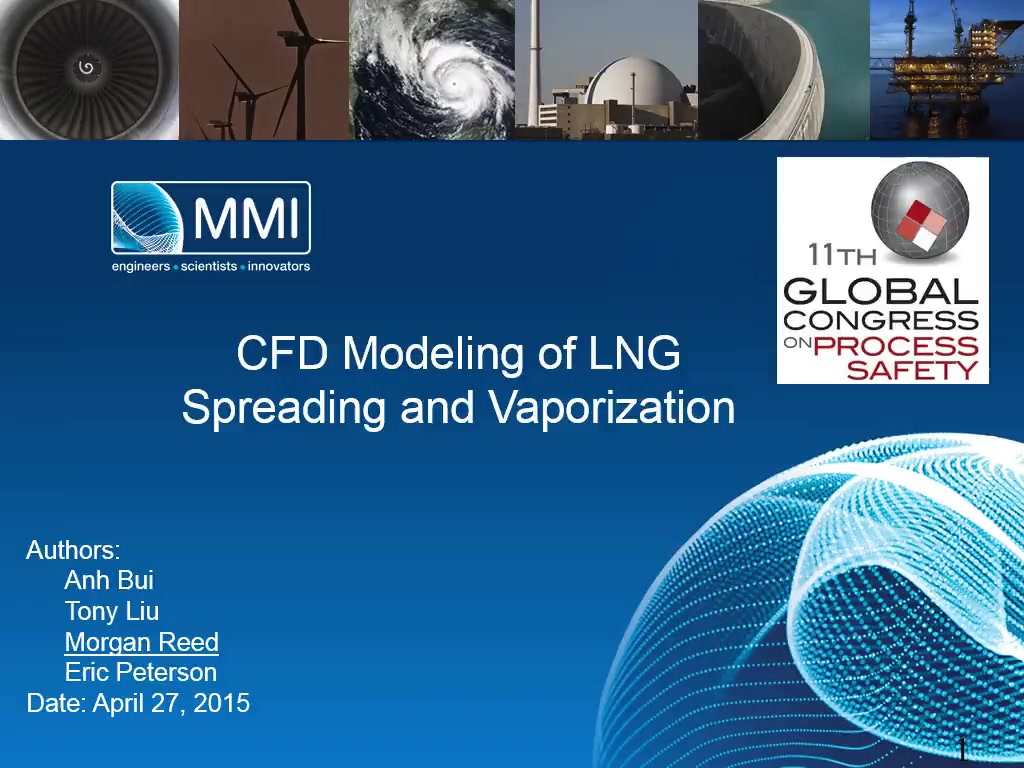 LNG release, spreading and vaporization lead to the formation of a flammable vapor cloud with high VCE risk. NFPA 59A Standard for the Production, Storage and Handling of Liquefied Natural Gas, requires that the periphery of a vapor cloud (where fuel gas concentration becomes 50% of LFL) formed as a result of LNG release be within the property lines of LNG facilities.

Many factors are found to affect LNG spreading and vapor cloud formation/dispersion, i.e. LNG properties (mixture composition, temperature, pressure); release volume, location and rate; spreading terrain (on land or on water); the dynamics of vaporization process; atmospheric and wind conditions. Given the intensive heat transfer between cryogenic LNG and surrounding environment, rapid vaporization is a major factor determining the extent of LNG spreading in the form of a liquid pool. Vaporization occurs on the contact of low-temperature LNG with land/solid surface or water. Nucleate or film boiling may happen depending on the temperature difference between the contacting materials and the characteristics of the contact surface, which can also affect LNG spreading. Film boiling, for instance, involves a formation of a thin layer of vapor separating LNG from the surface, thus significantly reducing friction for the flow. Change of LNG composition and properties due to vaporization also occurs, affecting the LNG spreading.

Modeling LNG spreading and all involved complex physical phenomena is a difficult task. Integral models, such as SOURCE5 and PHAST, consider a circular pool characterized by a common set of pool parameters, i.e. temperature, thickness, vaporization rate, etc. Spatial variations of pool geometrical and thermo-dynamical parameters can be accounted for in more complex models such as FLACS, which is based on shallow water theory. Advanced CFD models employing different methods for free-surface capturing are also used for LNG spreading description. Such models usually require a fine mesh to resolve the increasingly thinning layer of LNG when it spreads further away from the release location. Moreover, many physical phenomena involved, such as boiling on the contact surface, conjugate heat transfer between LNG and surrounding environment, flow regime change in the gas/liquid mixture, need to be approximately modeled with use of various closure models, leading to considerable uncertainty in the spreading predictions.

In this study, a model of LNG pool spreading is developed based on the Smoothed Particle Hydrodynamics (SPH) method. The use of such a particle method will allow a less expensive (compared to ordinary CFD) modeling of gravity-driven propagation of fluid over complex terrain surfaces. The LNG pool spreading model is coupled with a CFD (OpenFOAM) atmospheric gas dispersion model for a full description of a LNG loss-of-containment incident. The proposed model is to be validated against available experimental data and other code predictions.

Preview Presentation:
Presenter(s):
Anh Bui
Once the content has been viewed and you have attested to it, you will be able to download and print a certificate for PDH credits. If you have already viewed this content, please click here to login.