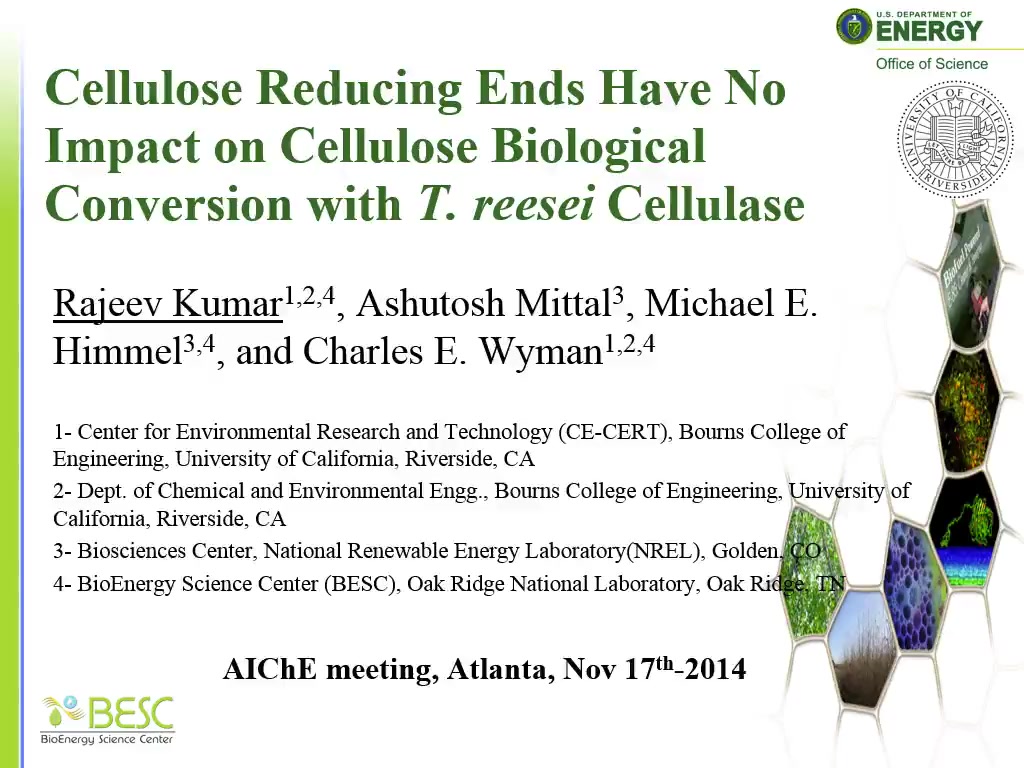 Trichoderma reesei derived cellulase cocktail is comprised of several cellobiohydrolases (Cel 7A or CBH I; Cel6A or CBH II) and endoglucanases (EG I through V). Earlier studies showed that the two cellobiohydrolases CBH I and CBH II act preferably from the reducing and non-reducing ends of cellulose, respectively.  Thus, it has long been believed that cellulose reducing ends (REs) play a vital role in cellulose enzymatic hydrolysis mediated by fungal enzymes 1,2. However, the fundamental hydrolysis studies investigating the effect of REs were mostly conducted with soluble cellodextrins, and studies applying insoluble substrate are limited. In one such report, Xu et al. recently reported that oxidation of REs and primary hydroxyl groups (PHGs) significantly affected cellulose conversion 3. However, the quantification of cellulose REs following oxidation were not reported in this study. On the contrary, a few other studies reported a limited effect of REs on cellulose conversion 4. Therefore, in this study, the role of REs in insoluble cellulose recalcitrance to biological conversion with T.ressei derived enzymes was investigated. Pure cellulose compounds were subjected to sodium borohydride (NaBH4) reduction and sodium chlorite-acetic acid (SC/AA) and bicinchoninic acid (BCA) oxidation to block the REs. NaBH4and SC/AA treatments were able to block more than 95% and 60% of the REs, respectively, than untreated controls, while BCA applied for various cycles oxidized cellulose to various extents. X-ray diffractograms of the treated solids showed that these treatments did not change the cellulose crystalline structure, and crystallinity index determined by Segal’s and amorphous subtraction methods was unchanged. Enzymatic hydrolysis of resulting solids with complete cellulase system at protein loadings as low as 0.5 mg/g glucan revealed that cellulose REs did not affect initial or final cellulose conversion. Furthermore, in contrast to what is traditionally believed, blocking cellulose REs had no impact on cellulose conversion with purified cellulase components (CBH I, CBH II, and EG I) and did not affect their synergy. On the other hand, oxidation of the PHGs significantly affected cellulose digestibility, with the adverse effect was more prominent at low cellulase loadings.

Preview Presentation:
Presenter(s):
Rajeev Kumar
Once the content has been viewed and you have attested to it, you will be able to download and print a certificate for PDH credits. If you have already viewed this content, please click here to login.