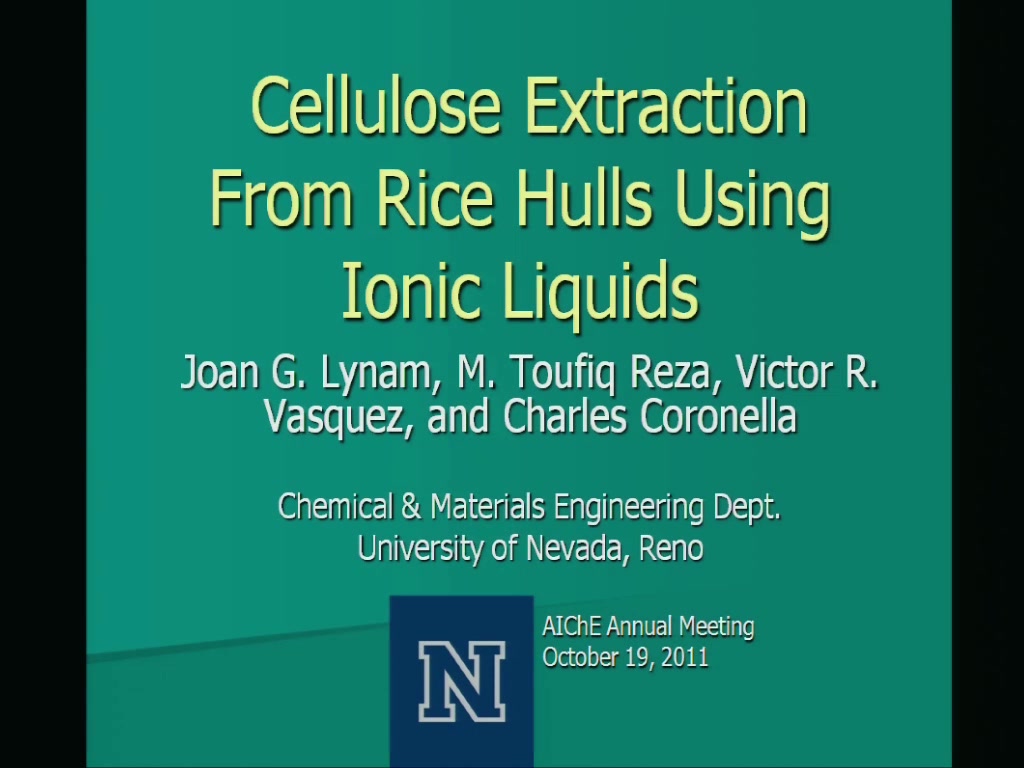 
Over one fifth of calories consumed by humanity are from rice.  Consequently,  vast quantities of rice hulls are disposed of as waste, since the hull constitutes 20% of rice mass. Standard practice for disposal of rice hulls is burning, generating pollution and CO2, or thrown away in vast quantities. An alternative would be to extract cellulose from rice hulls them using a low temperature, environmentally safe process.   Removing cellulose for other uses, such as conversion to glucose and then fermentation to bio-ethanol or use in polymers, would be a better solution to this problem. In addition, this pretreatment process could render the rice hull residue into a biomass readily accessible for enzymatic hydrolysis, so even more cellulose could be converted to glucose for biofuels use.  Hemicellulose or pretreated biomass high in hemicellulose can also be used for enzymatic hydrolysis and fermentation to biofuels.

Ionic liquids are basically molten salts with a melting point at least below 100 °C and generally below room temperature.  Ionic liquids have been found which dissolve isolated lignin and cellulose, and which dissolve these components in wood powder. However, the dissolution capability of these solvents has not been determined for rice hulls. Also, when ionic liquids are applied to biomass, the behavior of hemicellulose has not been well characterized.

Preview Presentation:
Presenter(s):
Charles J. Coronella
Once the content has been viewed and you have attested to it, you will be able to download and print a certificate for PDH credits. If you have already viewed this content, please click here to login.

Bio-Oil Streams in the Current Fast Pyrolysis - Catalytic Upgrading Route of Producing Renewable Liquid Fuel from Biomass
One of the main aims of the multi-year program plan of the DOE’s Bioenergy Technologies Office (BETO) is the production of liquid transportation fuels from...
Biogas Production Trend at Various Temperature Conditions and Methane Enrichment Using Solvent Absorption Method
Depletion of the fossil fuels and their prices are going up therefore it is the need of the hour to find out alternative renewable energy resources. At the...