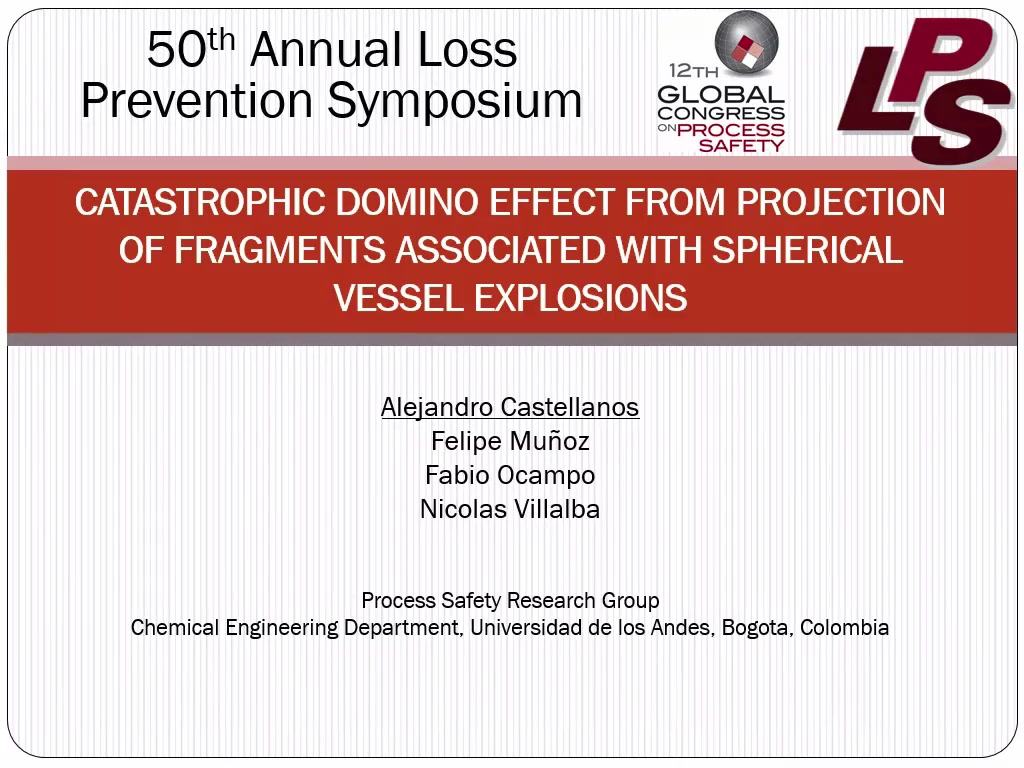 The domino effect related to the projection of fragments in an industrial environment occurs when an element of a system, such as a chemical vessel, undergoes catastrophic fragmentation as the result of an explosion. The high-velocity fragments then impact and damage neighboring systems, which then leads to other dangerous scenarios such as loss of containment, fires or even other explosions. Of all industrial accident scenarios, those involving throwing of fragments have the greatest range from the accident point, well over 1 km. This process has been seen in several major accidents worldwide. In this work, this domino effect scenario was modeled in three steps: fragment formation, flight path and fragment impact damage. In the first step, fragmentation patterns were studied using numerical simulations; for this, the inner explosions of 100 stainless steel 304 vessels, whit spherical geometry and diameters between 1 m and 20 m, were simulated with the software of material dynamics modeling ANSYS-AUTODYN. In this step, the burst pressure of each vessel was estimated with Svenneson’s equations, likewise, using Baum’s equations the explosion energy was calculated; with this information, the explosion was modeled with an equivalent quantity of TNT. The detonation was simulated using Eulerian grids and the vessels were meshed with a 3D Lagrangian grid. In addition, Mott’s stochastic fragmentation model was implemented in order to simulate a material with heterogeneous microstructure. The probability density functions of mass, velocity, size and number of fragments were obtained as a result of this step, these data were used as input in the second step, flight path. In this step, 3D kinematics equations were employed to calculate the fragments paths during their flight and the feasible impact regions taking into account aerodynamic characteristics such as drag and lift coefficients. Additionally, the impact probability was estimated for different targets (cylindrical and spherical tanks of several sizes) located at multiple points in a range of 5 km from the explosion. Finally, in the step of fragment impact damage, Monte Carlo simulations were implemented using an analytic impact model in order to estimate the damage probability due to one or more fragments impact a target, considering three scenarios: perforation, embedment and ricochet. The mass and velocity of fragments as well as their angles of attack were used as a random variables. The results of this work could be used in industrial risk assessment methods so that plant construction or plant modification can be designed in order to minimize the effects of fragments impact inside the plant, in surrounding communities and in the environment.

Preview Presentation:
Presenter(s):
Alejandro Castellanos
Once the content has been viewed and you have attested to it, you will be able to download and print a certificate for PDH credits. If you have already viewed this content, please click here to login.

Petrobras Process Safety Key Performance Indicators Wells and Drilling Activities
An essential element of any improvement program is the measure of existing performance needs, as well as identification of new and future needs. This paper...
Objective Analysis of PSM Audit Data
In developing systems for Process Safety Management, compliance audits are integral with verification that practices and procedures are developed and are...