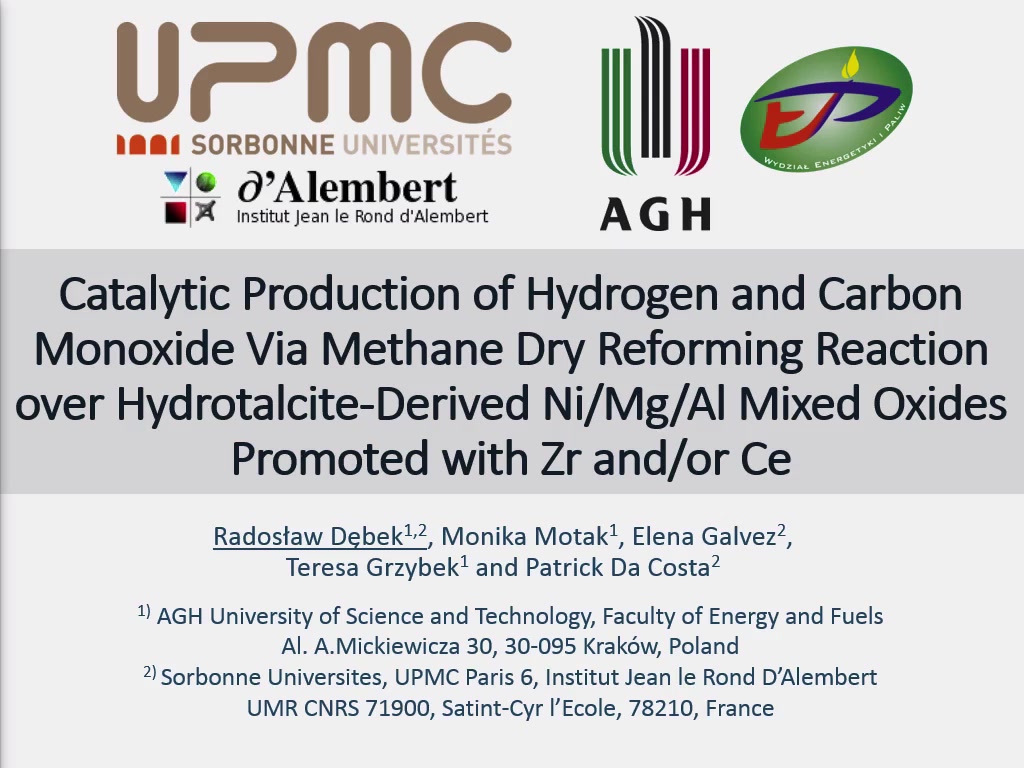 The reaction of dry reforming of methane (DRM) might become of a great importance in the near future since it is a method of CO2 utilization, which allows to highly valorize natural gas and biogas [1]. The commercialization of the DRM process is dependent on the offer of new stable and active catalysts. The nickel-based catalysts are commonly used in DRM reaction as they are effective in hydrogen production and nickel is a much cheaper material than noble metals. However, Ni-based catalysts undergo fast deactivation due to the formation of coke deposits on the catalysts surface via direct methane decomposition and Boudouard reactions [2]. The stability of nickel catalyst in DRM reaction may be enhanced by introduction of support or promoters with basic and/or redox properties [1]. Thus in this work the hydrotalcite-derived mixed oxides modified with Ce or Zr species were tested in DRM reaction.

The starting materials – hydrotalcites were synthesized by the co-precipitation method at constant pH from the aqueous solution of metal nitrates (Mg/Ni=3, M2+/M3+=3). In this way H-Ni sample was prepared. Zirconium was introduced into the brucite-like layers at the co-precipitation stage (Al3+/Zr4+=9/1), resulting in H-NiZr sample [3]. Cerium species were introduced into the catalytic system of both hydrotalcites via adsorption form the solution of Ce-EDTA complexes (3 wt.% Ce3+ aqueous solution), resulting in samples H-Ni-aCe and H-NiZr-aCe. Materials underwent calcination at 550°C for 4h under flow of air and were subsequently characterized by XRD, H2-TPR, elemental analysis, N2 sorption, FTIR and CO2-TPD experiments.

Catalytic tests were carried out in a fixed-bed reactor at 550, 650 and 750°C. The total flow of feed gases was equal to 100cm3/min (CH4/CO2/Ar=1/1/8; GHSV=20,000h-1). The products of the reaction were analyzed by Varian GC-490 micro-GC. Prior to each catalytic test, the samples were activated  by reducing  with H2 (3%H2 in Ar, 1h at 900°C). In order to establish the influence of direct methane decomposition reaction on the overall process, additional catalytic tests with only methane in the feed (CH4/Ar=2/8) were carried out at 550°C.

The physicochemical characterization of the catalysts precursors and products of their thermal decomposition confirmed successful synthesis of hydrotalcite-like materials modified with Ce or Zr. The addition of cerium and zirconium species modified the basicity of tested samples and thus most probably their catalytic properties [4]. The calcined materials exhibited specific surface areas in a range from 100-160 m2/g. The highest values of textural parameters were observed for Zr-containing samples.

The results of catalytic tests revealed that all  catalysts were active in the DRM reaction at 550, 650 and 750°C. The obtained conversions of methane and carbon dioxide for the prepared materials at 550°C followed the sequence: HNi > HNi-aCe > HNiZr-aCe > HNiZr. However, the obtained distribution of products of the DRM reaction,  suggests that activity of each catalyst is quite different in obtained values of H2/CO molar ratio and the overall process is influenced by the occurrence of side reactions. The un-promoted catalyst showed excess of H2 in the products of the reaction, pointing to the occurrence of direct CH4 decomposition. The addition of promoters (especially Zr) inhibited this side reaction, which was confirmed in additional catalytic test with only methane in the feed. The differences in conversions of methane and carbon dioxide between the studied samples decrease with increasing  temperature. At 750°C all  tested catalyst showed CH4 conversion of ca. 86% and CO2 conversion of ca. 90%. The obtained values of H2/CO molar ratio at 750°C were also similar and closed to unity. The difference in catalysts performance was shown by the measurement of coke deposition by TG experiments after reaction, the lowest shown for zirconia promoted samples.

The obtained results showed that the catalytic activity of Ni-catalyst depends strongly on the promoter used in low-temperature dry reforming. The addition of zirconia prevents the occurrence of direct methane decomposition, but, on the other hand, RWGS reaction is well developed over Zr-promoted catalyst. The addition of ceria results in increased CO2 conversion and H2/CO close to unity, pointing to the increased oxidation of carbon deposits. The promotion of Ni-based catalyst with Ce or Zr results in increase in catalyst stability.

Preview Presentation:
Presenter(s):
Radoslaw Debek
Once the content has been viewed and you have attested to it, you will be able to download and print a certificate for PDH credits. If you have already viewed this content, please click here to login.