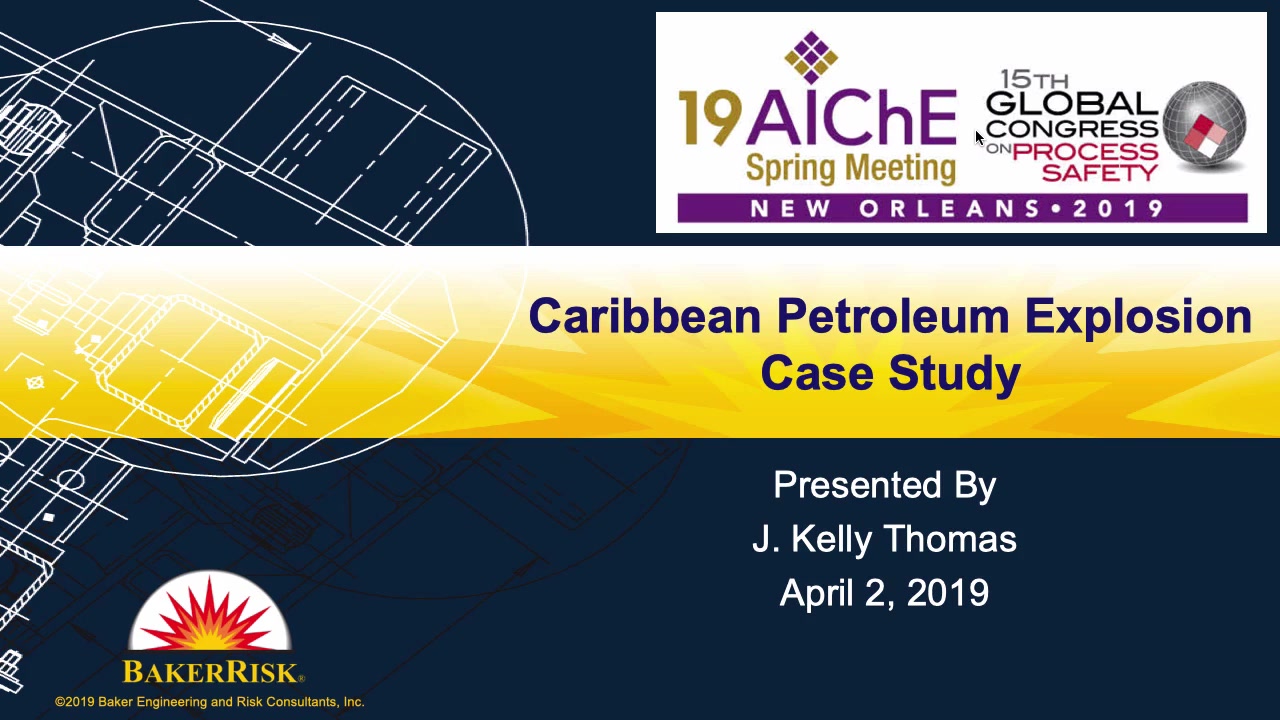 A vapor cloud explosion (VCE) occurred at the Caribbean
Petroleum site in Bayamón, Puerto Rico on October 23,
2009 shortly after midnight.  An above-ground
gasoline storage tank (Tank 409) was being loaded from a cargo ship
shortly before the incident.  Overfilling
of Tank 409 resulted in gasoline discharge through elevated tank vents and
the creation of a very large vapor-mist cloud, which extended off the plant site
into surrounding areas covered with heavy vegetation.  Approximately 5,000 barrels (210,000 gallons,
790,000 liters) of gasoline were released, creating a cloud with a footprint of
roughly 3x106 ft2 (70 acres, 0.3 km2).  The over-fill was halted roughly 10 minutes
prior to the VCE.  The cloud was ignited
at an electrical equipment enclosure outside the electrically classified
area.  The resulting VCE caused blast damage
to both on-site and off-site structures.
Fires were ignited in a number of other storage tanks within the tank
farm, which burned for several days.

Based on comparisons with the damage observed by the authors
both on- and off-site, it was concluded that the VCE preceded as a
deflagration, with vegetation located outside of the tank farm representing most
of the congestion responsible for the VCE.
The flammable cloud did not reach the congestion associated with the
adjacent decommissioned refinery process units; these congested areas therefore
did not participate in the VCE.  The tank
farm itself is an area of relatively low congestion.  Contrary to some reports in the literature,
which appear to have focused primarily on individual damage indicators within
the vapor cloud, the results of this investigation indicated that the VCE did
not precede as a detonation (i.e., a deflagration-to-detonation transition did
not occur).  Additionally, contrary to
the findings of some of the other investigations of this incident, it was
concluded that the flame did not propagate through the east-west sewers.

This paper will present key findings from the investigation,
the basis for these findings, and the main lessons learned from this incident.

Preview Presentation:
Presenter(s):
J. Kelly Thomas
Once the content has been viewed and you have attested to it, you will be able to download and print a certificate for PDH credits. If you have already viewed this content, please click here to login.

Tutorial on Auto-Refrigeration and Brittle Fracture Analysis (Part 2)
The tutorial is aimed at entry level to seasoned veteran engineers that desire to have a better understanding of this multidiscipline process safety risk. Part...
Applying Risk Principles to Combustible Dust Operations at a Multinational Manufacturer
JENSEN HUGHES performed a risk-based analysis for three combustible dust handling processes that are prevalent throughout our manufacturing client's enterprise...